The Tour According To G

7
10
A great insight into the life of a Tour de France winner, in G's inimitable style
Weight:
530g
Contact:
www.quercusbooks.co.uk
How we test

For many people, watching Geraint Thomas win this year's Tour de France was one of the 'feel good' stories of the race, and in The Tour according to G he gives us the inside story of what happened before, during, and after the event. Most people would accept him as a deserving and obvious winner now, but we read here that wasn't always the case.

Thomas has teamed up with Graham Fordyce to give us a 'behind the scenes' account of this year's Tour de France. It has a similar style to his previous book, which came out in 2015 and was also ghost-written by Fordyce. As you might expect, that first one was a more complete biography, and contained a broader range of insights from Thomas. It is a good complement to this book. What both books have in common is enough of that unique Thomas style to appeal to those who appreciate his pithy comments, wry humour, and revealing anecdotes – and which makes him such a worthwhile interviewee.

Thomas's wife Sara has obviously played a bigger part in his life since their marriage in 2015, and there is a bit more information about his life off the bike than last time. Curiously, for someone who is almost universally known as G, he is called Ger at home. I can't see it catching on.

Although the main focus of the book is le Tour 2018, there have been a few races since the last book where everything should have been in place for Thomas to achieve a career-changing result – but instead he simply reinforced the view that he tended to 'snatch defeat from the jaws of victory' with a crash, or some other mishap.

The Olympic Road Race in 2016, the Giro d'Italia in 2017, and the Tour de France in 2017: these were the most important races of the year for Thomas, and he had the form, with the tactics working out well – but then he lost his opportunity to win them.

Thomas reveals a lot about the thoughts of an elite athlete in the immediate aftermath of such disappointments, but it is impressive to see how this spurs him on, believing that 'it will happen eventually. One year, one race, I will show them.'

With the benefit of hindsight most people would agree that Team Sky should have given Thomas the position of team leader much earlier in this year's Tour, with all the support that status merits – and it is clear that Thomas would have liked that reassurance. Instead we were treated to days of uncertainty.

The most obvious display of a rider's status is where he is positioned in the 'Sky train' as it thunders along at the front of the peloton, with Thomas only occupying the coveted last place during the last few stages, after Froome had declared that 'for the next three days I'm riding for [Thomas]'. 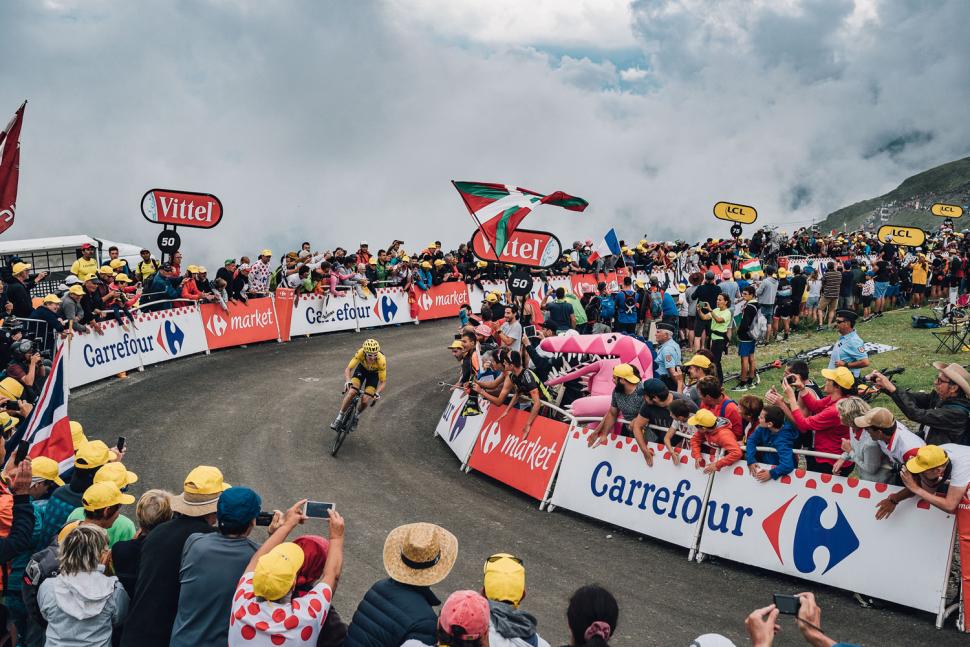 The team's decision not to give Thomas full protection from the start could have backfired very publicly as early as the stage three Team Time Trial, where in the event of any rider experiencing a problem the ruling was that 'we're only waiting for Froomey'. Despite thinking, 'Hmm. That's a bit shit, to be honest. Fucking hell guys, could you really not wait for me?', Thomas just puts his head down and doesn't let this distract him from the job in hand – confirmation that you need mental as well as physical fortitude to succeed at the highest level.

Thomas also reveals a less obvious manifestation of his standing in the team: the electrics in one hotel could only cope with the demands of running air conditioning in one room – and that one room was Froome's. 'Right. So I'm second on GC, more than a minute ahead of Chris, and it's him who gets the cool air and good night's sleep?' In a small display of defiance Thomas decides to use his air-con anyway, fortunately with no harm done – and once again he remained calm and in control.

Good though it was to read about Thomas's thoughts surrounding each day's racing, I found it just as satisfying to hear about life after the race had ended. It starts with a reprise of his entertaining victory speech, then the story behind that mic drop, both of which were very 'G'.

'All I can say is there was an awful lot of pent-up fun that needed to escape. Barely a single drink for nine months, every night an early one, every meal much smaller than one would ideally like. It's going to have an effect in the end.'

Combine them both and you suspect that Thomas will not be starting his winter training as early as usual, nor with his usual fitness. But, as Thomas might say, you have to make the most of the opportunity, don't you?

> Buyer's Guide: 28 of the best books about cycling

There are several contributions from other interested parties scattered throughout the book, mostly from within the Team Sky camp. Unfortunately, I felt that they added little: no revelations, mostly just bland agreement that G deserved this victory and how pleased they all were for him.

What next for Thomas's literary career? If he feels the need to win a major event before producing another book, then a 'Giro according to G' would be nice – or perhaps a 'World Championship according to G', after next year's home event. However, according to this interview it seems just as likely that we will see an 'Ironman according to G' book.

A great insight into the life of a Tour de France winner, in G's inimitable style

Make and model: The Tour According To G, by Geraint Thomas

The inspirational inside story of the 2018 Tour de France from Geraint Thomas, the first Welshman and third Brit ever to win the Tour

"This year G was the strongest rider, and he finally had Lady Luck on his side. An unstoppable combination" Chris Froome

"I understood what Geraint's win meant: for him, for me, for the team, and for Wales, too" Dave Brailsford

For years Geraint Thomas appeared blessed with extraordinary talent but jinxed at the greatest bike race in the world: twice an Olympic gold medallist on the track, Commonwealth champion, yet at the Tour de France a victim of crashes, bad luck and his willingness to sacrifice himself for his team-mates. In the summer of 2018, that curse was blown away in spectacular fashion - from the cobbles of the north and the iconic mountain climbs of the Alps to the brutal slopes of the Pyrenees and, finally, the Champs-Elysees in Paris. As a boy, G had run home from school on summer afternoons to watch the Tour on television. This July, across twenty-one stages and three weeks, and under constant attack from his rivals, he made the race his own.

With insight from the key characters around Geraint, this is the inside story of one of the most thrilling and heart-warming tales in sport.

Not only can nice guys come first - they can win the biggest prize of all.

Title: The Tour according to G

Average value at full price, but readily available at half that.

Continues the theme of his previous book.

Not as rewarding as his previous book.

Does a good job of giving some insights into G's thoughts as a rider, but only within the limited parameters of this year's Tour.