8
10
Beryl has fixed the issues with the original and reduced the price, an impressive and innovative light
Innovative safety features
Decent battery life
Good visibility
Mounting to the bar can be a little fiddly
Weight:
99g
Contact:
beryl.cc
How we test

The Beryl Laserlight Core offers the innovative safety elements of the original Laserlight at a more affordable price. It pumps out a decent amount of light, now with a 400-lumen Day Flash, and battery life is good too.

When riding in London in 2020, one thing you are guaranteed to see is green lasers in the shapes of bikes on the road after dark. This is the work of Beryl (previously known as Blaze), whose original Laserlights were fitted to Santander bikes.

You can still buy the original Laserlight, but Beryl has now released this Core version, which costs £55 less but still offers the green laser.

Where the original Laserlight was made from high-grade aluminium, the Core is black plastic. Aside from the material changing to a cheaper alternative, there is little else here that isn't as good or better than the original. 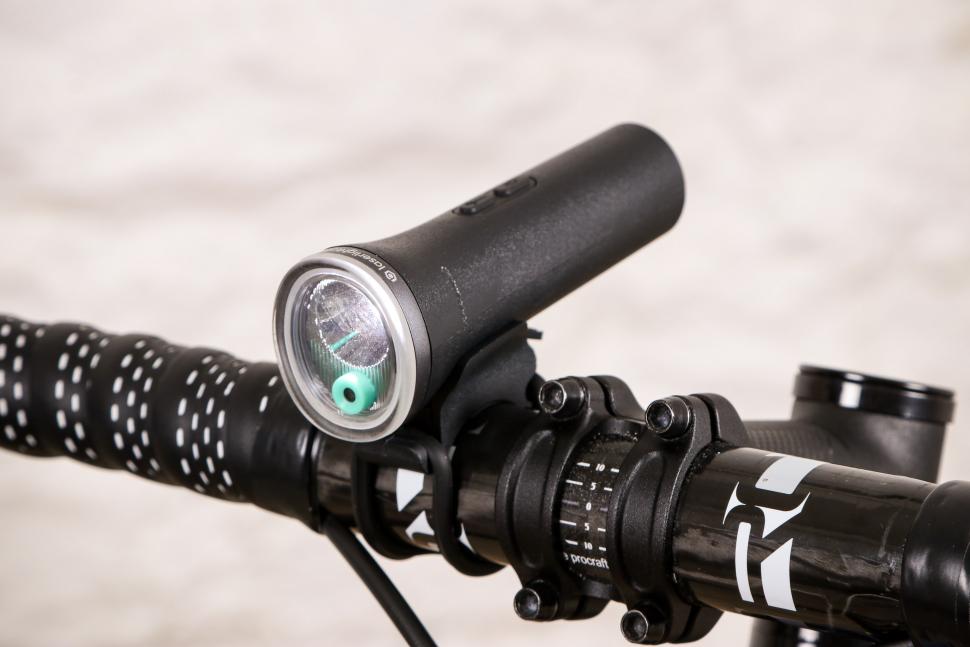 As with all lights, a key element is brightness. The Laserlight Core pumps out the same 300 lumens at 100% as its older and more expensive brother, but whereas the older model had three modes, High, Low and Flashing, the Core has a 400-lumen Day Flash too.

I found the solid High more than bright enough for urban riding and for all but the roughest lanes, though I'd want something a little more powerful for gravel and riding in heavily potholed lanes at night.

Beam shape is circular, which offers both deep and wide visibility. On dark roads I could see more than enough around me, while still being visible to other road users.

The key element that sets this light aside from others is not its brightness, though, it's the laser that projects a bright green bike in front of you. I used the original Laserlight when it was first released and was impressed with how effective it was. Happily, this cheaper version still offers the same laser performance. 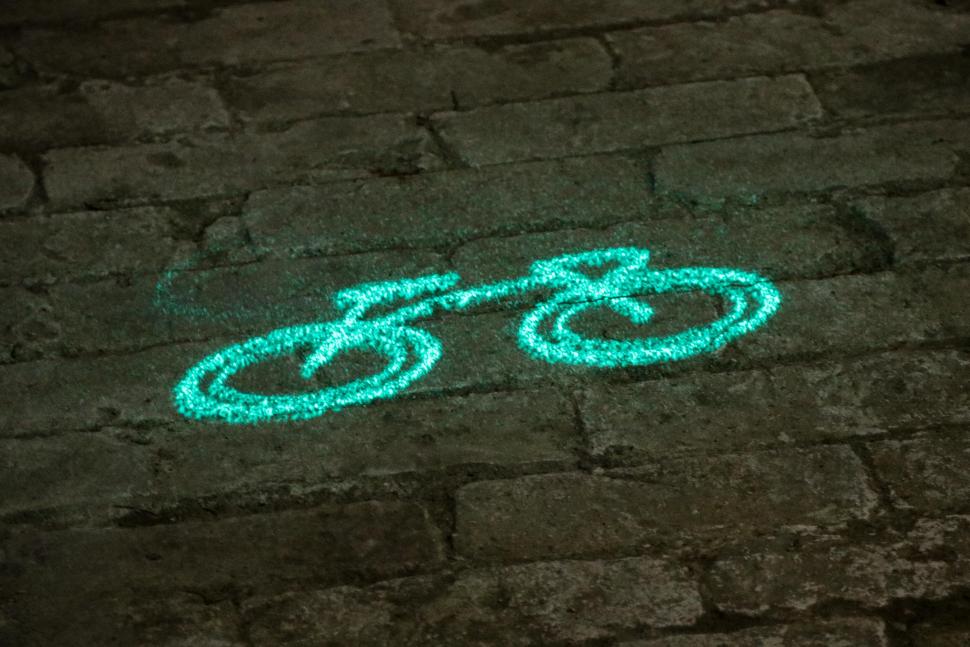 As you might expect from a laser, it doesn't project perfectly on wet surfaces so use in the rain isn't great, but otherwise the innovative design offers extra visibility in other conditions.

The laser can be set to flash, constant or off, and is operated by a separate button on the top of the light, pressing the button to cycle through. The other button controls the light itself and its four modes: High, Low, Flashing, and Day Flash. These can be cycled through with a press of the button and turned on/off with a hold.

The Beryl's bracket is attached to the handlebar with a rubber ladder strap which hooks into a cradle mount that the light slides into. It's a little fiddly because the strap has a tab on one end which, when attached in the way that seems to be logical, gets in the way of the light sliding on. This isn't a major design flaw, just a slight annoyance, and it holds the light steady. 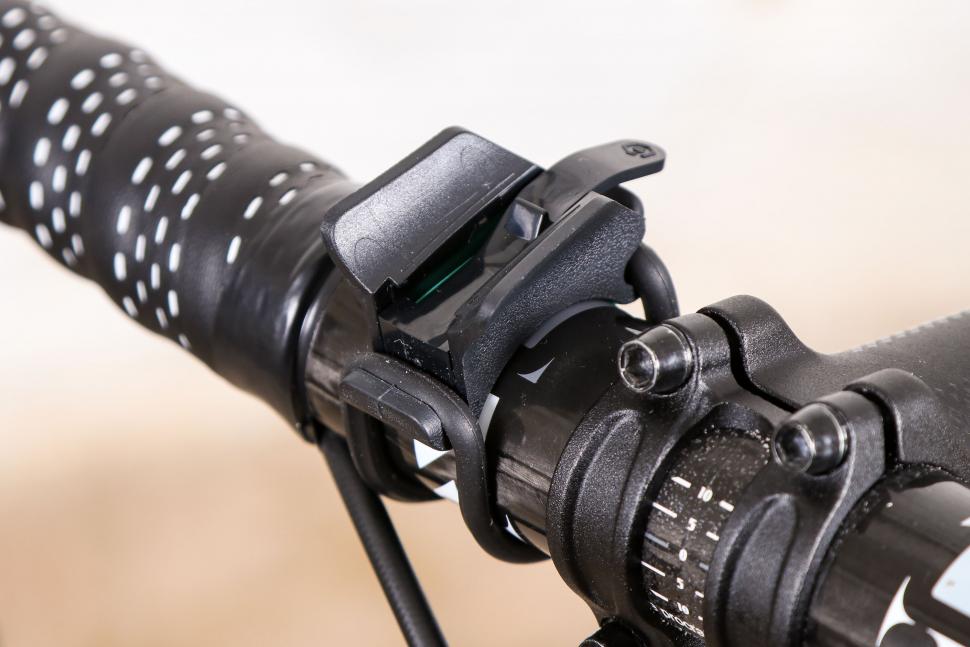 This is important, otherwise it would just end up a green smudge in front of you. I only really noticed jitters on the laser when I was going over particularly rough roads or cobbles. With the significantly increased contact area of the mount, compared with the original, it holds a sturdy position far better, and keeps it lower and less intrusive on the handlebar too.

When I reviewed the original in 2014, the biggest single issue I found was that it literally fell off the handlebar. Beryl has not only fixed this with the new model, but made a genuinely secure mount.

The Beryl has a maximum battery life of 41 hours if you have it on Day Flash with the laser off, and a minimum of 1:30 if you have the light at High and constant laser. I tended to use the light on Flashing with the laser also on flashing, which Beryl claims would give me 13 hours of battery life, and that seems about right. I found that I was charging it roughly once a week when commuting.

Charging is done through a Micro USB socket that sits under a waterproof dust cover. This is another element that's an improvement over the original: rather than having a specific charger, Beryl has opted for a standard connection, which you're always likely to find lying around somewhere. Charging to 50% takes around an hour, and getting to 100% is around 4 hours.

The Laserlight Core costs £69.99, which seems a good price. The only genuine comparison is to the original, which comes in at £125 and, I genuinely believe, is only superior in terms of the material used.

The only other widely available option that uses lasers in a similar way is the Lezyne Strip Drive Pro 300 rear light that Emma took a look at in October. This came in £10 cheaper, which isn't surprising given it's a rear light that doesn't need to be as bright.

Overall I was really impressed with this lower priced Beryl. The issues that the older version had have been fixed, and the lower price makes it considerably more competitive. The mount now holds the light in place securely, you don't need a special adapter to charge it, it has a Day Flash, and it's a good size on the bar. Beryl has managed to upgrade its light and make it cheaper.

Beryl has fixed the issues with the original and reduced the price, an impressive and innovative light

Beryl says: "The Laserlight Core has Beryl's patented laser projection technology, combining a white light and a laser image to beam out of blind spots, junctions and situations where you're otherwise unseen."

Up to 41h on a single charge

Well made. Beryl has sacrificed the high-grade aluminium for plastics, but maintained a high level of build quality.

Very easy to use. Two buttons to operate it, and removing the custom charger makes it infinitely more practical than the previous version.

The previous version's mount wasn't up to scratch, but here the mount holds everything in place well, although the rubber loop and hooks is a little fiddly.

No issues when used in the rain several times.

Did everything better than the previous, more expensive iteration, now with a Day Flash too.

The plastic may not be as durable as the original's aluminium, but given that the mount is infinitely better it's going to last much longer by not skidding across the road.

It's £55 cheaper than the original and considerably better.

Very well. In wet conditions it isn't great, but most of the time it works fantastically.

The new mount, especially when you compare it to the older version.

The hook and loop is a little fiddly.

The only genuine comparison is to the original which comes in at £125 and I genuinely believe is only superior to this in the material used. The Lezyne Strip Drive Pro 300 that Emma took a look at in October uses lasers in a similar way and is £10 cheaper, but it's a rear light and doesn't need to be as bright.

This light was created as a cheaper version of the original, and outperforms it in every department. I was impressed by the innovative safety elements of the original but annoyed by some of the key features. Those have not just been fixed but improved, at a much more competitive price.