6
10
Great light, but badly let down by its bracket
Weight:
215g
Contact:
shop-blaze.myshopify.com
How we test

Much has been said of the Blaze since it became one of the first genuine success stories on Kickstarter. So as somebody who has been following the progression of the company ever since, I was excited to try out the finished product.

When you first receive the light, two things are clear: It is beautifully designed and it is sturdy. It has a claimed weight of 182 grams, but the road.cc scales of truth bring it in at 215, which is heavy, but comparable to the Moon X Power 720. However, it must be noted that this is not a light designed for night sportives, it is very much an urban safety light, where weight is of less importance. 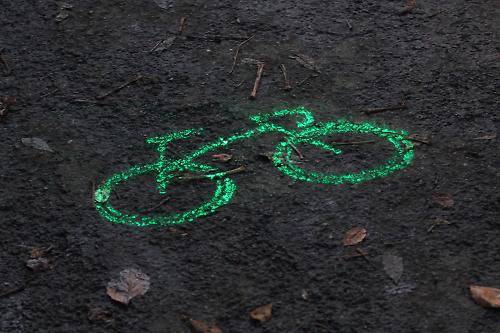 The sturdiness comes from it feeling solid (heavy) and being machined with an aluminium casing with diamond cut edges and an etched, silver nickel control panel. The light itself, is well designed and there has clearly been thought put into how it functions on a practical level.

It has two buttons on the top, one which control the light sequencing (flashing 100 lumens, solid 100 or solid 300) and the other which controls the laser (solid or flashing). Sitting at 11.5cm by 4cm, with a 4.5cm height it is certainly not compact either, having looked around at the thousands of cyclists I see, I am hard pressed to remember a time where I have seen a larger one.

That being said, it is a good looking light and makes a nice change from the standard plastic shelled units that most people tend to use, so it is not an ugly thing that floats on top of your bars. When in use, the light is fantastic. I tended to use the 100 lumen flashing sequence with the laser also on flash. The laser itself is a clear safety benefit, shining out to varying distances in front of the bike (depending on the angle that you set the bracket). I noticed cars identifying it and I had several conversations with people who asked me about it. One was a police officer who told me how he would have never have known that I was there without the laser.

Clearly much thought has been put into the design of the light, with battery life matching the quality of the build. Having used it on various settings for a few weeks, I have only needed to charge it once, so I can believe the claimed 13 hour battery life. I have also used it as a main light for illumination rather than visibility, and can safely say that it is the best forward facing light I have used.

However, all of the thought on the light itself seems to have been undermined by the bracket. I have unfortunately found multiple, issues whilst using it.

The first being the actual attachment to the bars themselves. It is as easy as Blaze claim, to use the Allen key provided to attach it to your bars and there are different thicknesses of rubber protectors designed to stop the metal bracket scratching the paint from your bars. These only attach at one end though, meaning that the underside of the bar need to be fiddly adjusted to make sure that the rubber sits properly.

On most bars, the only place to put lights is on a slight slope, so I have found that with the weight of the light, it has shifted slightly off the rubber and scratched my bars. Which when you have invested in a good quality bike, is not something that you want accessories to do. 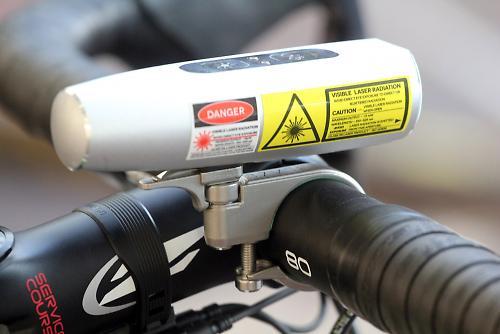 Secondly, the light sits within a coupling in the bracket. This consists of a hollow bolt with one side machined flat to allow the light to clip below it. To keep this in place is a bolt facing upwards that is tightened with an Allen key. This is a design flaw, as the weight of light will naturally loosen the bolts meaning that I had one fall out onto the road within the first week of me using it.

It is further let down by having a heavy light on a clip that has little gripping space. I found out that this was not close to being enough when I went over a speed bump at 16mph, the beautifully sculpted light came loose from the clip and clattered along the road. The fact that it still works after skidding for a good 20 metres is testament to the build quality, but it is now dented, scratched and held in place by a zip tie to stop it happening again.

It costs £125, which is very expensive for a bike light. Admittedly the actual unit is very well made, but if I saw my £125 bike light skidding across the floor due to a badly designed bracket, I would not be impressed.

Blaze will undoubtedly improve in the future and the actual functionality of the light itself is good. Blaze told us that they have had similar feedback from early users of the light regarding the bracket and that they have made some changes to the exsisting clamp including to the coupling and the yaw bolt and they are currently prototyping new clamp designs.

This is essentially a great product if you ignore the bracket. It does what it is advertised to do with a bright and easily visibly laser that alerts other road users to your presence. I even found that it worked well on uneven or wet surfaces, which is one of the aspects that I was particularly sceptical about.

The fact that this promises so much and functions well after being zip tied to my bike, just makes it more annoying that it is badly let down by a bracket that does not belong on a £125 light and hopefully will be scrapped in the next edition.

Great light, but badly let down by its bracket

The light is designed for urban cycling to allow for added visibility with a bright laser that projects an image in front of your bike.

Blaze claim that the core idea of the light is safety and the increased visibility on the road. In this regard it does what it should and does significantly increase visibility, minimising blind spots and allowing more peace of mind whilst cycling in busy urban environments.

- Laser projects 5-6 metres ahead of you

- 13 hours of light each full charge

- Smart-mode warns you if battery low

The light itself is very well constructed, quality material has been used throughout and this is evident with a robust and solid feeling light.

Design of the light itself is good, very easy to use and had no problems with operation. It was very well designed

Not enough gripping room, bottom bolt falls out. The bracket really needs to be completely redesigned for the next iteration.

No problems with waterproofing or temperature fluctuations, even after being dented and scratched after falling from the bike.

Recharges in around 3 hours from a laptop, which is fine whilst sitting in an office after using it to commute. Battery life is good and will easily be enough for most users.

The light illuminates well and the laser itself is clearly visible in a range of conditions.

Still working fine after taking a tumble that would have been the end of most lights.

Rate the light for weight, if applicable:
6/10

Heavy for a light, but this would never be found in a race or on a big hill climb.

Very expensive for a light, the quality of the construction may be very high, but not sure whether £125 can be justified for a light.

In terms of increasing visibility and lighting the way in urban environments, this light functions well. In terms of staying on your handlebars or not having the feeling of constantly needing to check if it is about to fall off, less so.

The laser is a very strong selling point, combined with a very impressive illumination and battery life.

The bracket. This belongs nowhere near a light worth £125.

Put a new bracket on this and this would be a genuinely great product. As it stands at the moment, I would not want to have a £125 light that could fly off my handlebars as easily as this one did.