5
10
Innovation and build quality can't disguise the fact that this is a fairly average and expensive commuting light
Weight:
116g
Contact:
www.silverfish-uk.com
How we test

Although the Knog PWR Rider is a 450-lumen front light and a power bank wrapped up in one, you'll pay for that in weight and price. More importantly, that headline output just doesn't feel that bright.

In many respects, it's very similar to the PWR Road front light I tested a couple of months ago. The major difference is that the Road is part of Knog's modular range, which means you can attach and detach different light heads to different power bank bodies. In the PWR Rider's case, what you see is what you get and this is one single self-contained unit. In truth, I'm not so bothered about that. Because of the way Knog has designed the lightheads and power bank bodies, although they may be technically interchangeable, using a more powerful lighthead on a smaller capacity battery body – or vice versa – looks a little ridiculous to me.

The PWR Rider main body is made from CNC'ed aluminium and feels suitably robust. There's a plastic cap at the back to cover the USB charging and micro-USB recharging ports (the cap isn't stored anywhere when not in place, so don't lose it). The handlebar clamp – which new owners have to bolt on themselves – is a straightforward silicone affair. And it's all suitably waterproof, quite happily dealing with the worst of the British weather and even a quick bike wash.

The PWR Rider is a little heavier than a typical 450-lumen light, thanks to the 2,200mAh battery-cum-power bank. The positive side of that is you get a decent run-time on full power of even more than the two hours Knog claims. Charging time takes – officially – five hours, although, again, the Australian brand sells itself short slightly and I charged it up from empty in a little less than five. A handy four mini-LED arrangement on the light body lets you know how much charge remains. 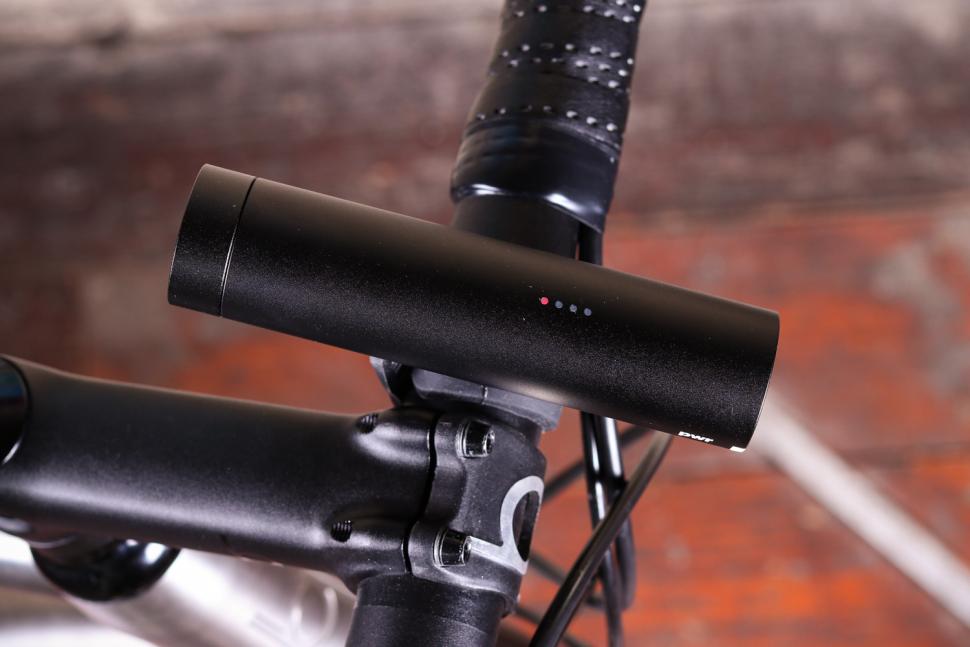 In terms of modes, the PWR Rider comes with six as standard, although you can tailor performance to your own specific requirements using Knog's ModeMaker, which allows you to add, remove and arrange lighting modes to your heart's content. Out the box, you have Ride (450 lumens/2 hours 15 mins as tested), Commute (190 lumens/5 hours 30 mins), Stamina (50 lumens/16 hours), Pulse (320 lumens flash/7 hours), Strobe (190 lumens flash/10 hours) and Eco-Flash (50 lumens flash/90 hours).

So, to action, mes braves. Because of the modest output, for night riding I generally stuck with the full Ride mode and the first thing to notice is that the beam is wide, which is quite effective for illuminating the sides of the road. However, that does have its down sides. Compared to its 600-lumen PWR Road cousin I tested, those 450 lumens look about correct relatively speaking. But the Road felt a trifle underpowered compared to the competition, and therefore, so is this one. There are other 450-lumen lights out there that offer more effective illumination performance. Possibly this is down to that wide beam shape. That said, as a commuting light for spending most of your time under street lighting, it's fine.

And what about its other trick as a power bank? It's simple to use and it does that without any great fanfare. Knog claims it'll top up your iPhone by 35% over three and a half hours, which fits roughly with what I saw: it recharged 10% of my iPhone XR in about 40 minutes. Essentially, there's no shortage of lights with this kind of performance, and most of them are significantly cheaper than the Knog.

With that in mind, it's hard to recommend the PWR Rider. OK, it might be handy if you tend to have your bike with you whenever you really, really need to recharge your phone. For many riders, though, having charge in their light is arguably more important than having it in their phone. And with the options for recharging devices while out and about becoming more convenient, you could just carry a charging cable, plug adaptor and cross your fingers (or just charge your phone before leaving home, numb nuts).

So the Knog PWR Rider is beautifully made, beautifully packaged, and – combined with the ModeMaker app – a clever idea. It's also too expensive, too heavy, not too bright, and – as an innovation – possibly a few years too late. With Christmas round the corner, this is the kind of product that would make a great gift as a bit of novelty, but probably wouldn't be the first choice front light that any rider would buy for themselves.

The PWR Rider front light is a 450 lumen front light which doubles up as a power bank for recharging other devices.

Knog says: "PWR Rider is a 450 lumen bike light that can also be used as a power bank. Includes the option to program your brightness and runtime (through ModeMaker app), then use your remaining battery to charge your devices. The light outputs in an elliptical beam for broader, brighter road coverage; has a 2 hr runtime at max 450 lumens and 4 smart battery indicator LEDs to let the rider know how much charge is left in the light."

Very well made – sturdy but not heavy.

Pretty simple really, although I found getting the rear cap off to access the power ports a bit tricky at times – there's not much to grip onto.

It's a fairly straightforward silicone strap, so nothing to get too excited by.

Run-time on max output (450 lumens) was actually a little longer than the 2 hours Knog claims – I had it timed at 2 hours 15 mins. To fully recharge from empty takes just less than 5 hours.

It's OK, but it's not the most effective light I've tested with around 450 lumen output. That might be because of the wider spread of light – to the sides – that the PWR Rider provides.

The power bank means this is not light for what is a fairly modest output front light.

Compared to other lights with around the same type of lighting performance, it's pretty expensive. Of course there is the added power bank functionality, but you pay for that in price and weight.

It's OK as a commuting light, but I would have liked a bit more brightness. As a power bank, it works fine.

The Lezyne Mini Drive 400XL costs just £30 but only has a 400-lumen max output run-time of an hour. Better is the Ravemen LR500S with 500 lumens of full power and a run-time of 1.6 hours for £34.99. Or there is the Kryptonite Street F-500, again with 500-lumens max brightness, a run-time of 1.5 hours, for £44.99. Essentially, there's no shortage of lights with this kind of performance, and most of them are significantly cheaper than the Knog.

Did you enjoy using the light? Yup

Would you recommend the light to a friend? Don't think so.

There's lots to like about the PWR Rider in theory – the build quality is ace, the power bank functionality might be useful, and even the ModeMaker customisable features are handy. But when it comes to the job for which it was designed – lighting the road ahead – it's really only average.