7
10
A decent light for general commuting duties or getting you out of a jam but it's up against cheaper rivals
Weight:
151g
Contact:
www.freewheel.co.uk
How we test

The Kryptonite Street F-500 is a great light for the rider who wants to see as well as be seen without spending a fortune. With decent enough outputs and burn-times, it's ideal for the urban commuter or those using unlit main roads. Its simple spot beam makes it a little less accomplished out in the sticks, but it'll do a decent job if you get caught out after dark.

The F-500 is right on the cusp of having enough light to see by rather than just be seen, as long as you stick to wider main roads with painted markings and cats-eyes. As Sean found when he tested the F-450 back in 2017, the Kryptonite lights tend to have a very spotlight orientated beam pattern (as you can see in our beam comparison engine above) with very little illumination bleeding out to the edges, which makes it difficult to judge verges and the like on dark country lanes at speed.

The 250 and 80-lumen medium and low modes didn't really got much use, as if I was in town under street lighting or it wasn't fully dark I'd use 'Nitelite Pulse' which keeps the LED on at 80 lumens constantly, interspersed with a 180-lumen flash. You get a Daytime Pulse mode too, which does the same but with a 500-lumen flash – great for getting you seen even in bright sunshine whether negotiating the road network or filtering through traffic.

The burn-times are pretty decent for a light of its size, with a claimed 1hr 30mins on full, which doubles to 3hrs for the medium 250-lumen mode. The Daytime Pulse gives 8hrs, Nitelite Pulse 10hrs, and the Economic Flash mode (80 lumen) allows for a full 24hrs of riding.

Although 1:30hr isn't hugely impressive (Kryptonite claimed 2hrs battery life for the F-450), after a few charges I could achieve between 1:45 and 1:50 on full so it's no major issue.

Battery life is portrayed by the on/off button lighting up with the usual traffic light system, moving through green to amber to red as the juice starts to run out. When it turns to red you have 25% left and should it drop to 10% the light automatically swaps to the lowest power setting so you can get home.

A full charge takes just over a couple of hours, so if you are a commuter it's easy to top it up during the day. The USB charge point sits behind a rubber cover and I had no issues with it letting water in when riding in some truly biblical rain. It also survived the bathroom shower test.

One thing I wasn't a major fan of is the clamp. It's a simple band that is a bit of a faff and fiddle to fit, especially as the actual band isn't that long to grab hold of. I also struggled to pull it tight enough to stop it rotating on the handlebar when riding over rough surfaces. 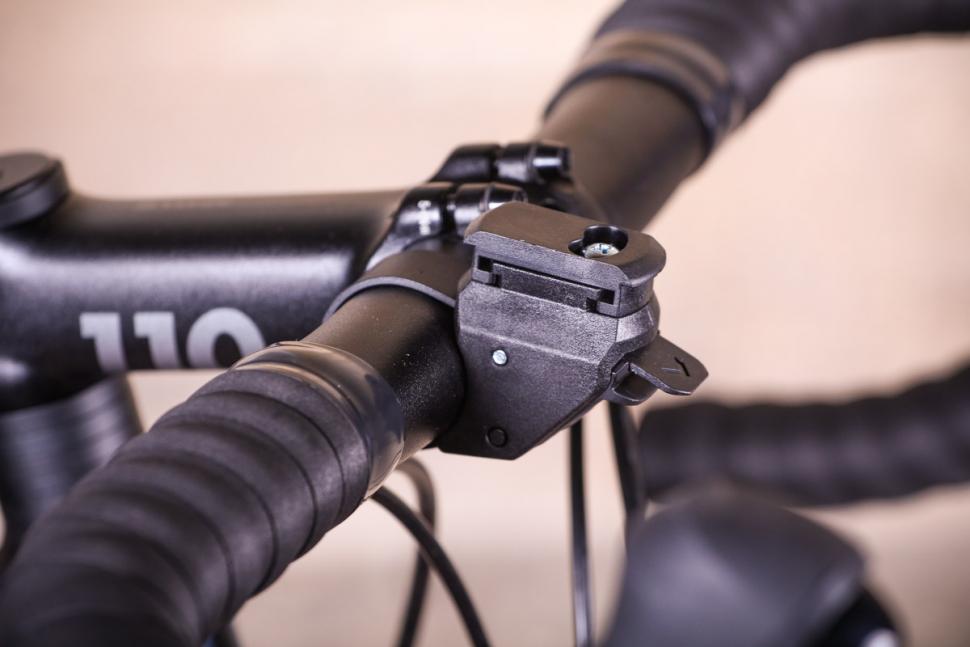 Removing the light from the clamp is easy enough, though, which is great if you are commuting and need to leave the bike locked up in public.

When it comes to price, the F-500's £44.99 isn't that bad which when you take everything into account, but you can do better. The Lezyne Micro Drive 500XL puts out the same power and is over 50g lighter, if that is important to you. The beam pattern looks better too, though it can't match the burn-times of the F-500. It also has a machined aluminium casing rather than the plastic of the Kryptonite, and costs just £40. In fact, Lezyne offers the 800-lumen 800XL for just 12 quid more than the F-500.

NiteRider makes the Swift 500 front light which matches the F-500 for burn-times and power output. It's lighter and more compact than the Kryptonite and costs just £35.

Overall, the F-500 is up against some tough opposition but if its credentials suit what you are after in a light then it does the job.

Kryptonite says (shouts?), "FOR MORE THAN 40 YEARS, KRYPTONITE HAS BEEN YOUR HIGH QUALITY LOCK PROVIDER, ENSURING YOUR RIDE IS READY TO GET YOU WHERE YOU WANT TO GO.

NOW, LET US LIGHT YOUR WAY WITH OUR STREET LIGHT SERIES.

OFFERING A COMPLETE SET OF USB RECHARGEABLE BICYCLE LIGHTS.KRYPTONITE WILL BE YOUR DEPENDABLE LIGHT PROVIDER"

FULLY USB RECHARGEABLE '' No batteries to buy or replace

Really easy to switch on and use.

I've used better at this price. Even a rubber band style setup like that found on the Lezyne models is quicker and easier to use.

No issues at all with rain and mud.

I was actually getting slightly higher than claimed burn-times.

There is some tough competition at this price point.

You are getting a decent amount of power versus battery life out of the package, although I would prefer less of a spotlight beam for general road use.

It's a bit pricier than some for the specifications, but not overly so.

Did you enjoy using the light? It delivered what I expected.

Would you consider buying the light? Possibly, there are quite a few options though.

On the whole it is a decent enough light across the board for the money, although I prefer the beam pattern of something like the Lezyne 500XL.