7
10
Best of the bunch when it comes to cycling indicators and they do work well
Weight:
76g
Contact:
useeme.bike

Cycling indicators often fall short of the mark, but these Useeme Indicator Wristbands are actually a pretty decent idea as an addition to the simple hand signal. They are bright, easy to use, and offer plenty of battery life. Whether following road users can get their head round the concept of a cyclist with indicators is another issue.

Most cycling indicators are attached to the bike, normally either side of a front or rear light, and that can be their first drawback. A bike isn't that wide, so unless you are right up behind it it's difficult to see which direction is being indicated – plus the rider still needs to hand signal anyway. Useeme putting its indicators on the wrists does away with all of those issues. They are also very simple to use.

According to Useeme's website, these indicators have been developed over the last eight years, with each prototype being tweaked and refined until Useeme reached this production model.

Each indicator is 'handed'; you need to make sure you have them on the correct arm for them to work. You put them on with the arrow to the side of the Useeme logo pointing in the direction that they are going to be indicating. 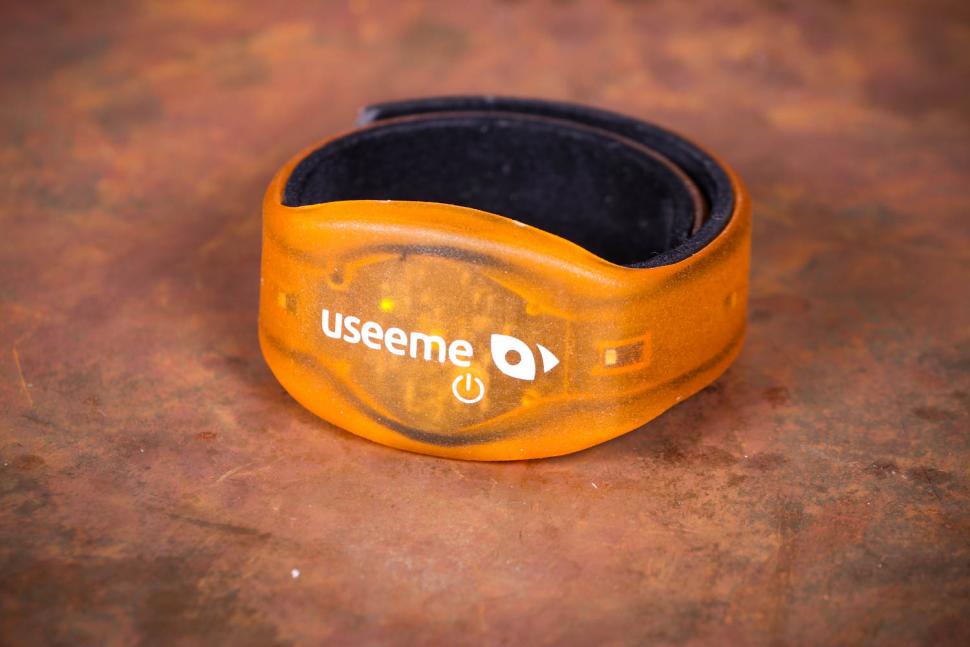 There is only one button and that is to turn them on and off, plus if you give the standby button two short presses then they will enter an emergency mode where the LEDs flash continuously.

Once switched on they work completely automatically, using various sensors and an algorithm that Useeme has created to detect when you are making hand signals. Riding on the hoods or tops, they remain off until you raise your arm to the side and away they go.

Useeme has used nine LEDs in each wristband, which it says are the strongest low energy LEDs on the market.

Rather than have an on/off flash like a vehicle's indicator, Useeme has gone for a series of high-speed flashes before the LEDs turn off and then come back on to repeat. It does make them more eye-catching, while still having that recognised rhythm of an indicator.

There is a good range of movement that the LEDs work in, so you don't have to indicate in a specific way or position.

If you lift your hand to wipe your glasses or reach down for a bottle, the algorithm doesn't set of the lights, so accidental flashing is rare. I tried loads of ways to get them to falter, but I only had one instance – when I moved my hands from the drops to the hoods – and they only flashed once before turning off.

The Useeme bands are best used in the dark; they are bright enough to be seen in daylight, but if a driver can't see your arm stuck out in front of them then a ring of orange flashers probably isn't going to be adding much benefit.

> Buyer's Guide: 12 of the best reflective garments and accessories to help keep you visible after dark

During the evening rush hour in an urban environment, the Useeme is definitely bright and distinctive enough to cut through all of the other light pollution going on, and they are helpful if you want to change lanes entering roundabouts or negotiating city centre lane changes.

The main issue is how drivers deal with the information the Useeme bands are giving them. A cyclist with indicators isn't a common sight, and in certain situations they were just totally ignored by following drivers when I indicated my intentions. I certainly wouldn't put all of my faith into them.

The wristbands run on lithium polymer batteries and Useeme supplies a double-headed Micro USB lead so you can charge them both at the same time.

Useeme doesn't give a quoted burn-time but it says that a commuter travelling two hours a day would get around two weeks of riding on a single charge and that seems about right when I put it to the test. It comes down to how much indicating you are doing, basically.

They have a battery level light built in, with the usual traffic light system in play: green for above 50%, flashing yellow for below 50% to 20%, and flashing red below that.

The USB charge port is covered by a flap that clicks closed, and I certainly didn't have any issues with wearing them in the rain.

If you really want indicators on your bike, they are a much better proposition than the £150 Blinkers Blinker Set. Admittedly, they do include front and rear lights, but there were reservations about their overall usefulness.

There are other options, like the Cycl Winglights that won investment from the BBC's Dragons Den programme, which'll set you back around the 30 quid mark. They plug into the bar ends, though, so are only really suitable for flat-barred bikes.

Would I buy them? Probably not, purely because I don't really signal that much.

Having over a decade of rush hour commuting behind me, on fast-flowing, busy A-roads and jam-packed city centres, I tend to use speed and road position – plus a dose of arrogance – to manoeuvre through the traffic.

I have had issues with cars ignoring a right hand turning signal occasionally, when riding in the dark with a black jacket and gloves on, which is why I'm a fan of gloves with reflectives – which arguably will get you noticed just as much.

For less experienced riders, though, who maybe don't have the confidence of working their way through town traffic, I can see the Useeme wristbands offering an extra level of safety and security.

As far as indicators go, they work well and are pretty much the best out there.

Useeme says, "When we first looked around on the market, we only saw complicated bike turn signal solutions that are operated by switches, or have other drawbacks.

"We thought staying safe shouldn't interfere with the simple joy that is cycling, so we had 2 clear principles to start with:

"Instead of putting something on the bike, let's make wristbands, put lights on the hands and light up the hand signals.

"Let's avoid buttons or switches and make everything completely automatic."

The Useeme indicators are a very well thought idea, especially for those who commute in darkness.

Tell us some more about the technical aspects of the light

Simply make a hand signal to start flashing, then put your hand back on the handle to stop flashing.

We put a lot of effort into programming Useeme and fine-tuned the hand signal detection algorithms. Your hand signals are always detected but the wristbands won't flash when you scratch your nose or reach down for the water bottle.

It works with all kinds of bikes and all types of handlebars, even after changing your grip.

Useeme wristbands are powered by state-of-the-art Lithium polymer batteries. A double-headed micro USB cable is included for charging, but you won't have to use it very often.

With average commuter usage (2 hours a day) you can go at least 2 weeks on a single charge.

Bright orange power LEDs emit rapid bursts of light to make sure your hand signals are always visible. The flashing is impossible to miss even in bright daylight.

The lights run around your wrist to make sure the flashing is visible to everyone around you.

The wristbands are easy to put on and flexible enough to fit all your clothes. Use them with gloves, fitness trackers, on your jacket, or your bare hands.

Microfibre padding inside makes them comfortable on bare hands. Comes in 2 sizes.

Some people only ride their bikes when the sun is out.

If you're not one of those people, you can still count on Useeme Bike Turn Signals. We built the wristbands to be very robust and withstand any weather.

Even when it's dark and rainy outside, your hand signals will be bright and shiny.

Rate the light for the design and usability of the clamping systems:
8/10

There are two sizes available and they literally wrap around your wrist. They are comfortable against bare skin but also flexible enough to be worn over the top of a jacket sleeve or glove.

Depending on how much indicating you are doing, you should get about 20 hours out of one charge. Charging takes a couple of hours and you have battery level warning lights.

The algorithm works well and they are simple to set up and use.

Their price can be seen as a bit of an outlay against something like some reflective gloves or wristbands.

Bit of tricky one to gauge as there aren't loads of these products on the market, but they're not cheap.

Would you consider buying the light? No, I explain why in the conclusion above

They won't be for everyone, and my overall thought is that they are a good solution to a problem that maybe isn't there. The key thing is that the algorithm works near-flawlessly. They are quite expensive though. 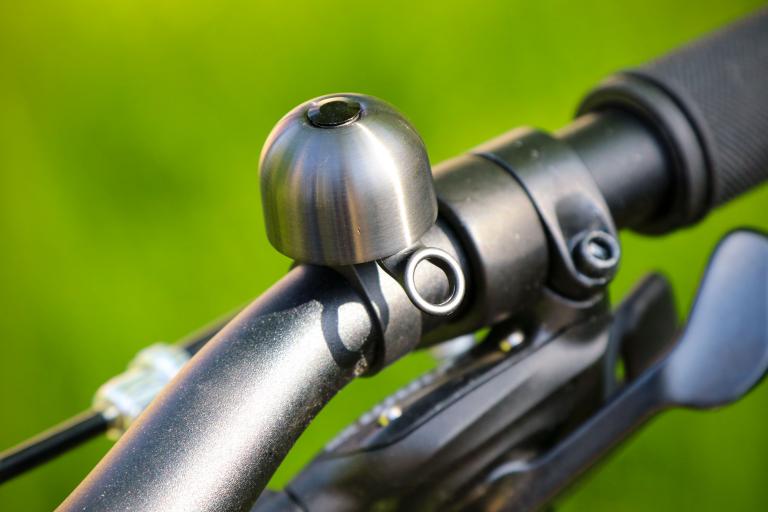 High quality and loud bell that takes up less space than the original, though it's still expensive 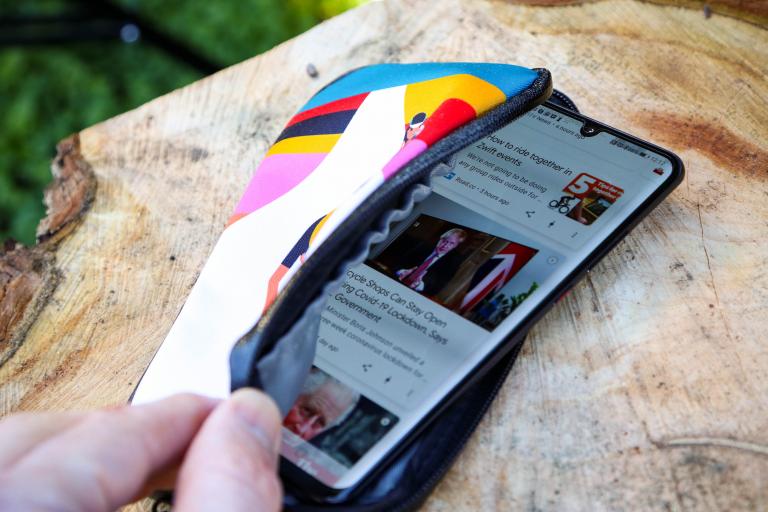