7
10
You can get cheaper, but if longevity and reliability are high priorities then this light should be on your shortlist
Weight:
78g
Contact:
exposurelights.com
How we test

The latest version of the Exposure Switch, the MK3 DayBright, has been boosted to 475 lumens which gives it the output to be considered a 'see by' light rather than just a 'be seen by'. This commuter-friendly headlight offers great quality, decent burn-times and simple-to-use modes, although as always with Exposure lights, it'll cost you.

The Switch is a great light either as a secondary source of illumination or the primary source for more casual-paced commuting, and now that it pumps out 475 lumens it is no longer restricted to use in an urban environment under streetlights for instance.

Like a lot of the original Exposure lights, the Switch offers three programs, high, medium and low, each with a constant and flash mode. Each one is selected by pressing and holding the on/off button down until the main LED flashes once, twice or thrice. Press once to switch between constant and flash.

Program one is the brightest, with that 475 lumens in the constant mode, while the flash is its DayBright option – as seen on the latest Blaze and the Strada RS. On this setting the LED stays on throughout at low power while it pulses with a single flash and then a double before going through the cycle again. It's attention grabbing and gets you noticed during the day as you filter through rush hour traffic and the sea of daytime running lights.

You'll get six hours of battery life, too; three for the constant mode.

The bracket is a simple snap fit affair attached to the handlebar via a rubber band. It works well but with vibration it can make its way upwards, so if you are using it as a light to see by you might need to keep adjusting it which is a bit of a faff. 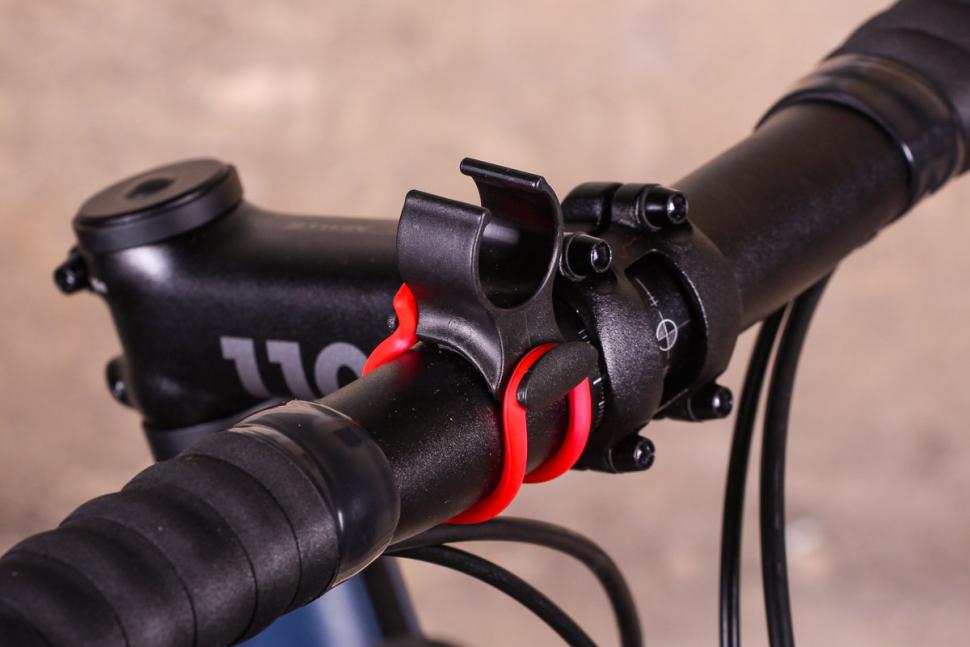 For programs two and three the output halves each time, while the burn-times double, so at its extreme on flash you'll get 24 hours out of a full charge.

Neither of these programs get the DayBright flash, they each have the more traditional pulse where the LED stays on with a consistent flash. It still does a very good job of getting you noticed without hammering the battery.

Unlike many lights, though, the Switch doesn't keep you updated on the state of the battery. When you turn the light off it does display the battery level at the lens with either a green or red hue, but there is no LED button to show you the traffic light display while it's running, so you have to keep an eye on your watch.

Considering the battery life and power output, the Switch is a very small and low-bulk light. Exposure has proved its quality over the years, and it is no different here. The CNC machined body is as tough as hell and the whole light will take plenty of knocks. The fact that the unit is built in the UK means, should you have an issue, aftersales service is quick and easy to sort. I've owned various Exposure lights since before I started writing for road.cc to the current day and if I've had issues they've been dealt with quickly.

Unlike Exposure's larger lights, the Switch is charged via a Micro-USB which makes it perfect for commuters who have access to a phone charger, rather than carrying around the specific yellow jack plug.

Depending how you charge it, the Switch will go from flat to fully juiced in less than a working day and the burn-times are realistic to those quoted.

Water ingress is the main thing that can be an issue when it comes to lights, but thanks to its rubber cover over the charging port the Switch doesn't suffer here. In heavy rain it keeps the elements out and even when giving it a blast with the garden hose I had no issues whatsoever.

Value is always the sticking point when it comes to Exposure lights; they're not cheap, but time and time again they have proved hugely reliable both in terms of the LEDs and their battery life.

For example, for the same output you could get something like the Oxford UltraTorch 500lm Headlight for £39.99, but that full 500 lumens will only get you 90 minutes' burn-time.

Another competitor is the Kryptonite Street F-500, which looks to be far superior to the Switch in terms of the amount of light it dishes out, according to our beam comparison engine. The battery will only last half as long, but the price is £44.99.

Overall, the Switch MK3 is a very good light. It's trustworthy throughout whatever weather is thrown at you, but you are paying quite a whack compared to the opposition. For an occasional light, I'd probably go cheaper but for something I need to depend on day in, day out, the Switch is hard to challenge.

You can get cheaper, but if longevity and reliability are high priorities then this light should be on your shortlist

"Available in a pack with TraceR DayBright rear light.

It's a great light for those with an urban commute or riders who may find themselves caught out in the dark.

Very simple to set the program and mode.

Absolutely great as a secondary light source, while stepping up to plate if needed as your sole illumination.

No battery level warning while on.

There are other lights out there with better beam patterns for less money, but the Exposure responds with great build quality and impressive burn-times.

Its simplistic design and amazing build quality will see it last years. It's a very good light but it is pricey against rivals; if you're happy to pay more than you strictly need to for the same power output, you won't be disappointed.