8
10
Bright, solid and reliable – which, sometimes, is all you need
Weight:
126g
Contact:
www.oxfordproducts.com
How we test

The Oxford Ultratorch 500Lm Headlight is a mid-budget front light that packs a decent punch given its price.

The light functions very well, with four settings – high, medium, low, and flash – with the brightest option giving, as you might expect from the name, a very respectable 500 lumens. It feels just about sufficient for an almost pitch black lane, though I'd definitely prefer a more powerful floodlight type for regular riding in the dark.

The lower settings in the range are bright enough for low-light rides in areas with streetlighting, or for daytime use. It's a nice touch that Oxford has included a light-emitting ring around the front of the torch, giving extra side visibility, a welcome addition that many manufacturers seem to neglect.

The mount is essentially a plastic cradle held onto the bar via a thick rubber strap. It's not the prettiest, but it worked fine on my traditional shaped handlebar, though I wasn't able to test it on an aero profile bar. The light unit itself clips very securely into the mount with a very positive 'clunk' as it goes in, and requires a good tug to get it back out. The whole mount, and the light within it, held firm on a test ride that took me down some of Oxfordshire's finest wannabe-Paris-Roubaix country lanes. 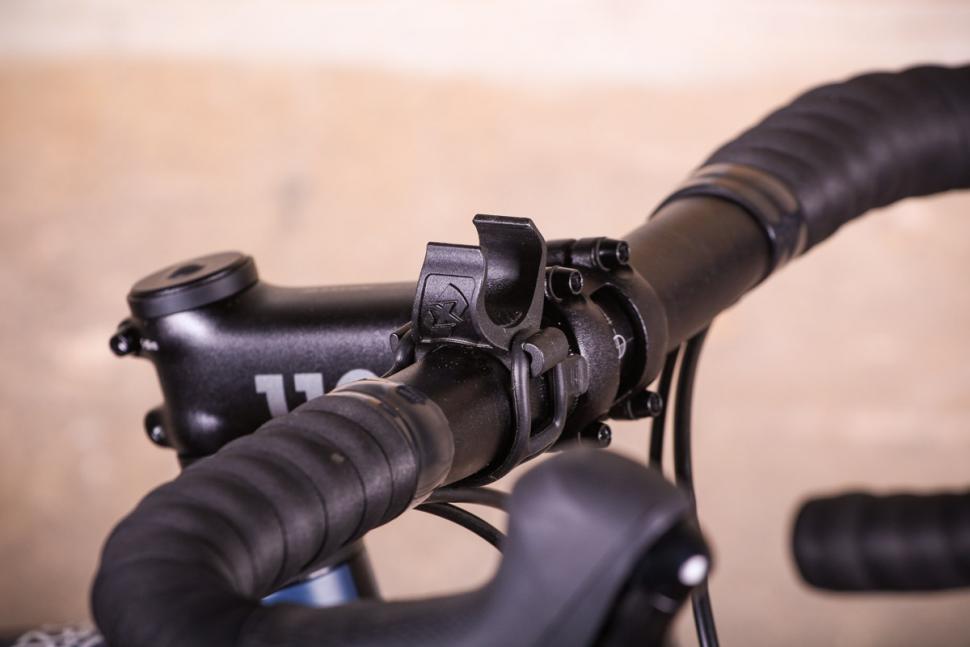 Battery life for the high setting isn't great at 90 minutes (cited and confirmed in testing), though about par for the course for a light at this price, and it's probably enough for most commutes. The medium setting is still very bright, and with a 3-hour run-time has you covered for longer low-light adventures.

You can check the battery level by holding down the power button, which then makes the light flash a number of times, with each flash representing 10% of charge. It's a bit of an odd system, and although it's not rocket science it's not the clearest or most logical of methods.

However, when the battery level drops to 20%, the power button does switch to red; on medium, it then gave around 30 minutes before the light cut out altogether.

Recharging is via Micro-USB cable, and a full charge takes around 90 minutes.

The light has a waterproof rating of IP65 (which means it can withstand non-powerful jets of water). In the real world, I tested it during a wet group ride and was treated to a splattering from the rider in front a fair few times, and it survived the muddy splashes. I gave it a quick dunking under the shower head, too, and it continued working fine.

At £39.99, the UltraTorch is pretty good value. It sits alongside the Moon Meteor X at rrp and is a penny less than Lezyne's Micro Drive 500XL, but is £5 less than the Kryptonite Street F-500 (review to come) and significantly cheaper than the Knog PWR Rider at £57.99, though the Knog does boast more features.

To summarise, the Ultratorch is a good no-frills option. It doesn't have lots of fancy functionality that some lights have, but it's bright, solid and reliable, and sometimes that's all you need.

Bright, solid and reliable – which, sometimes, is all you need

It's a solid, no-frills, mid-budget option, good for commutes and rides on semi-lit roads, though not really one for pitch black roads.

The light unit itself is solid enough. The mount looks a bit cheap and plasticky but it does the job.

Functionality is quite basic but it does it well.

The light clips into the mount very securely, and the rubber strap secures the whole assembly to the handlebar well. Even on a relatively fast run over some of Oxfordshire's Paris-Roubaixesque lanes the light held firm.

The light has a waterproof casing, and survived a group ride where the inevitable road spray from the rider in front coated me, the bike and the light. I also gave the light a few passing glances under the shower head and it's doing fine.

Battery life varies from 90 minutes on full-gas to 12 hours on flash; for all but the darkest of nights, the medium brightness mode is more than enough and that delivers 3 hours.

An indicator shows when the light is down to 20%, and there's a test mode to see what percentage the light is at for levels above that.

A full recharge via Micro-USB cable from dead took around 90 minutes.

The light works well overall. The highest setting is just about bright enough for a very dark night, though I'd say more emergency than regular use in such situations, while the low level setting is still very bright for dull days. The flash mode is great for attracting attention in daylight.

It's survived a few weeks' use no problem, and has taken a spray under the shower with no ill-effects.

Pretty good value, being slightly brighter than some similarly priced options, and cheaper than more high-end yet less bright lights.

Very well. The settings are appropriate for a light that's not marketed as a floodlight, and recharging is reasonably fast. The mount is secure enough for rough road riding.

The value and simplicity. Some lights seem slightly over-engineered.

It's a decent, solid light that works very well and is decent value.