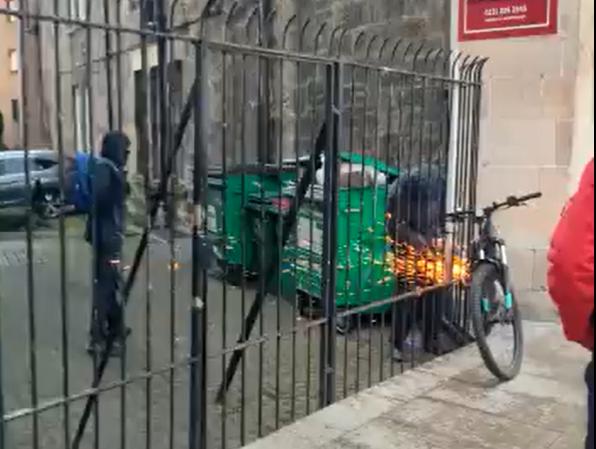 A pair of hooded bike thieves were thwarted while attempting to steal a nurse’s bike using an angle grinder on a busy street in Edinburgh.

A video, posted on Twitter yesterday, shows the two thieves trying to cut through a bike lock using the power tool, with sparks flying, in plain view of passers-by.

This is Leith walk in broad daylight. Unbelievable.
My colleague's bike saved by some passers-by's intervention. She left her bike for less than an hour. The passers-by guarded the bike until her return. Some awful people however some good people too. #Edinburgh #cycling pic.twitter.com/cnruREQYXI

The bike, which belongs to Cordelia, a nurse in the city, was chained to a metal fence on Edinburgh’s Leith Walk. The thieves were cutting through the lock from the opposite side of the railings on which the bike was located – presumably to later walk around and casually ‘unlock’ the bike before riding away with it.

However, the duo’s illicit actions were abruptly ended when two locals confronted them. While one of the thieves appeared willing to continue with his day’s activity – turning around to recommence using the angle grinder even as he was harangued by the passer-by – they eventually both scarpered.

According to Cordelia’s colleague, who posted the footage, the nurse had left the bike for less than an hour as she visited a nearby shop to get a manicure. The locals who caught the thieves guarded the bike until her return.

"It was pretty outrageous,” Cordelia said. “On Thursday afternoon I had locked my bike to the railing on Leith Walk at the opening of Orchardfield.

“I went in to get a manicure and when I went back to the bike, there were three people there with one of them on the phone to the police. I was very lucky they got there when they did.”

The extent of Cordelia’s luck was evident in a photo she shared after the incident, which showed how close the thieves got to cutting through the lock. 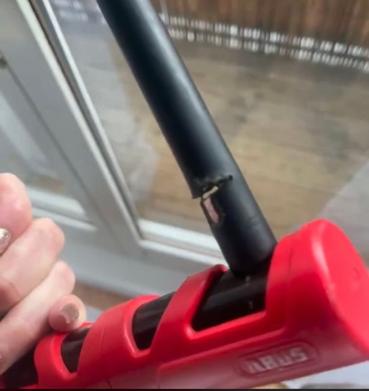 It is not the first time a gang of bike thieves using angle grinders has been caught on camera. In 2020, footage emerged on social media of a bike thief lunging a tool at a bystander who tried to intervene as the suspect cut the lock on a Brompton in Hackney, while last year a London cyclist confronted motorbike thieves using a similar tool to cut through locks.

In November, footage of a gang stealing an £3,000 e-bike outside a shopping centre in South London resulted in the victim receiving a “possible ID” for one of the suspects, who was known to the police.