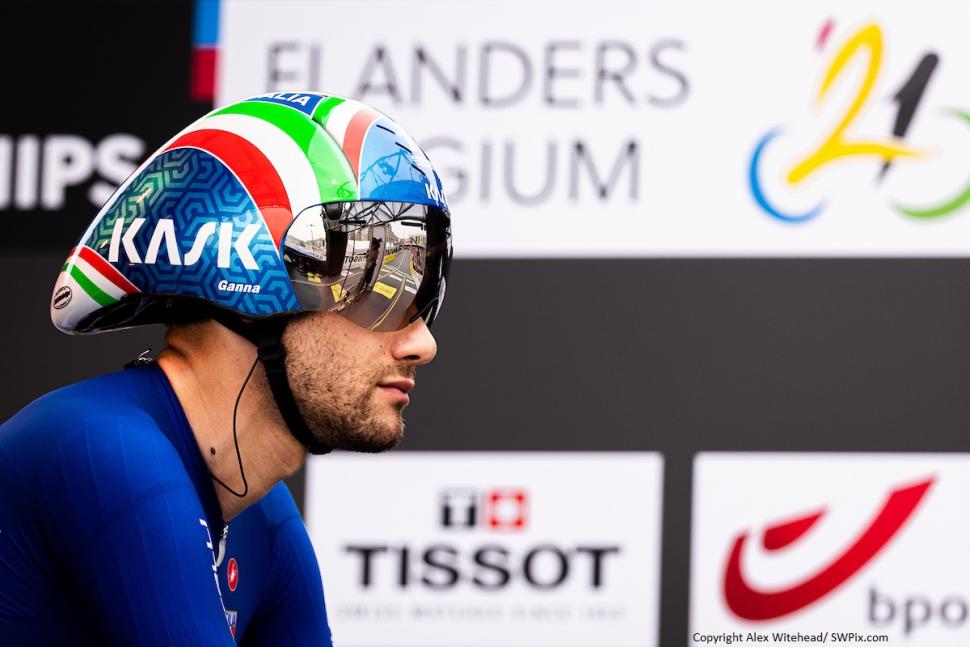 Filippo Ganna averaged nearly 55 kilometres an hour – the fastest ever average speed in the event's history – as he retained his world time trial title in Belgium today.

The Italian – who last month powered his country to team pursuit success at the Tokyo Olympics – was untouchable over the 43.3-kilometre course from Knokke-Heist to Bruges.

Fellow Belgian Remco Evenepoel took the bronze medal, 44 seconds down on the winner, while the top British finisher was Ethan Hayter in eighth place, a further 41 seconds back. It was also a strong time trial from Dan Bigham, the only other Brit in the race, who finished in 16th. An aerodynamics expert who worked for the Danish Olympic track team in Tokyo, Bigham isn't a full-time professional cyclist which makes his performance all the more impressive - you can listen to our interview with Dan on episode 5 of the road.cc Podcast where we discuss all things aero.

Ganna, who won his first rainbow jersey in the discipline at Imola 12 months ago, said: “I think in one week my condition improved after the short camp at altitude, then I did the European Championships but my legs didn’t feel very good and I didn’t know if I could arrive at the Worlds in good shape.

“When I woke up this morning, I had a good feeling in the legs and to defend this jersey for me is very important.

“It's a dream to win again and to defend this jersey.  I hope to honour it again for another year,” he added.