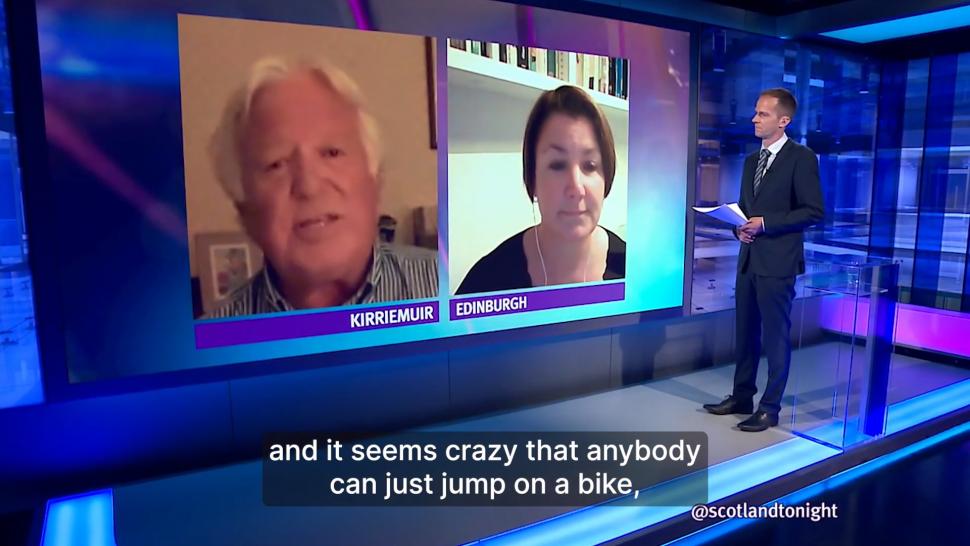 Yep, they're talking about those cycling licences (that the government said won't happen) again.....
by Dan Alexander

Groundhog Day (noun): A situation in which a series of unwelcome or tedious events appear to be recurring in exactly the same way.

Sorry, no idea how that got there. Anyway, they've been talking about cycling on the telly again this past week, and it seems certain sections of the UK print and broadcast media must have missed the government's pre-Christmas message that there are "no plans" to introduce legislation to require cyclists to wear identification and have a licence to use the roads.

Scotland Tonight, last week, aired a debate segment asking whether cycling should be regulated? While Channel 4's Steph's Packed Lunch (yes, the daytime show that once managed to attract literally not one single viewer) ran a Twitter poll asking: 'Should cycling on main roads be banned until you have a licence?'

This broadcast coverage was followed up by print articles in the The Press and Journal and regional news website CambridgeshireLive. In recent times we have seen the BBC's Countryfile, ITV, radio shows and most of (if not all) major UK newspapers set their sights on cycling as a topic for debate, call-ins and opinion pieces.

So what is it about cycling that means it keeps being dragged up by the nation's media for discussion? Here are some of your thoughts on the cycle licence 'debate' and the wider media coverage of all things bikes...

A few of you picked up on motoring journalist Alan Douglas' comment that cyclists are (apparently) "the only unregulated group of road users"...

Yanuf Yatar commented: "I think it's crazy that all these pedestrians can just walk about unlicenced."

IanMSpencer added: "While we are at it, isn't it shocking that pedestrians are also allowed outdoors without formal licence and training, Mr Douglas? Indeed, when there is no footpath, they have the right to walk in the road and motorists are treated like second-class citizens and obliged to give them room when the walkers could easily jump in the hawthorn out the way.

"Worse, these pedestrians know the law and sneakily take advantage of it at things like pedestrian crossings. So, to follow his line of argument, nobody is allowed out of their front door until they've got a licence."

Smoggysteve commented: "There is not a single western developed democracy which insists on cycling licences, insurance or a test to ride on their roads. So why so we allow the anti-cycling brigade continue to push for such nonsense?"

EM69 reckons they've got the answer: "The perfect topic to increase the ratings of a show dead on it's feet...well done Channel 4."

While Will Rogers reckons: "It seems cycling is a typical backup story for a slow news day."

Lastly, OnYerBike said: "It does always amaze me how many falsehoods can be delivered in such a short space of time." Before proceeding to deliver a mic drop moment...

"1) Most cyclists (this source says 80 per cent, but it's a decade old) hold driving licences.

2) As Diana says, not everyone is going to follow the rules, but it's rarely due to ignorance. Let's face it: no-one is unsure what the big red light means.

3) Cyclists can be prosecuted for road traffic offences. Prosecutions aren't especially common, but it does happen (see e.g. this article). In theory, you can even be disqualified from driving due to offences committed on a bicycle (source).

4) Having a licence is no guarantee that you will follow the law, or be punished if you fail to do so. See e.g. 80 per cent of drivers speeding; countless other examples of law breaking by drivers.

5) Plenty of other road users (e.g. pedestrians) are not required to have licences or insurance.

6) Cyclists can be held liable for damage they cause. Many cyclists will have third-party liability insurance through their home insurance policies, or specific cycling policies. Even without insurance, you can persue the cyclist personally for costs. Most cyclists could afford to cover the cost of repairing a scratch.

7) Being a legal requirement is no guarantee that drivers will actually have insurance. It is estimated that 1 million drivers do not have insurance.

8) Even if they have insurance, there is no guarantee that a driver will stop. Plenty of people (myself included) have experiences of cars being damaged whilst parked (presumably by other motor vehicles) and no details left."

So what do you think? Why are certain sections of the media so fascinated by cycling 'debates'? Let us know in the comments...