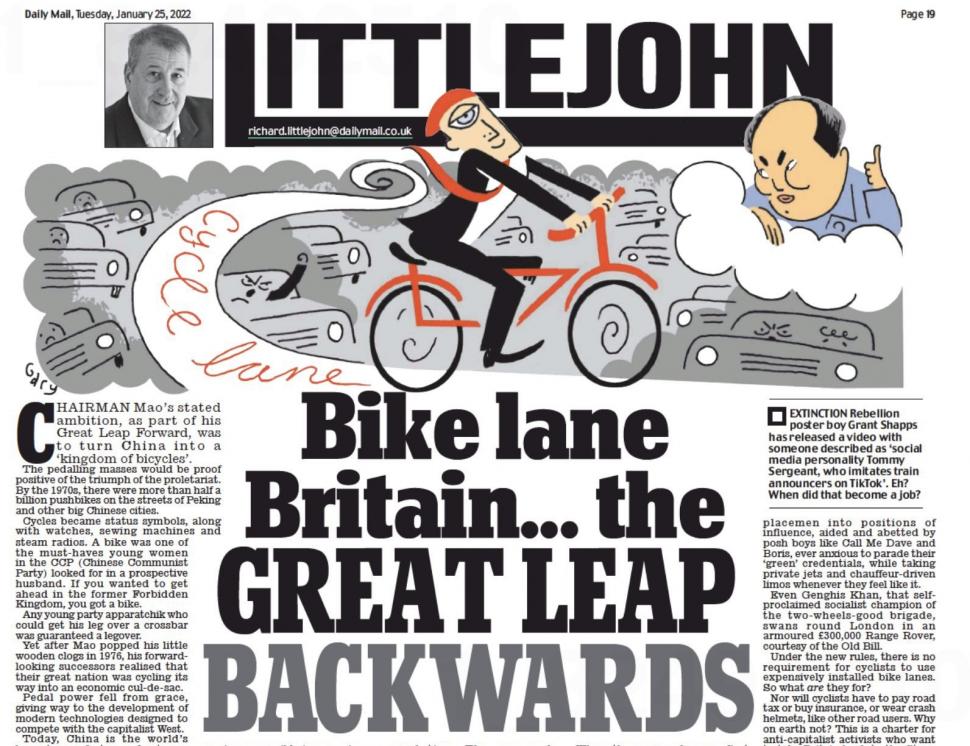 The Daily Mail and The Telegraph have today published opinion pieces slamming the incoming Highway Code changes, and launching outspoken attacks on cycling in Britain.

In which he blasts the "mutton-headed communists" and "Genghis [Sadiq] Khan" for supporting cycle infrastructure, while also ripping into cycle lanes built during the pandemic, "Lycra-clad lunatics", "suicide jockeys", two abreast riding, the new 'Hierarchy of Road Users' and the regularly mythbusted road tax.

> "If you're a competent driver it shouldn't cause any issues": Cyclists react to Highway Code change outrage

Commenting on the Highway Code changes coming into effect this week, he wrote: "Bikers are encouraged to ride two or three abreast in the middle of the road, deliberately to slow traffic to a crawl. Motorists will be expected to cede to both bikes and pedestrians when turning left."

The Code actually states riding two abreast "can be safer to do so", but that cyclists should "allow them [drivers] to overtake (for example, by moving into single file or stopping) when you feel it is safe to let them do so".

Walker also disputed the claim, amongst many, that "pro-bike extremists were given a blank sheet of paper to write their own rules."

Also: LittleJohn’s claim cyclists were “given a blank sheet of paper” to rewrite Highway Code notably echo comments of @IAMRoadSmart on radio yesterday. It’s not true, and such sentiments have probably helped make life on the road for me & loved ones a bit less safe this morning.

It is not the first time the Mail has been accused of misrepresenting Highway Code changes.

Last week, a MailOnline story told readers that one new rule "tells cyclists to pedal in the middle of the road" when in fact it provides advice about road positioning in certain situations such as on quiet roads or in slow-moving traffic, and riding in primary position has been encouraged by cycling instructors for decades.

The Telegraph too published a provocative opinion piece this morning, titled 'Pedal-pushers have taken over British roads – even as a cyclist, I think it’s time to rein them in'.

The introduction read, "The Highway Code’s new hierarchy of road use (sic) is taking things a bit too far in favour of the smug 'bikeltons' who manage to annoy everyone."

Last week, the Evening Standard was accused of running a misleading headline on a story titled, 'New Highway Code rule will fine drivers £1,000 for opening door with wrong hand'.

The Express went for 'POLL: Do you support new fine for opening car with wrong hand as cyclists given priority?'

Duncan Dollimore, head of campaigns at the national cycling charity, told road.cc: "A government led public awareness campaign should have started by now, with simple, accurate and memorable messages.

"Instead, less than a week before major Highway Code changes are being introduced, too many people are hearing about them through inaccurate news reports like this from the Evening Standard."