It's Wednesday and Dan Alexander will be picking out the best bits from the cycling world to take you through the middle of the week... 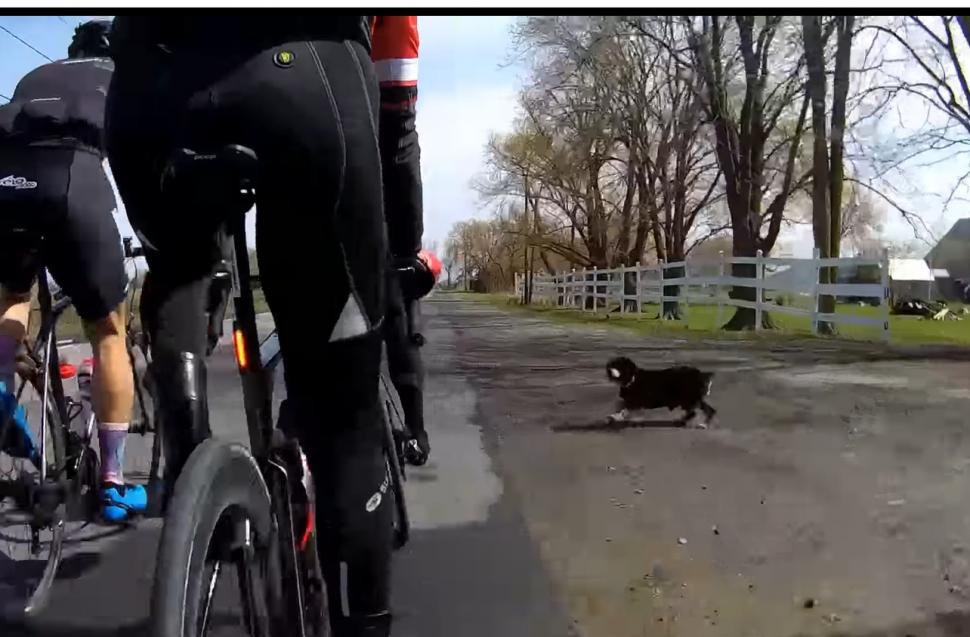 This video sent to us from Montreal left the cyclist with hip pain, mild concussion and a broken helmet. Thankfully nothing more serious considering the heavy fall at a decent speed. No mention of the dog apart from André's warning for other cyclists to watch out for the mad dog on Chemin de la Savane, so hopefully that means it was unharmed and will be kept away from the road in future...

Dogs being involved in cycling crashes is unfortunately a fairly common story in the road.cc archives. Just last month, actress Rebel Wilson posted a picture of her leg covered in ice packs with the caption “F*ck people who don’t have their dogs on the lead”.

And it is not just us amateurs who have to be careful...A crash at the 2016 Tour of Guatamala was caused by a pup running into the peloton...

21 April 2021, 16:17
Julian Alaphilippe and Primož Roglič have their say on the Mur de Huy battle royale 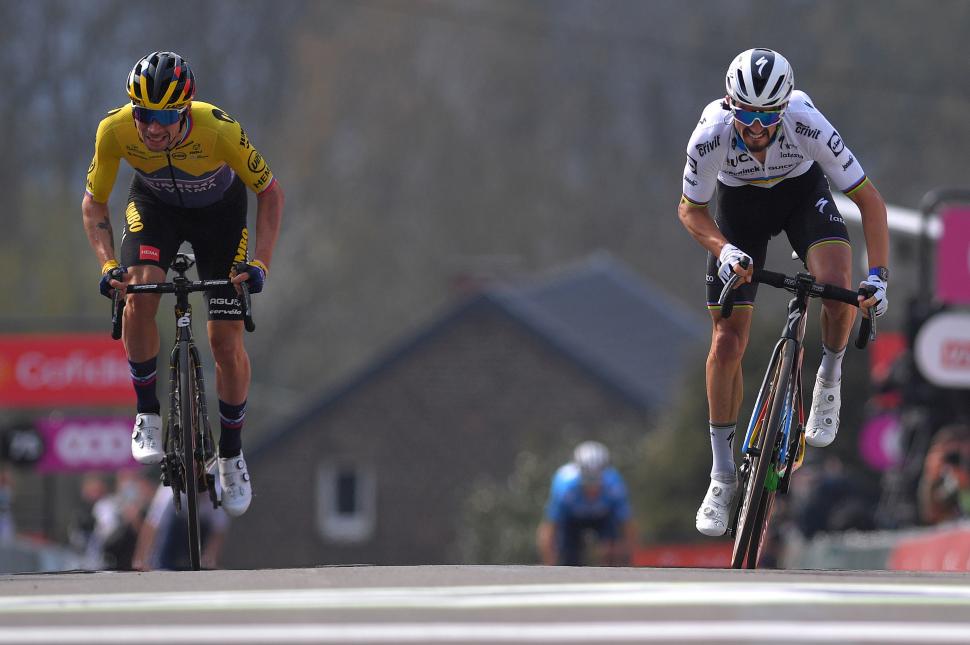 Julian Alaphilippe was understandably delighted at winning Flèche Wallonne. However, the world champion put his victory into context saying it meant a lot more to him as it is just his second of the season, a thin return by his astronomically high standards.

“I was very motivated and wanted to show today that I had a strong head," Alaphilippe explained. "So I gave everything when it mattered. Since the start of the season I haven’t won a lot and even though that didn’t stop me from having fun, I really wanted to raise my arms again. The fact that it happened at this great race, more than one month after my Tirreno win makes it even more beautiful." 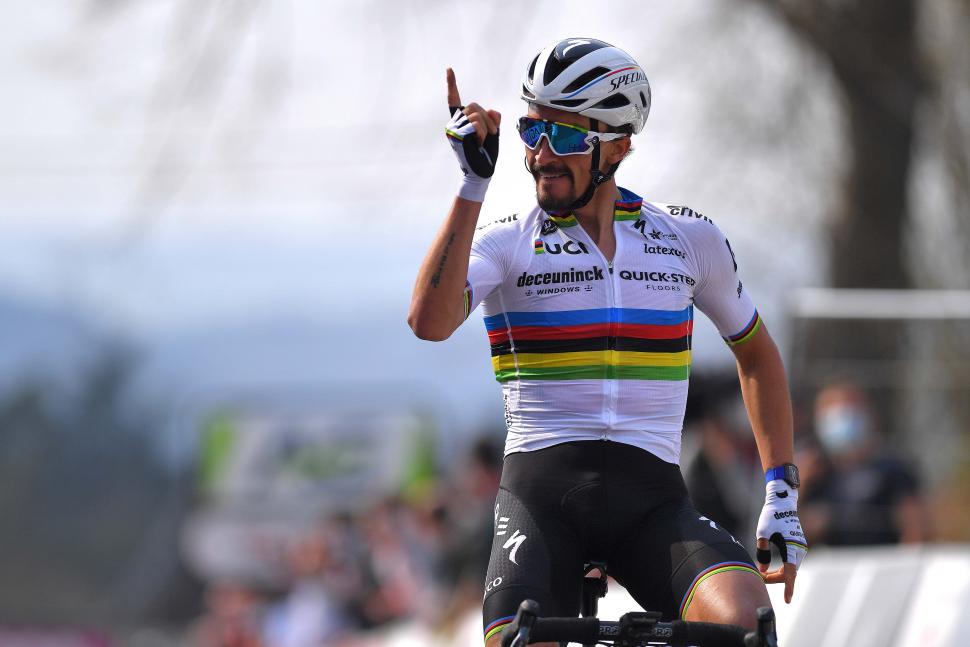 Primož Roglič had no regrets about his early attack on the final climb. I say early, the Slovenian jumped with 300m to go but was caught in the final 50m. "When you feel that the legs are good, you just have to attack," he explained. "Unfortunately, I got caught up just before the finish. That’s racing. Julian was the strongest rider on the climb. He deserved to win. The final climb is really difficult and tough, but it’s one that suits me. I was in a good position and went for it."

Roglič will get another shot at Alaphilippe this Sunday at Liège–Bastogne–Liège in a re-run of last year's iconic finish...

The signage of mad men... pic.twitter.com/r971YYRSVc

You might remember these no cycling signs from the live blog last week. Cllr Louis Stephen, leader of the Green Party in Worcester, unsuccessfuly argued against the public space protection order which was passed by a casting vote from the chair of the city council's communities committee. As a result, anyone who cycles dangerously can be fined £100.

Stephen called the signage "tacky" and "unwelcoming". "This is a very divisive topic," he told Worcester News. "When the subject came to committee the vote was split 50:50, I voted against and the measures only went through with the chair's casting vote. The bollard covers look tacky and I believe the messages are negative and unwelcoming to visitors and local residents."

Dan Brothwell of Bike Worcester added: "It is not very welcoming and that is an understatement. I think they are really unpleasant and pretty ugly as well. I understand the reasons for the PSPO being put in, I was consulted on that and I suggested it wasn’t a very good idea but I get that it is here and with us.

"The notion of dangerous cycling is not defined. There needs to be perspective with that. If you are walking you may think a cyclist is going too fast or close but from the perspective of the cyclist that may have been pretty reasonable.

"Having the signs up will probably cause conflict, they empower people to speak out and the global share with care message would be far more appropriate, to encourage everyone to get along next to each other and just get on with it. That would be reasonable, I don’t think this is." 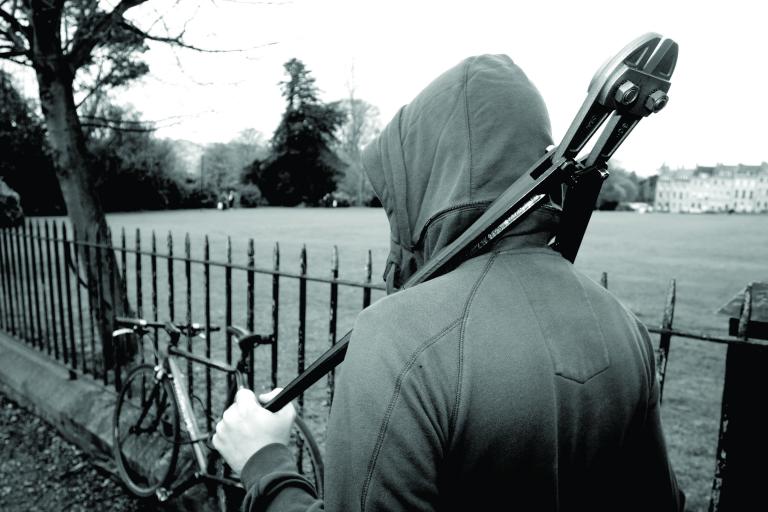 Theft victim gets his bike back... after spotting it on TV

Winning up the Mur de Huy is clearly a world champion thing. After Anna Van Der Bregen won the women's race this morning, Julian Alaphilippe took the men's race this afternoon to take their combined Flèche Wallonne tally to ten wins...The Frenchman danced up the steepest section to reel in Primož Roglič with 50m to go. Former world champ Alejandro Valverde was third, while Mike Woods will once again be wondering what could have been after surging to fourth with a late burst from the back of the group. Tom Pidcock recovered from his crash to take sixth.

Bad luck for Pidcock who is being paced back to the peloton by his team car. Philippe Gilbert was one of the other riders to hit the deck. It's the Lotto-Soudal rider's first race back since announcing his plan to retire at the end of next year. 25km to go. 24km until the third and final time up the Mur...

Josh Quigley is no stranger to epic feats of cycling record-breaking. In September he completed the 516-mile North Coast 500 route across the Scottish Highlands in 31 hours, beating the previous best by five minutes. However, we didn't expect to see him back at his mind-boggling best this soon after a serious crash in Dubai at the end of January left the cyclist with multiple fractures to his pelvis, shoulder, elbow and spine...

To beat the current record Josh will have to ride 2,177 miles. That's seven consecutive 311-mile days...Josh is aiming for 320 miles every day and has planned an 80-mile route in Aberdeenshire which he hopes to complete four times per day.

On top of the incredible physical challenge Josh has set a target of raising £10,000 for Arthritis Action.

Cheers Matt. Course is around 6-8,000feet of climbing each day depending which mapping software you use. But based on 18 hours of riding each day it’s relatively flat and no major climbs, just some small steady inclines and declines. Sleep maybe 3-4 hours at most. 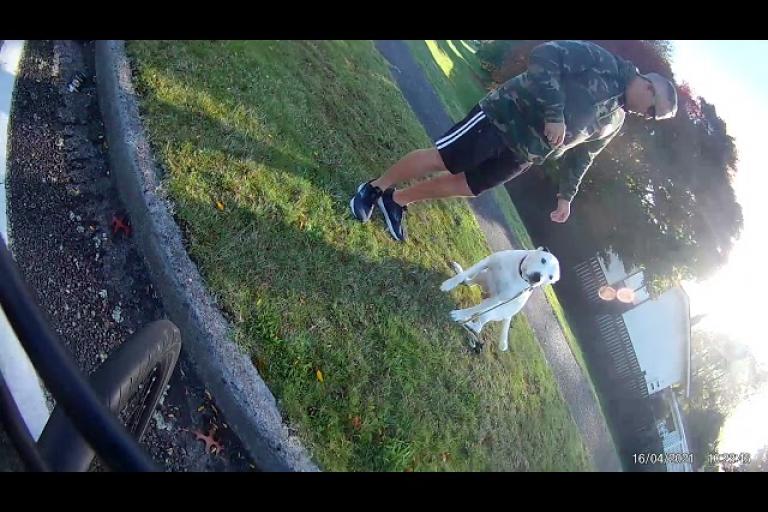 Video: Cyclist jumps out of way to avoid being crushed after lorry driver fails to see her

Jakob Fuglsang told Belgian newspaper Het Nieuwsblad he believes he wasted eight years of his career by eating too little. I can't say this has been a problem I've had...Comparing himself to the new generation of racers such as Tadej Pogačar and Remco Evenepoel, who are already competing and winning at the highest level early in their careers, the Dane explained how times have changed for young professionals.

"Young riders are better guided than when I was a neo pro," he said. "When I debuted, you had to earn a wind tunnel test. Only the best riders of the team were given a chance to do so. Every team also employs an army of dieticians. I had to learn that myself, through trial and error.

"I wasted eight years of my career eating too little. Nobody pointed this out to me, because that was something you as a rider had to discover for yourself. When a young rider eats too little for one day, that is corrected immediately."

Despite the envy of the resources available to today's young stars, the 36-year-old questioned how long they can maintain their incredible performance levels. "I am convinced that with today’s guidance I would have performed better much earlier. Although I sometimes have my doubts about the current approach. Training hardcore in December to be there immediately on the first day of racing. I am curious to see where those young guys will be in ten years’ time."

You have to go back to 2014 for the last time Anna Van Der Breggen did not win Flèche Wallonne. It was another victory for the world champion this morning on the steep slopes of the Mur de Huy. In form Polish rider Katarzyna Niewiadoma ran her close but Van der Breggen was just too strong as they came off the 20 per cent gradients.

In the men's race there is just over 100km to go for the field, excluding UAE Team Emirates who dropped out this morning following two positive Covid tests yesterday.

Some crackers coming up this morning for the rubbish cycling infrastructure folder...Maybe if we paint a bike on the road that will do? No, how about we paint two bikes facing each other...

At least those bikes were painted properly...

Na, you know it's first class when the (misshapen) bike symbol is before the lane starts, and the start of the lane says END.... pic.twitter.com/X50pALCkXs

UAE Team Emirates out of #FlecheWallonne 2021.

UAE Team Emirates has released an official statement confirming their withdrawl from the race due to Diego Ulissi and one staff member returning positive Covid tests yesterday. The team says both Ulissi and the staff member are vaccinated, returned two negative tests before travelling to Belgium and have since provided three negative tests.

"Though the team is frustrated by the ruling, we fully accept the final decision of the Belgian authorities," the statement said. "Since the original ‘positive’ test, both members have undergone 3 separate tests each: 2 antigen and 1 molecular. All the results from these subsequent tests returned negative results and neither displays any symptoms.

"The team will withdraw from the race and undergo further testing with the aim to start Liege-Bastogne-Liege on Sunday."

We all have negative and we don’t start Flèche Wallone.
We had false positive yesterday but came three times negative afterwards.

I'm sure we'll hear more about this throughout the day. Tadej Pogačar claims his UAE Team Emirates squad has been denied a start at Flèche Wallonne after what he called a "false positive"...

21 April 2021, 07:56
Have you climbed the Mur de Huy? Pros prepare to take on one of cycling's toughest climbs returns at Flèche Wallonne

Whenever you see a climb with the word 'mur' in its name you know it's going to be savage...The wall of Huy, to translate into English, is just that: a grind up 20 per cent gradients that never seems to end...

CANYON//SRAM went for a look at the climb yesterday, the punishing slopes make the pros look like us mere mortals just trying to get to the top...

Here's more of what is in store for the pros later today...

⛰ A last climb up the Mur de Huy, almost ready for the 5⃣ climbs of tomorrow. ✅#FWwomen #FlecheWallonne pic.twitter.com/LZZq93NVNa

If you've climbed the wall, get down in the comments and let us know if it is as hard as it looks on TV...