Dan Alexander is here for your Thursday dose of live blog action, taking you one step closer to the weekend 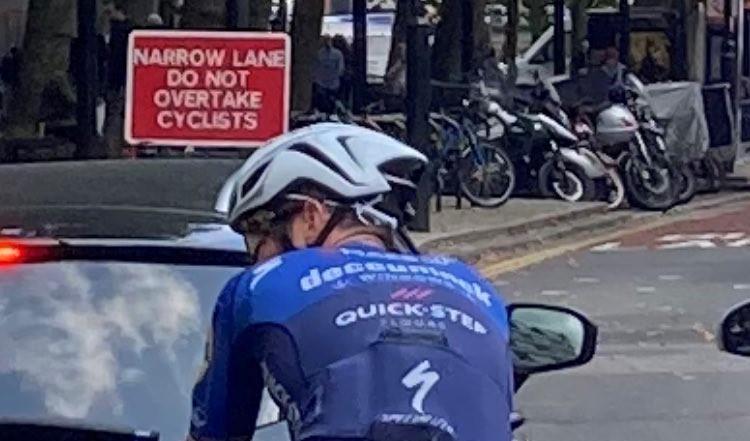 Mark Cavendish (Roy Badical/Twitter)
16 September 2021, 16:07
Cav reaction: Does he HAVE to wear Quick-Step kit to the shops? + Bumping into pro rider stories

Was that sign ‘Do not overtake cyclists’ put there specially for Cavendish?

Remember seeing a guy in full KAS gear on a club run. One of the guys said who does that w@nker think he is, Sean Kelly. We caught up, it was his team mate Martin Earley

The photo also raised the question of when is a pro contractually obliged to wear team kit? At a race? Obviously. Training? You'd think so. Pop to the shops? Taking the kid for a tricycle around the park? To be fair, if I got all that free gear, I don't think I'd ever be out of it...

wycombewheeler commented: "Love the idea that every time Cav (or any of the others) get on a bike they must be in team kit. Training ride - team kit. Return from dropping the car for a service - team kit. Pop to the supermarket - team kit. Think about using a london hire bike - better have team kit with you."

Rendell Harris added: "I wonder if when he pops to the supermarket he's only allowed to go to Lidl?"

We also had a few stories of readers bumping into (not literally, I hope) pro riders...

the little onion used to see the GB track stars often: "I used to regularly ride on the roads in south Manchester and Cheshire, and would often see the GB track riders out and about. Always friendly.  Though seeing Chris Hoy pull away from a traffic light was impressive, even if he was barely putting any effort into it. His thighs were bigger than my waist!" If you think his legs are big, wait until you see what that wasp did...

Kapelmuur said: "Same here, Geraint Thomas lived near me and I'd often see him out training. He always waved and said hello. The same went for the other Sky riders. It amused me that Olympic gold medallists and World Tour race winners always acknowledged me while many club hacks would ride by as though I was invisible."

PRSboy tried descending with the shark..."My only pro cyclist encounter was Team Astana headed up by Nibali when I was having a breather at the top of a climb in the Dolomites.  Tried to follow them down the other side of the pass, frankly I did not see which way they went and I am a man who prides myself on descending!"

16 September 2021, 15:01
Cyclist attacked by occupant of passing car in the Western Isles

About 4pm on Wednesday 15th September a cyclist on the main road at Newmarket, Stornoway, near Baker's Road, was assaulted by the occupant of a passing car. It is believed a number of passers-by may have witnessed this. If you have any info, please contact Stornoway Police. pic.twitter.com/d4QCk4E97G

The Press and Journal reports Western Isles Police are looking for witnesses to come forward after a cyclist was attacked by the occupant of a passing car in the Newmarket area of Stornoway. Police belive a number of other road users may have seen the assault at around 4pm on Wednesday and encouraged anyone with information to contact officers in Stornoway. 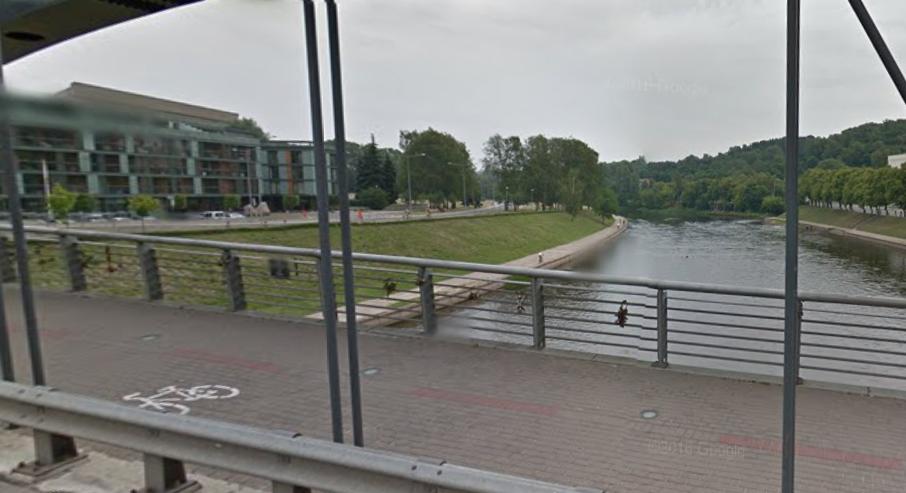 Forget Cabinet reshuffles for a second, Lithuania's government has voted through 'bicycle streets'. These will allow those on bikes to use the entire width of the road and limit other vehicles to 30km/h...

You may be wondering why that's so deserving of the 'bicycle street' tag? Transport Minister Marius Skuodis said it's so "cyclists don't have to keept to the side of the street, in other words, they are an equal to all other vehicles." I guess it's nice to have it in writing...

Some Lithuanian cyclists have said their towns and cities need to do more to become bike-friendly, and that segregated infrastructure would be more helpful than 'bicycle streets'. "Unless the surrounding infrastructure gives a sense that cyclists are safe here, then what’s the point? It only distorts the situation," head of the Lithuanian Cyclists Association Paulius Bakutis told BNN News.

Right, you can go back to smiling about Dominic Raab...

Sat on the roadside on a big tt session day having done 1 of 4 efforts, with a flat rear tyre and a spare tube with a valve not quite long enough. Waiting for my dad for an emergency call out.

After all these years, still deep down an amateur bike rider masquerading as a pro. pic.twitter.com/383aYe3G0I 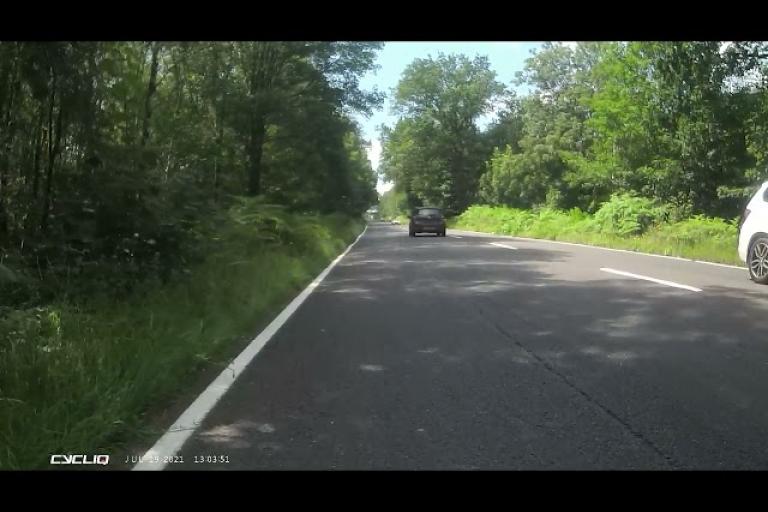 Near Miss of the Day 637: Cyclist receives a very fast and close pass 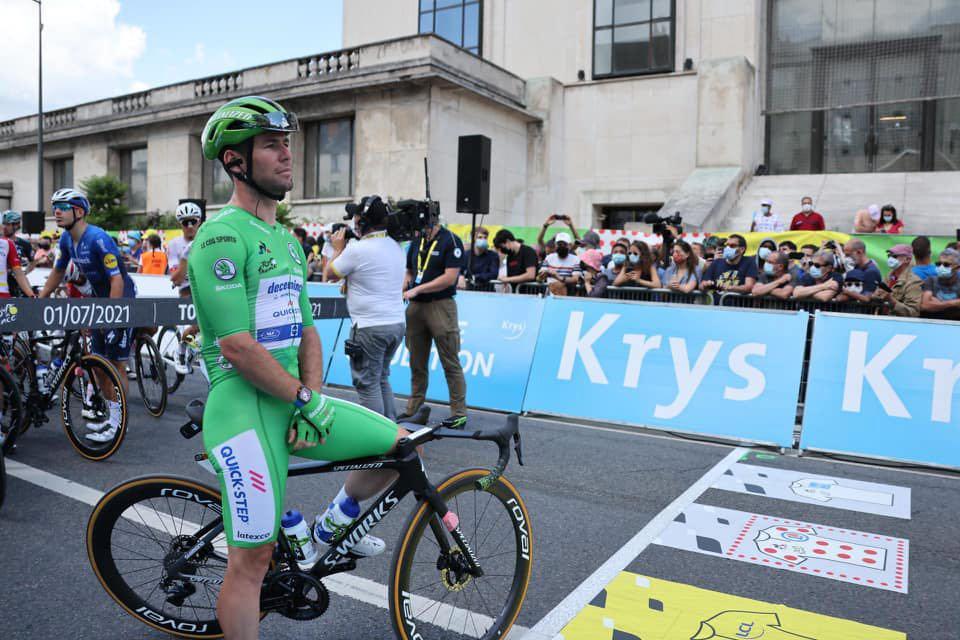 Last night Patrick Lefevere had something else to say about the Cav contract conundrum. Forgive the fairly shoddy translation, he tweeted: "Water too deep between Mark Cavendish and Deceuninck-Quick-Step? We're not talking about a bag of fries. How deep? 1cm or 25m? With a little good will, you always find a bridge."

Earlier in the week, the 36-year-old was offered a one-year extension with the Belgian team. That was before Lefevere popped up in the Belgian press saying Fabio Jakobsen is their man for the Tour de France next year and that Cav is looking to cash in on his success...

Meanwhile, the Manx Missile was pootling around London in full kit...

Josh Quigley should pass the halfway point of his challenge today...still looking strong.

16 September 2021, 10:34
"From now on, he will ride every race": Patrick Lefevere continues Sam Bennett feud, says sprinter will be selected for every race possible until the end of the season 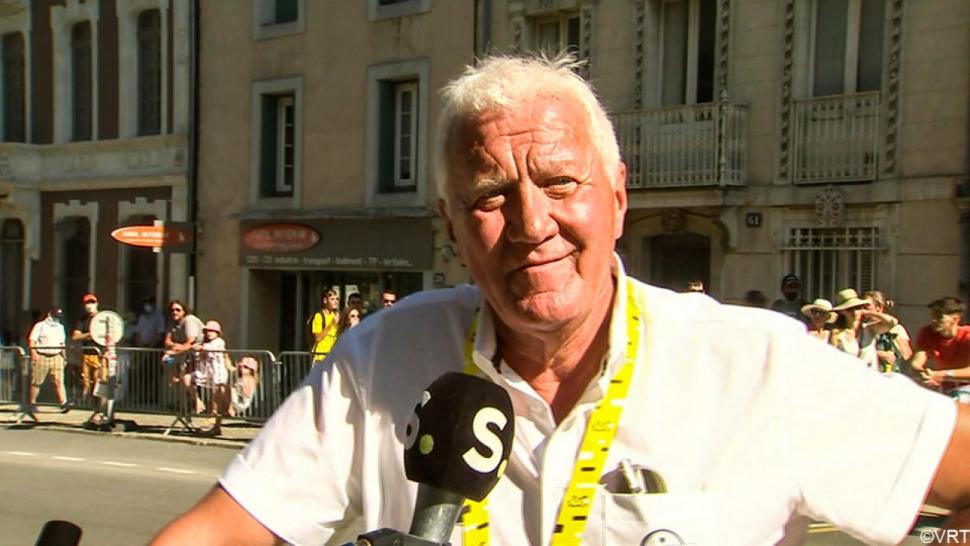 Sam Bennett avoided a hefty pay cut by riding for Ireland at the European Championships on Sunday. The race meant the Irishman hadn't gone three months without racing, meaning Patrick Lefevere was unable to slash his salary...1-0 Bennett.

The Deceuninck-Quick-Step boss isn't one to go quietly however, and hit back today by saying Bennett will "ride every race" the team can possibly get him to. Speaking to Het Nieuwsblad, Lefevere said: "From now on, he's going to drive every race we can set him up in. On Sunday he will also participate in Gooik, on Tuesday he will start in Vichte plus everything that comes afterwards. He himself wanted it that way.

Lefevere joked he's even sorry the end of season races in China are no longer on the calendar...it's the latest barb from the outspoken Belgian. Last week, he accused Bennett of "playing with my balls in public". Less amusingly, he also compared his rider's upcoming return to Bora-Hansgrohe to "women who return home after domestic abuse". Bennett has maintained a dignified silence since pulling out of the Tour de France with a knee injury that his boss said was a mental weakness, not a physical problem. 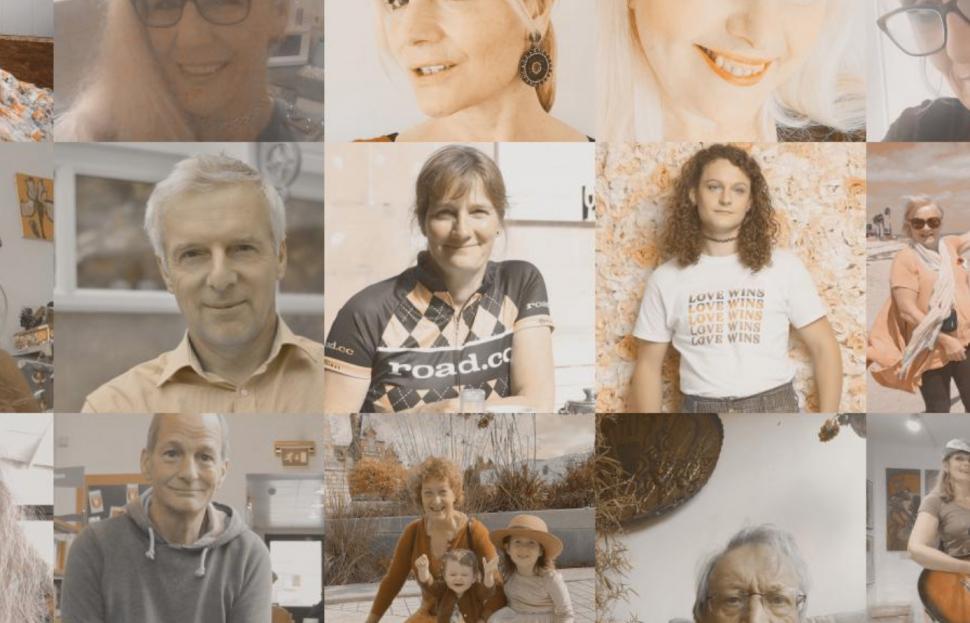 road.cc's Tass found herself on Greenpeace's 'Wall of Change', a celebration of the group's work over the past 50 years...and, of course, she's repping the road.cc kit. Does that make us famous?

You can add yourself to the wall over on Greenpeace's website...bonus points if you get us in there too... The British brand set out to create a Grand Tour winning lube that combines both speed and sustainability showing “being green can be fast". It will also cost you £49.99 for a 50ml bottle
12
16 September 2021, 09:38
Rudy Project marks Sonny Colbrelli's European Championships win with special edition Nytron helmet 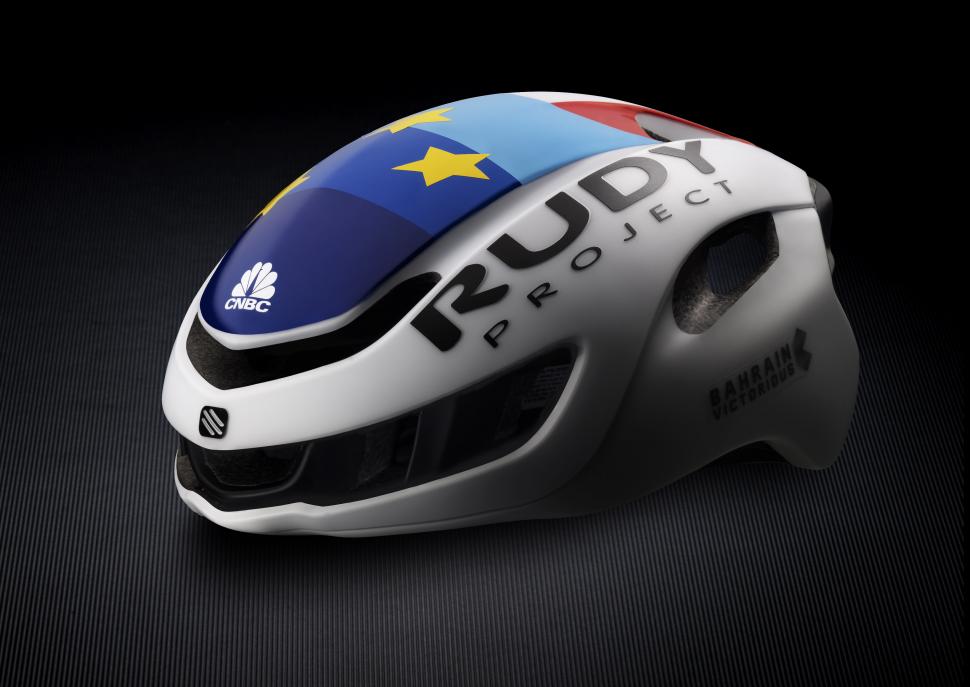 Sonny Colbrelli was rocking his new European champ's kit in Italy yesterday, including matching helmet and shades, thanks to Rudy Project. Bahrain Victorious' helmet supplier came up with this special edition design to celebrate its rider's win. The artwork has a nod to Colbrelli's Italian National Championship win too, with the tricolore on the rear. 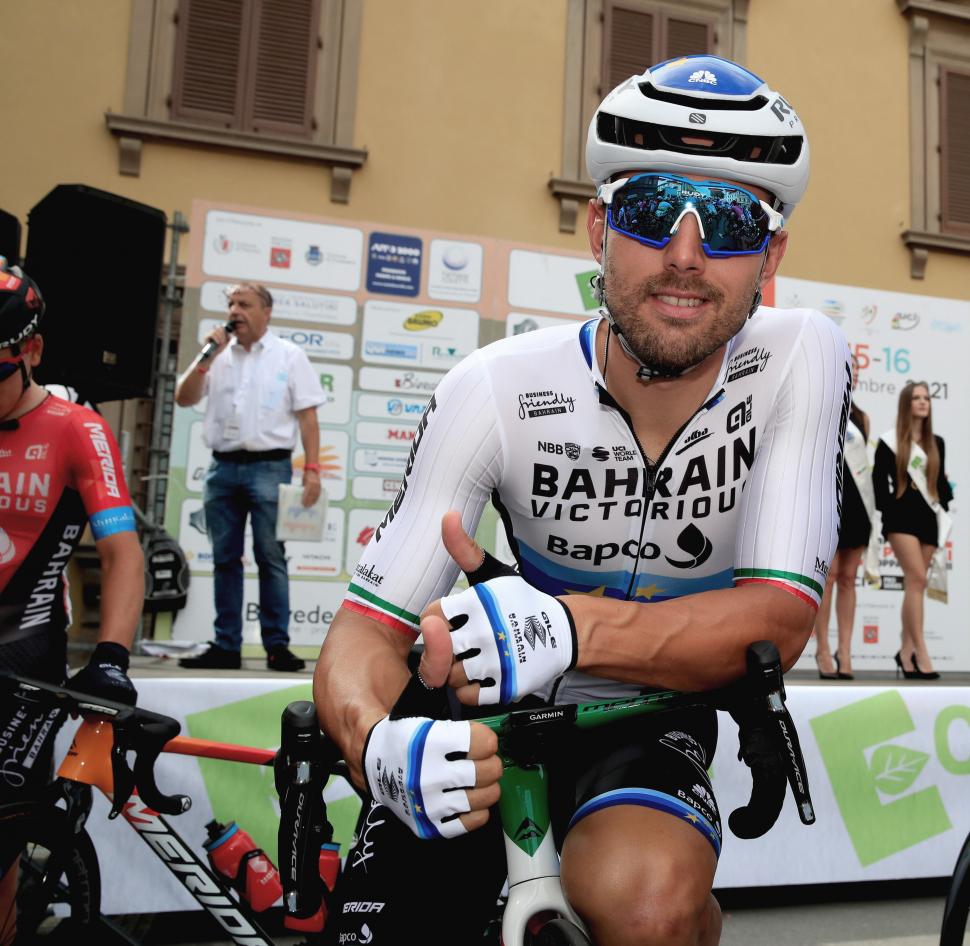 This is what you call Riding & Raving. pic.twitter.com/PurC4dc0PQ

Dom Whitting's nationwide Drum & Bass On The Bike tour attracted its biggest crowd yet...can't be long before someone shuts this down for having too much fun.

An Amsterdam vid would be top of our wishlist, and Dom said he's already looking to speak to the local critical mass to get out there. Keep your eyes peeled...

Phew. I do think Johnson is serious about kick-starting a cycling revolution across the country like he did in London and Shapps is onboard and key. Although I'd love them to move at light speed I suspect they're moving at a sensible pace as to quickly could backfire.

Thoughts? Happy to see Shapps stay? What should the priority be moving forward?

You may also run into Cav, casually weaving through traffic in full Quick Step regalia, which happened to me today. So there’s that! pic.twitter.com/a1c2n0NTyz

My favourite part of this is the sheer number of adults, myself included, genuinely disappointed not to have caught a glimpse of their hero. Anyone see Cav in London, yesterday?

Roy Badical did, and snapped this quick picture before Cav presumably used the slipstream ahead and danced off into the distance...

Roy said: "He was his agile self but stopped at all the lights! I did have a very fun twenty seconds pretending he was my lead out man though. Only had time for a little chat with him while the light was red. Also completely coincidentally did get his autograph last weekend at the Tour of Britain!"

Someone show Eddie Marsan this strange photo of one of our most famous cycling faces, waiting at a red light...

Cycling is bonkers. Just Mark Cavendish out for a ride, for whatever reason, in London. Contractually obliged to wear full team kit. Because, cycling. https://t.co/DsbAClxqyo