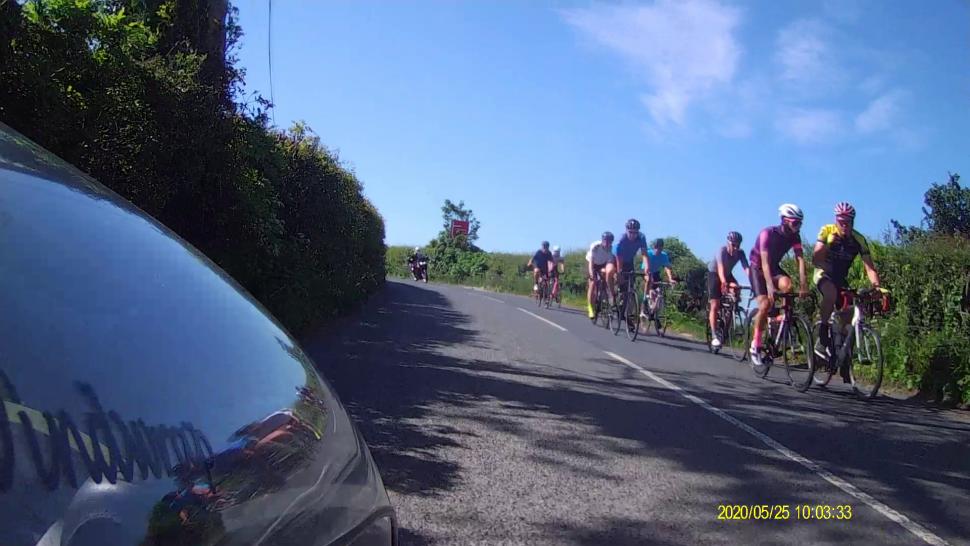 How lockdown restrictions should be interpreted has dominated the headlines over the weekend, but leaving aside whether you should be taking a 60-mile round trip in a car to test your eyesight (no, you shouldn't), rules on exercise clearly forbid group rides – something these cyclists photographed in Lancashire seem to be ignoring.

The picture was taken by road.cc reader Matt Hodges, who also happens to be one of Cycling UK’s longest-standing Right to Ride volunteer campaigners. He said that the sight of groups of cyclists such as this one is “getting us all a bad name.”

He encountered the group on A588 between Cockerham and Thurnham about a mile north of Cockerham.

“It is good to see so many cyclists on our roads especially families,” he said.

“But it is not good to see groups like this getting is all a bad name by totally ignoring the guidelines on social distancing.

“Can you not see that this sort of behaviour gives motorists the justification they want to condemn ALL Cyclists as selfish idiots who shouldn’t be allowed on the roads because they break all the rules?”

Matt continued: “I don’t recognise any of them. I don’t think they are one of the Lancaster clubs as they would be unlikely to be returning to Lancaster so early, also they usually have several members in club jerseys.”

In England, the emergency regulations currently state that “no person may leave or be outside of the place where they are living without reasonable excuse,” with one of those being:

with one or more members of their household, or

with one member of another household.

So, a bike ride with your family, if they live with you, is fine, as is going out and meeting a friend to ride as a pair. Riding in a group of eight, though? That’s not allowed.

Moreover, even if you find yourself on the road with other cyclists, you need to keep much further behind them than the standard 2 metres recommended social distance.

While the pair of cyclists at the rear are a little further back, we'll take Matt's word that they were part of the same group, given his years of experience within Cycling UK, and the point remains that even if you are maintaining social distance, you should not be out with more than one person who is not in your household.

> How much distance should you leave to the cyclist ahead?

We’ve reported a number of times during lockdown on how some images in the press taken with telephoto lenses appear to show cyclists riding in a group when, in fact, there is distance between them and they are riding alone or in pairs.

One of the most striking examples of that was a photo published in The Times of people riding bikes on the popular Box Hill climb in Surrey, with a picture taken from one of the riders’ perspectives at the very same moment underlining how misleading the press picture was.

That’s not the case here, however, and unfortunately it’s not the first time we’ve heard of actual groups out on the road ignoring social distancing rules – sometimes in club kit.

Some might disagree with Matt’s assertion that the sight of such groups gives all people who ride bikes “a bad name,” but you only have to look at the comments beneath pretty much any local newspaper story on cycling to see the stereotyping that goes on.

That, plus a large section of the press that is actively hostile towards cyclists – including giving a platform to columnists for example talking about stringing piano wire across the road – in turn gives rise to acts of aggression against bike riders, whether from motorists, or people spreading tacks on the road or setting other traps.

In its latest COVID-19 advice, meanwhile, British Cycling highlights that cycling outdoors could even be banned should people not do so responsibly – and that includes avoiding riding in groups. The governing body says:

While the restrictions on cycling outdoors will be eased from Wednesday 13 May, the Government had made clear that this is contingent upon people continuing to act responsibly.

The infection rate will increase if people begin to break these rules and, for example, start to meet up and ride in groups. This will also trigger the need for further restrictions.

By riding responsibly and following the guidance, you’ll be securing our right to ride outdoors, protecting the NHS and saving lives.