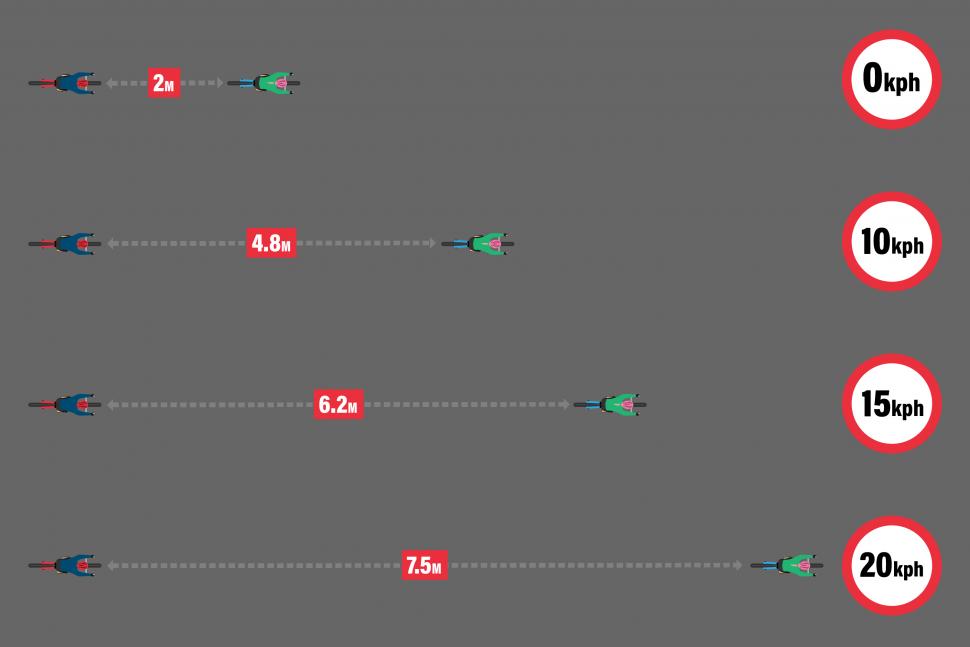 How much distance should you leave to the cyclist ahead in a time of pandemic?

It's a lot more than the 2 metres when you are off the bike - we explain why...
by Mat Brett

If you're still riding your bike outside, either for transport or for exercise, you need to stick to the Government's rules on social distancing, and also bear in mind that you're going to enter other people's airspace – where there's the potential for picking up COVID-19, or coronavirus – much quicker than if you were walking.

(NB – Since we published this piece, engineers and aerodynamicists at leading universities in Belgium and the Netherlands have published a rather more academically rigorous examination of how much space you should leave - find out more here).

As we all know by now, the UK Government requires us to stay at home, except for very limited purposes.

You should only leave the house for one of four reasons:

• Shopping for basic necessities, for example food and medicine, which must be as infrequent as possible.

• One form of exercise a day, for example a run, walk, or cycle – alone or with members of your household.

• Any medical need, or to provide care or to help a vulnerable person.

• Travelling to and from work, but only where this absolutely cannot be done from home.

Any of those could involve cycling. You might need to cycle for transport to essential work, to the supermarket, or to help a vulnerable person. You might also decide to go for a bike ride as your daily exercise.

Many cyclists are passing up the opportunity to go out on the bike, choosing to stay indoors and ride the turbo trainer or rollers instead, or to do some form of cross training – a weights session, for example, or a treadmill run.

Others don't have any of those options, or prefer to cycle outside.

"Even when doing these activities, you should be minimising time spent outside of the home and ensuring you are two metres apart from anyone outside of your household," says Government guidance.

For most of us that means riding solo. Cool, that's simple enough and we all know what two metres looks like.

However, things get a bit more complicated when you're on a bike and moving forward at speed.

According to the World Health Organization, "The disease can spread from person to person through small droplets from the nose or mouth which are spread when a person with COVID-19 coughs or exhales. These droplets land on objects and surfaces around the person. Other people then catch COVID-19 by touching these objects or surfaces, then touching their eyes, nose or mouth. People can also catch COVID-19 if they breathe in droplets from a person with COVID-19 who coughs out or exhales droplets."

We're assuming that you're not going to touch much besides your bike when out on a solo ride so it's this last section that's most relevant to cyclists – breathing in droplets from a person with COVID-19.

The issue is that if you're out on the road and riding fairly close behind another cyclist, you'll quickly arrive in the airspace that they've just vacated. Even if you're more than two metres behind them, you could be in that exclusion zone just a fraction of a second later.

> Here's how to cycle responsibly in a time of pandemic

Say you're travelling at 10km/h (6mph). That's 2.8 metres per second, so if you want to stay outside the two metre zone of where the rider ahead was a second ago, you need to drop back to around 4.8 metres.

Even at that distance, you're going to be at exactly the same point in the road as the rider ahead just 1.3 seconds later.

One quick final illustration: if you ride right up to the edge of another cyclist's two metre bubble at 30km/h (19mph), you're going to be passing through air they left just 0.24 seconds ago.

No one here at road.cc is a virologist, but logic would suggest that's not good!

Anyone who has caught a faceful of snot when the rider ahead decides to clear their sinuses will attest to that.

Speaking of this, snot rockets should definitely be off the agenda in these times of crisis. Even if you have no Covid-19 symptoms, you could be a carrier. You're just going to have to carry a hanky, sneeze into your sleeve or something! We all have to make sacrifices!

Spitting? Forget that too. You're not a footballer!

And if you're going to overtake a rider ahead of you, make sure there's no motor vehicle coming up behind, move out early, pass them with as much space as possible and at least two metres,and don't pull back in sharply.

So the take home messages are these:

• Leave way more than two metres between you and any rider ahead.

• Pass any other rider as wide as is safely possible, and avoid cutting in.

• No snot rockets and no spitting.

Credit to road.cc reader Richard Sturt for pointing out the implications of two metres of social distancing when cycling.