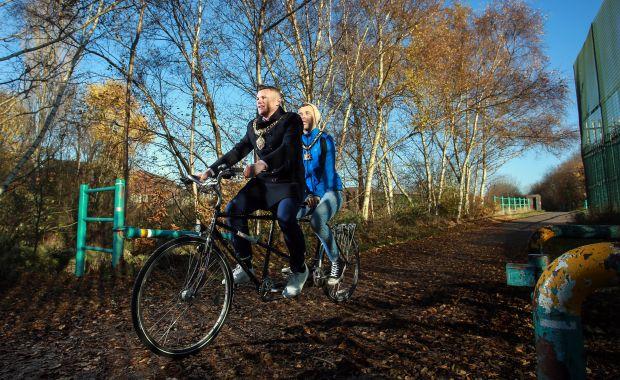 The Lord Mayor of Manchester Carl Austin-Behan and his Consort Simon Austin-Behan rode a tandem along Sustrans’ Fallowfield Loop cycle and walking route this week to highlight the new open barriers along one of Greater Manchester’s most popular traffic-free paths.

Tandems, bicycles adapted for disability and family trailers can now access the six-mile linear park, which had regular barriers along its length as well as at access points to roads, to deter use by motorised vehicles. While ordinary bicycles could stop and pass, larger non-motorised bikes were unable to pass through.

Sustrans worked with the Friends of the Fallowfield Loop throughout the summer on a trial removal of barriers along the path, which runs from Chorlton to Gorton. A survey of 300 people by the Friends found that the barrier removal was overwhelmingly positive, with little noticeable difference on motorcycle use.

Sustrans will now increase its lobbying efforts to secure the removal of anti-motorbike barriers from across the National Cycle Network.

The Lord Mayor said: “It’s great that people now have a more flexible and safe way to travel around Manchester on a traffic-free path, without hurdles. Removing the barriers makes it much easier for all types of bicycles, especially family trailers, to use the Loop and it’s put the joy back in to cycling this route as you don’t have to stop all the time. As word gets out that more people can now access the path, it will be a busier and safer place to be.”

The Fallowfield Loop was the former Manchester Central railway line, which was converted to a cycle and walking route in the 1990s. Guidelines at the time stipulated regular barriers to deter motor cycles.

A recent report by the Friends of the Fallowfield Loop surveyed of over 300 people, including face-to-face interviews on the Fallowfield Loop and online feedback. Of the responses, 279 were positive about the lack of barriers along the path, while 41 were negative, and a further 19 were uncertain or positive (but with reservations).

Sustrans and the Friends of the Fallowfield Loop will continue to keep the barriers open and work with the local community to monitor the path.