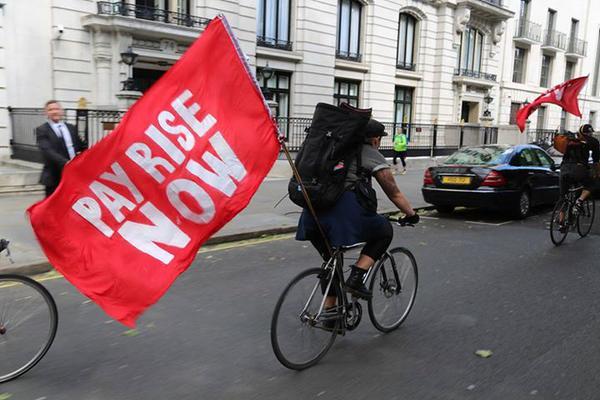 Cycle couriers staged a protest yesterday outside the offices of City Sprint, ITV and ITN demanding the Living Wage.

Organised by the Independent Workers of Great Britain (IWGB) the protest,  which met at 8am in the West End yesterday, called for the company to increase pay for its couriers, which the IWGB says has not risen for 15 years and can be as little as £2 per delivery.

Carrying banners saying "We dodge death to meet your deadlines" and "Higher rates now" protesters staged the latest in a series of protests against the employer since May.

Maggie Dewhurst, chair of the Courier and Logistics Branch of the IWGB, said: “We continue to target CitySprint and their clients, as they are complicit in the suppression of couriers’ wages – both at CitySprint and across the capital.

“Companies who carry the ethical badge of Living Wage accreditation should be making sure that the couriers who do their deliveries are fairly paid.”

Couriers are demanding a minimum £11.20 per hour pay from companies including ITV and City Sprint, who identify themselves as living wage employers.

The IWGB says City Sprint hasn't increased rates paid to couriers for 15 years, and argues couriers need the London living wage as they don't get sick or maternity pay, holiday pay or a pension and have to cover their own costs such as bike maintenance.

Earlier this month courier company Gophr signed an agreement with the IWGB for a "real living wage" of £9.15 per hour plus costs.

However, despite a series of protests by the IWGB City Sprint, the union says, "refuses to pay more than poverty wages".

“CitySprint can confirm that it has been subject to a campaign by IWGB, a union organisation that is not affiliated with the TUC, isn’t officially recognised within its organisation and appears to represent a very small number of its couriers if any.

CitySprint considers that the IWGB campaign is unfounded and misdirected and refutes the allegations made by the IWGB.

Pushbike couriers enjoy a highly flexible working arrangement and, like other self-employed people (such as taxi drivers), are paid according to the number of deliveries they do. This is the same across the wider courier industry and allows people to choose the number of hours and days that they want to work each week.

CitySprint’s analysis showed that the average pushbike courier earnings over the past three years have increased by ~13%, well above the national average.

CitySprint is proud of its fleet and offer them the opportunity to make amongst the highest earnings in the industry. The fact that over 25% of CitySprint pushbike couriers have worked with the company for more than five years is testament to the positive relationship it has with its couriers.

CitySprint believes a fair payment programme is critical to ensuring the calibre of its couriers and the quality and service standards in which it takes pride.”