Stage 14 of the Giro d’Italia is 59.4km (37.1 miles) individual time trial from Treviso to Valdobbiadene, and here are many of the bikes the riders will be using.

This is the only individual time trial in this year’s Giro although the race opened with a 17.6km (11 miles) team time trial from San Lorenzo al Mare to Sanremo, won by Orica GreenEdge. That gave us the chance to photograph some of the bikes. Many of the riding shots were taken just after the finish line, by the way, hence the non-aero positions. 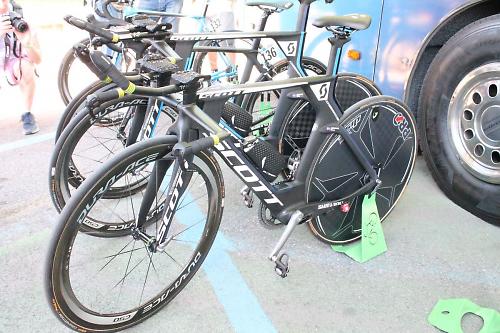 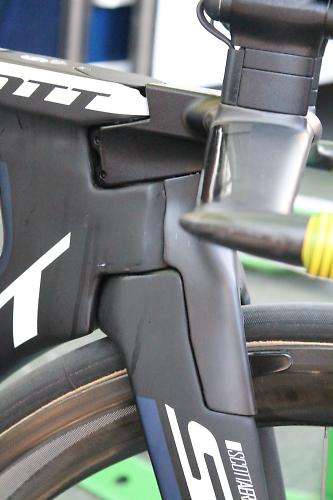 The head tube is very short and the fork crown is integrated into the frame so it doesn’t increase the size of the bike’s frontal area. The same is true of the stem and the front brake is shielded out of the airflow. 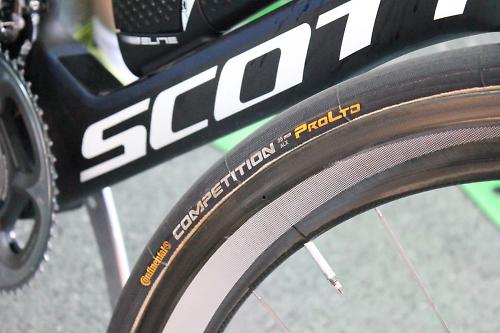 They use 25mm tubulars from Continental on their Shimano Dura-Ace/Pro wheels. 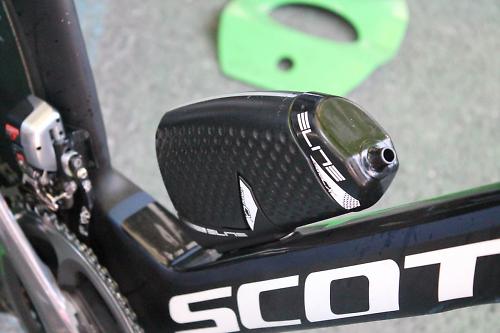 Orica GreenEdge were one of very few teams to use bottles on their bikes. Their winning time was 19:26mins so it’s unlikely that the riders needed to hydrate while racing. Maybe the bottle is there for aerodynamic reasons. 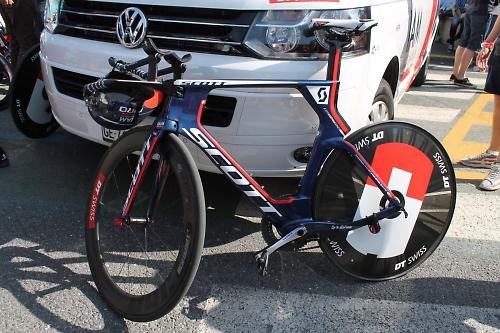 Switzerland’s IAM Cycling use Scott Plasmas too, a version of which team member Matthias Brändle rode for his Hour Record last year. On the road version, the rear brake is hidden underneath the bottom bracket while the front brake is integrated into the fork. 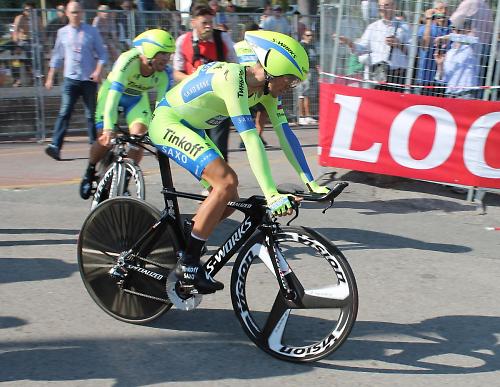 This looks like Tinkoff Saxo’s team leader Alberto Contador on his Specialized Shiv time trial bike. That’s a Vision Metron 3-spoke front wheel. Vision make a Metron Disc rear wheel but that doesn’t look like one on the back of Bertie’s bike. That appears to be a Lightweight Autobahn. 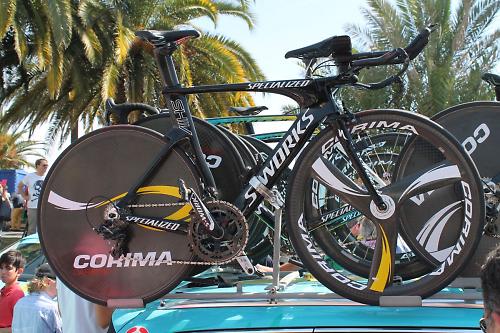 Astana ride Shivs too, although they use Campagnolo groupsets rather than Shimano, and Corima wheels. Disc wheels at the back were the order of the day over the flat course in calm conditions. 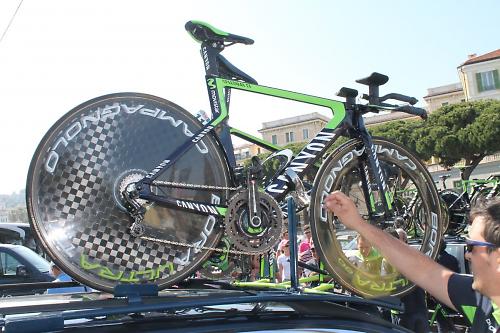 Movistar ride the Canyon Speedmax CF frame with a super-short head tube and a stem that sits flush with the top tube. The team is sponsored by Campagnolo, this bike fitted with a Bora Ultra 80 deep-section front wheel and a Bora Ultra TT disc wheel at the back. 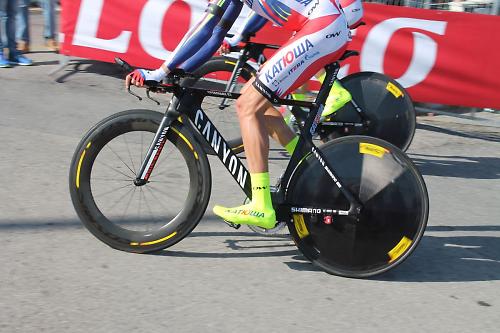 Katusha use the Canyon Speedmax CF too, but with Shimano groupsets and Mavic wheels. 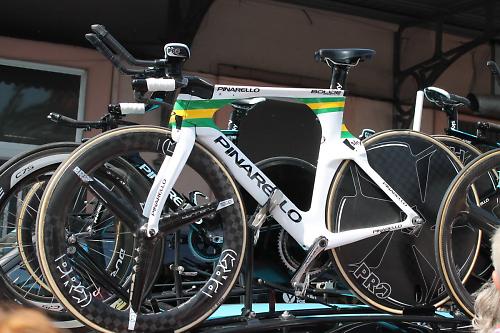 Team Sky ride Pinarello Bolides and this one belongs to Richie Porte, the green and gold stripes in recognition of his status as Australian national time trial champion. The base bar and brake levers that incorporate Di2 shifters are made by Pinarello. That saddle is a Fizik Tritone, noseless to allow the rider to lean forward comfortably. 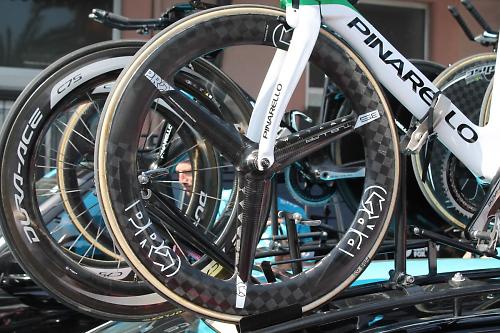 That Pro 3-spoke front wheel on the front of Porte’s bike was developed with help from Team Sky and first saw action at last year’s Vuelta a Espana. The carbon-fibre rim is 65mm deep and the hub is Shimano Dura-Ace 9000.

Sky don’t have a tyre sponsor. They often use Veloflex but these Pro wheels are fitted with 23mm tyres from FMB. 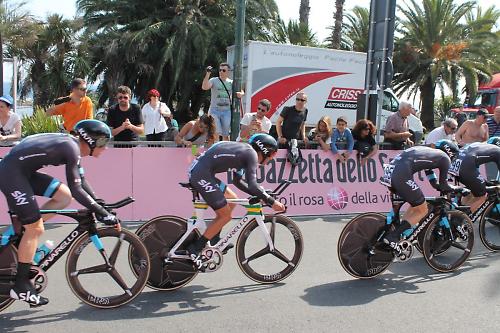 All the Team Sky riders were wearing Kask Bambino Pro helmets during the team time trial. 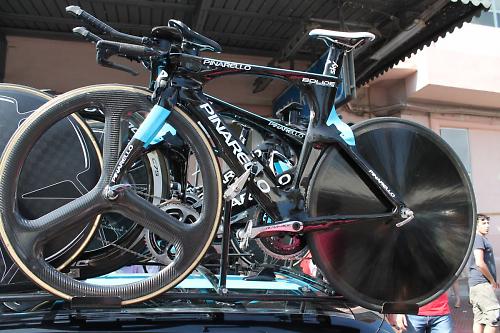 The front wheel on the bike of Stage Two winner Elia Viviani doesn’t look like it’s from sponsor Pro, hence the lack of logos. It appears to be a Hed wheel. 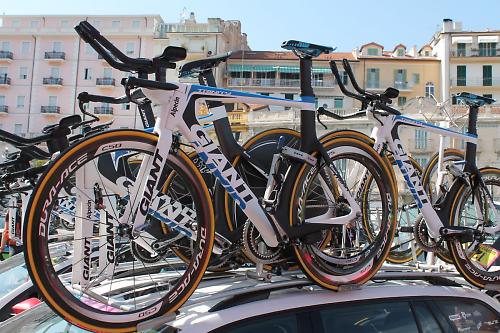 Team Giant-Alpecin use Giant Trinity Advanced SL bikes with the front brake shielded from the airflow at the back of the fork. Unlike on most bikes these days, the battery for the Shimano Di2 electronic shifting is positioned externally, attached to the underside of the chainstay. 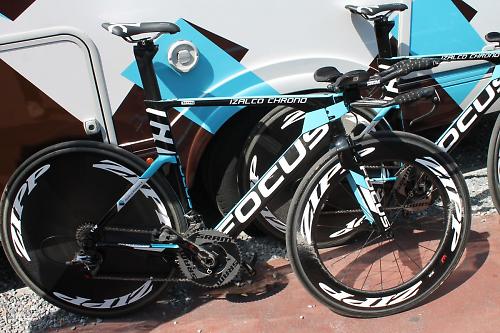 This is the Focus Izalco Chrono Max belonging to AG2R-La Mondiale’s Julien Bérard. The bike is fitted with a SRAM Red groupset although the integrated brakes are made by TRP. AG2R team riders are trialling SRAM’s new wireless shift system at the moment but Bérard’s bike uses standard mechanical shifting. 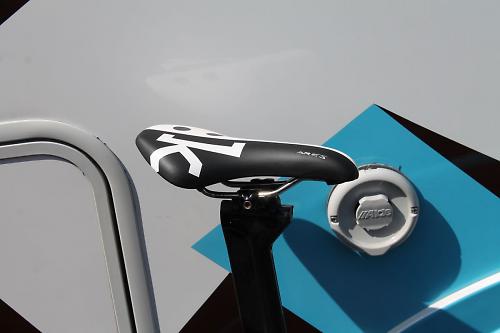 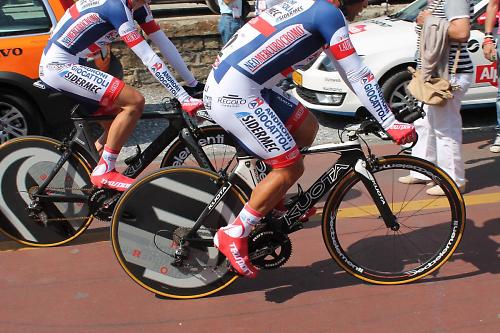 Italy’s Androni-Sidermec got a wild card entry to the Giro. The team time trial aboard Kuota Kalibur bikes.

Some riders, like Davide Appollonio, use Kaliburs with the front brake positioned at the front of the fork and a stem that sits above the head tube, attached to the fork via a conventional steerer. 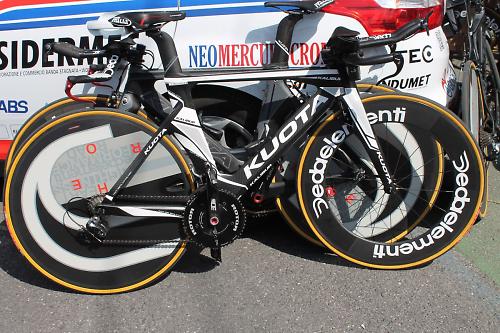 Other riders, like Franco Pellizotti, have the aero version of the Kalibur with the brakes tucked away. The wheels are from Deda Elementi and the tyres are Vittorias. 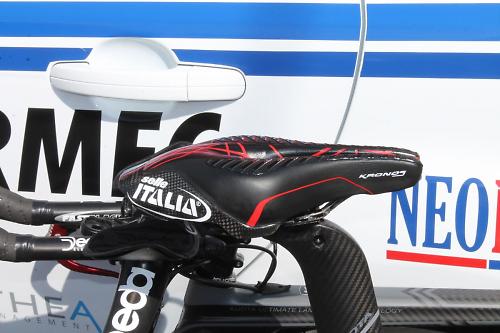 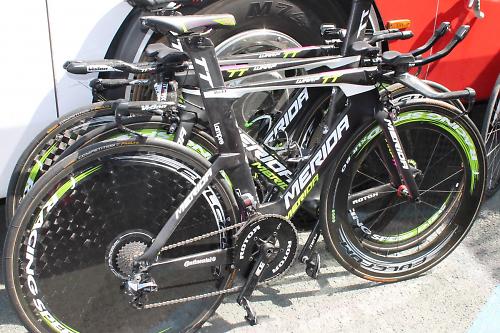 The Lampre-Merida team ride the Merida Warp TT bike. They use Shimano Dura-Ace Di2 groupsets but with Rotor 3D chainsets. It’s up to the individual riders whether they use Rotor’s non-round Q-Rings or their NoQ round chainrings. 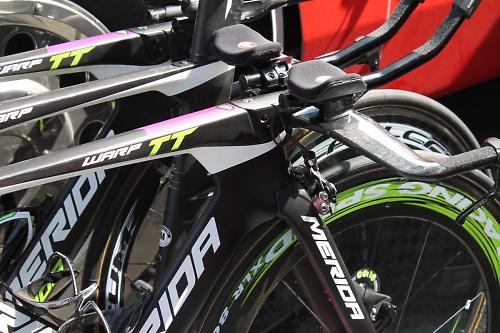 Merida put the front brake in the conventional position because they believe that the advantage of putting it behind the fork is so marginal that it’s not worth it. 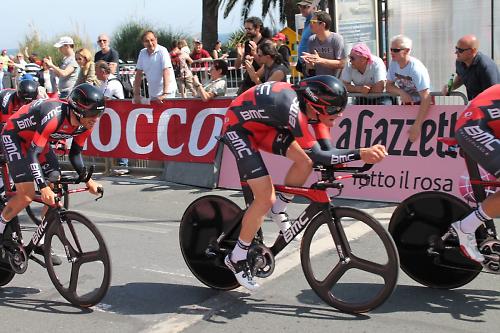 You can’t see the bike particularly well in this shot but BMC Racing Team ride BMC TimeMachine TM01s. The bike has a front brake that’s integrated into the front of the fork, and at the back the seatstays join the seat tube very low to reduce the bike’s frontal area.

Many teams rode the TTT wearing shoe covers for improved aerodynamics, but BMC chose not to. Pearl Izumi provide BMC’s clothing but not their shoes; the three riders here are wearing Lake, Suplest and Fizik. Everyone is on-message with the Giro Selector aero helmet, though. 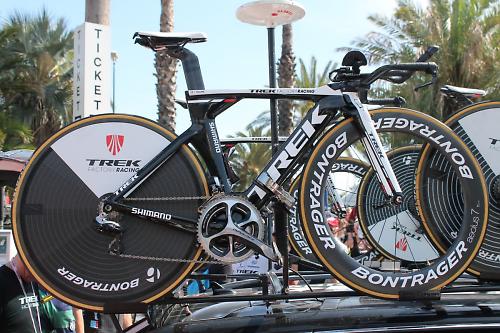 Trek Factory Racing time trial on the Trek Speed Concept. Trek use a tube profile called the Kammtail Virtual Foil (KVF) which is effectively a 5:1 airfoil shape with the tail cut off to improve the performance when the wind is at yaw, and to reduce weight. 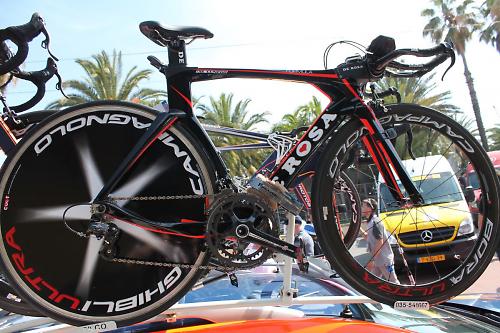 This is the De Rosa Formula King used by Damiano Cunego of Vini Fantini-Nippo. It has an integrated stem and a rear brake that’s hidden behind the bottom bracket. The fork crown flows into the dropped down tube to manage the airflow up front and the seatstays kink out immediately from the seat tube in order to reduce turbulence around the rear wheel. 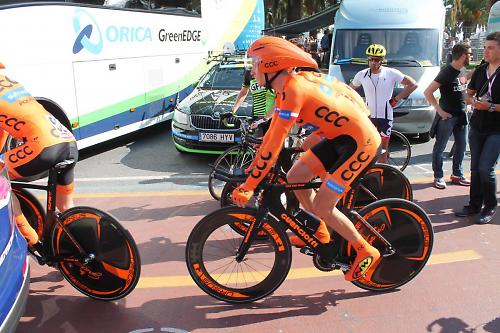 You’re not going to miss the orange of Polish Pro Continental team CCC-Sprandi-Polkowice. They ride time trials aboard the new Eclipse TT from Italian brand Guerciotti (which we can’t see listed on the UCI’s latest List of Approved Models of Frames and Forks).

Northwave are now supplying CCC’s shoes, sunglasses and helmets, including this aero lid that we’ve not seen out in the wild before. 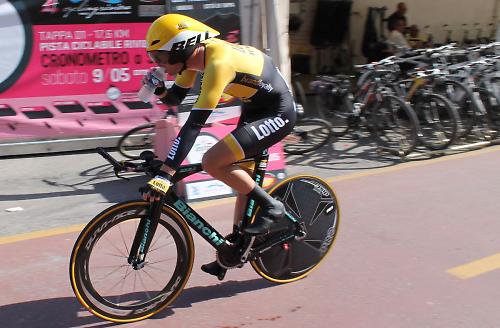 Lotto NL-Jumbo riders are on the Bianchi Aquila CV, the CV standing for Countervail, a material used in certain areas of the frame to dampen road vibration. Doubtless annoying to those people who like to say you should only fit Campagnolo components to a Bianchi, Lotto NL-Jumbo use Shimano. 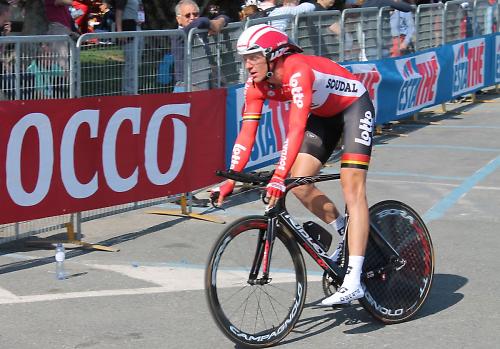 The Lotto Soudal team ride Dean Fast bikes from Belgian compatriots Ridley. One unusual feature is the F-Split fork, each leg of which has a vertical gap down the middle, the idea being to draw air away from the spokes. 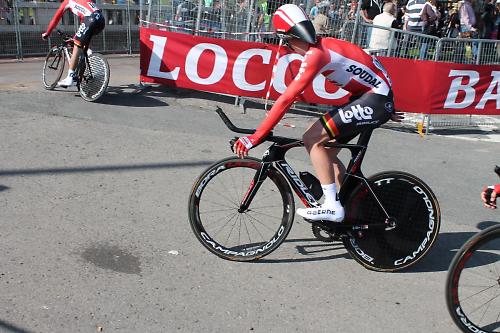 The battery for the Campagnolo EPS electronic shifting sits inside the top tube, just behind the stem.