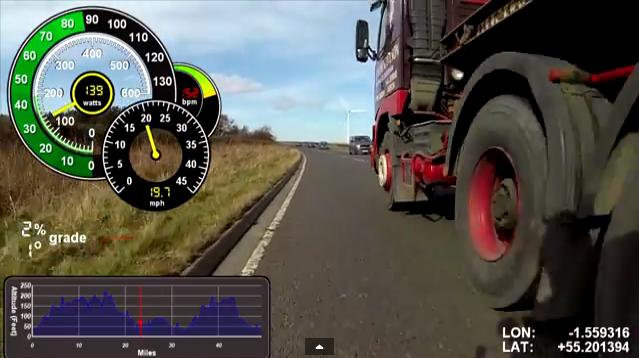 VIDEO: Cyclist posts HGV close-pass helmet cam footage to show driver 'he could have been killed'

A single wobble would have meant death, said cyclist shaken up by manoeuvre
by Sarah Barth

A cyclist who says he could have been killed by an HGV performing a dangerously close pass has made a video shaming the driver and telling him just how terrifying the experience was.

Before the film starts, he tells the driver, from County Durham-based HP Thompson and Son, that he was aware of the road conditions but that he was visible and it was a bright sunny day when the incident happened on March 10.

“I want the driver to get a full feel for how frightening it is when a lorry overtakes a cyclist in this way,” said Quentin Field-Boden, from Northamptonshire.

He said: “it left me quite shaken up. If I was a less experienced cyclist... wobbling about a lot... you could have killed them.

“I hope that perhaps if you do see this video or you’re shown this video by someone... it might help you drive differently in the future, because, take it from me, being on the receiving end of that really is very very frightening.”

Ian Thompson, owner of the lorry company, apologised on behalf of the firm. He told the Northampton Gazette: “I am really upset this has happened. We don’t make a habit of doing this sort of thing.”

Quentin has passed the video onto the police, who say that an inquiry is ongoing.

The video account of the incident joins a growing number of toe-curling videos emerging as the number of cyclists wearing helmet cams grows.

Last week we reported how Sussex police had identified the driver of a Jaguar car who launched an expletive-ridden tirade at a cyclist and also appeared to punch him in a road rage incident earlier this month.

Cyclist Eddie Bell, aged 38, posted video to YouTube of the incident, which took place near Pevensey Bay, East Sussex, the weekend before last. He made a note of the vehicle’s registration number and passed it on to Sussex Police.

In the same week, helmet camera footage of a driver twice brake-checking a cyclist in Glasgow resulted in the motorist, who turned out to be serving a driving ban, being convicted on four separate charges – dangerous driving, breach of the peace, driving without insurance and driving without a licence.

And a few days, before, we brought you news of a Gloucestershire company that sacked a lorry driver who was caught on camera overtaking a cyclist in Lancashire with just inches to spare in what some cyclists viewing the video interpreted as a “punishment pass.”