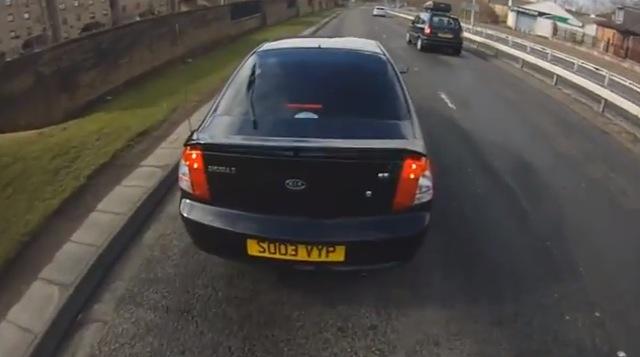 Helmet camera footage of a driver twice brake-checking a cyclist in Glasgow has resulted in the motorist, who turned out to be serving a driving ban, being convicted on four separate charges – dangerous driving, breach of the peace, driving without insurance and driving without a licence.

On Wednesday, the driver, who pleaded guilty in the face of the video evidence, was fined £375, banned from driving for 48 weeks and ordered to perform 150 hours of community payback.

The incident took place on Springburn Glasgow, on 28 April 2013. It was filmed by Dave Brennan, whose helmet camera videos, posted to YouTube under the name Magnatom, have been used on BBC programmes.

Brennan, who co-founded and helps organise the Pedal on Parliament [POP] ride in Edinburgh - the third edition takes place next month - was cycling back from the Scottish Cycle Show, where he had been distributing leaflets for the second Pedal on Parliament ride.

He has kept the video private until now while legal proceedings were ongoing, with the case concluding at Glasgow Sheriff Court this week.

He told road.cc: “Whilst I wish our roads were safe enough that helmet cameras weren't needed, I think this case demonstrates their power.

“Without the footage the case would never have been brought to court.

“I am though disappointed with the sentencing. Had the driver threatened me with any other potential weapon I suspect the punishment would have been a lot harsher.”

The video shows the driver passing Brennan at speed with very little room to spare, as he apparently sought to undertake other traffic.

The close pass – bear in mind, the wide angle used on some helmet cameras such as this one can exaggerate gaps – prompted Brennan to exclaim loudly, his right arm outstretched in protest.

Initially, that seems to be the end of it. But shortly afterwards, the car slows down, Brennan wondering out loud to himself, “What’s the problem?”

As the cyclist gets closer, suddenly the driver applies the brakes. Fortunately, Brennan reacts in time. Then the driver does it again, this time stopping.

“You mate are on camera!” Brennan told the motorist as he got out of his vehicle. “I don’t care,” came the reply.

The pair continued to exchange words until the sound of a siren prompts the motorist to get back into his car and drive off, although it’s clear from the video that Brennan was still nervous that the motorist might attempt to confront him again.