A lonely ride back to race HQ 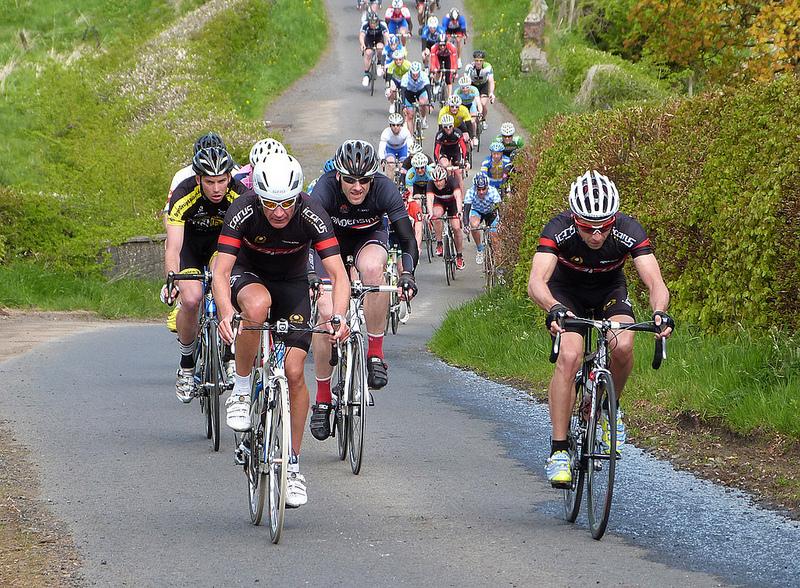 Yesterday's VC Glasgow South race was going well until I punctured on lap 2.  I'd gotten past the point at which I was dropped during last years race and feeling ok for the last lap, with thoughts wandering to the climb up to the finish line at the top of Eaglesham moor, but it wasn't to be...

The last section of singletrack road towards the A77 took my front wheel (snake-bite puncture) and being up near the front of the race I had to wait a while before the rest of the race passed for service.  This came after a series of short climbs so the race was fairly strung out, by the time I got a new wheel the race had disappeared and the service truck got me rolling then promptly left me on my own - you don't get drafted back on in a 3/4 race and there's no team car with a "sticky bottle" either!

So the last 20 miles were spent trying to half-wheel myself in an attempt to get to anybody else so we could work together, the only people I saw were marshalls though - who were kind enough to give me a clap or shout of encouragement as I passed them.  The run up to the finish wasn't as bad as I'd expected and a mate from another local team did well, placing 7th.  There was a crash on the run up to the finish line - demonstrated by the Litespeed with a rather nasty looking broken fork steerer sitting outside race HQ when I got back - hope none of the riders were seriously hurt.  I came in 57th out of 63, 14mins and 23secs down... the bunch was travelling at 30-35mph down the A77 with a decent tailwind, there's no way I was going to match that on my own and the climbs on the back section of the course were brutal with no shelter from the headwind, it was game over after the puncture.

Punctures happen, it's a fact of riding a bike, especially on 23mm tyres on single-track back roads travelling in a bunch at speed.  Could I have prevented the puncture?  Maybe, if I'd been better positioned, taken more note of the road surface on the previous lap, bought a set of tubs (if my wife is reading this... they're on the birthday/Christmas/birthday/Christmas/birthday/Christmas list).  It's good to learn a lesson from races where I've not done that well (ok, that's all of them then!), this one is to be more aware of my positioning, especially where there's a rough road surface.

Having done better than last year in the races I've entered in 2013, I feel like this one is going to be on the event calendar for 2014, I'm determined to get round in one piece and finish with the rest of the race.  It's a great course, and the organisation is fantastic, I'm somewhat oddly looking forward to it already!