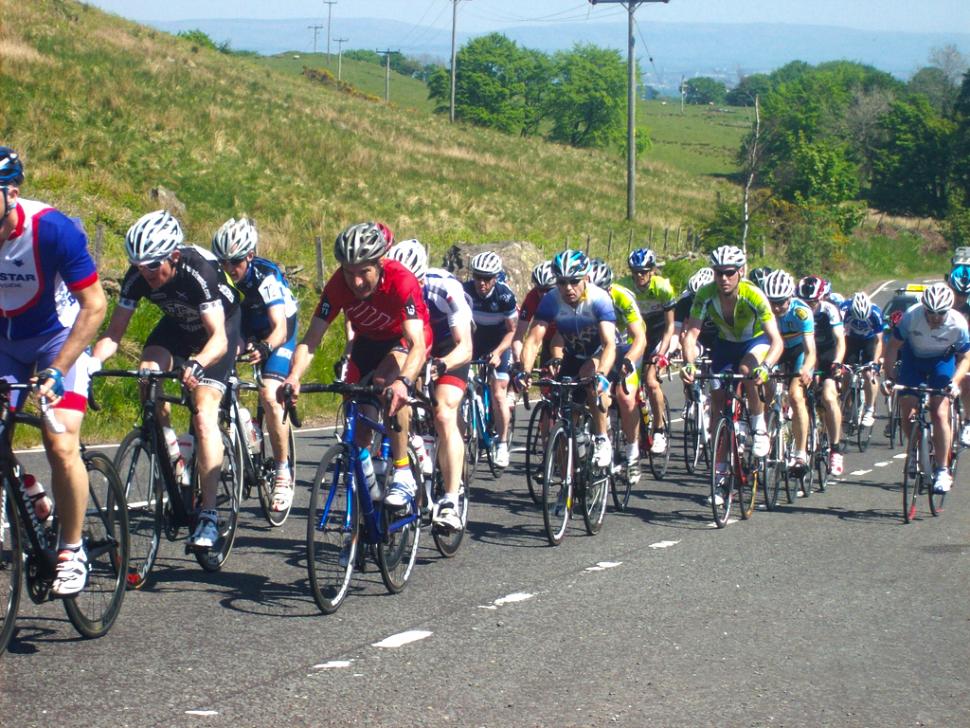 None of these things did happen.

I got shelled on the 2nd lap of 3 after about 30 miles, which is an improvement on the last race I did where I lasted about 15 miles.  But at least I finished that first race.  The call of watching the finish was too strong as I completed the 2nd lap and I headed back to the finish line to see the bunch fight it out for positions instead of battling the headwind up the A77 on my own.  Looking back, that was a mistake, it seemed like a good idea at the time, but in the car  home I realised it was a poor decision.  I won't do it again.

My speed and ability to stick with a group at race-pace has increased, on the first lap I was maxing out on the steepest climbs, stomach in knots, that sicky-taste not far away, but I was sticking in the bunch and thinking that if I could do the same for the other two laps I'd be in with a shout of finishing with them.  Time told that I'm not yet quick enough to keep up that level of intensity for the full distance of a Cat 4 race though, never mind a mixed category race with 2/3's.  After I got dropped I tried chasing on, doing 30-35mph on my own for a couple of miles, I started catching the group but another set of climbs soon saw them disappear into the distance.

Disillusioned is not the word.

I suppose the writing should be on the wall when I look at the training I'm doing and compare it to the training of my contemporaries.  In 2011 I did no high-intensity work and didn't once go out with my club so I should've been more realistic in my abilities.  I have to ask myself this though: Am I prepared to do more? To sit on a turbo in the evenings instead of spending time with my family?  To spend my weekends entirely focussed fully on cycling?  The answer to all of these questions is a reluctant 'no'.  Half a day, a quarter of my weekend, is spent cycling, I don't want to sacrifice yet more time that I could be spending with my kids.  Some people wouldn't mind, I do.

Yep, I'm going to keep trying.  Focus is needed on efforts to increase my ability to suffer specifically on climbs where I'm at my weakest.  I've always concentrated on weight-loss, as my cycling was borne from my need to lose weight, but perhaps I've focussed on it too much.  I thought that if I got lighter then I'd fly up climbs and although I've got quicker, I still don't have the top-end to get up climbs quick enough to keep up with other racers.  I even struggle on the club chain gangs to stay in touch on the hills.  Climbing/top-end work is my weakest area and my illness-ridden winter training hasn't prepared me for the pace of 80 other riders going full-bore, putting in digs to pick off the weaker guys such as myself.  The winter bike didn't help either!

I'm never going to be Pro.

There.  I've said it.  We all, deep-down, a tiny bit, think that we might be able to keep up with guys who are paid to do this sport.  Even becoming a sponsored rider is a huge achievement, but I don't think it's going to happen for me, certainly not at the moment!  None of the above makes me love cycling any less, in fact it makes me love it even more.  My next race is hopefully in a couple of weeks if I get an entry so there'll be another chance to test myself.  I'll aim to finish with the bunch, but if not, I will be finishing the race.

Main image courtesy of ffffan via. flickr  I'm on the right hand side of the pic at the back, white helmet, blue top, head down!