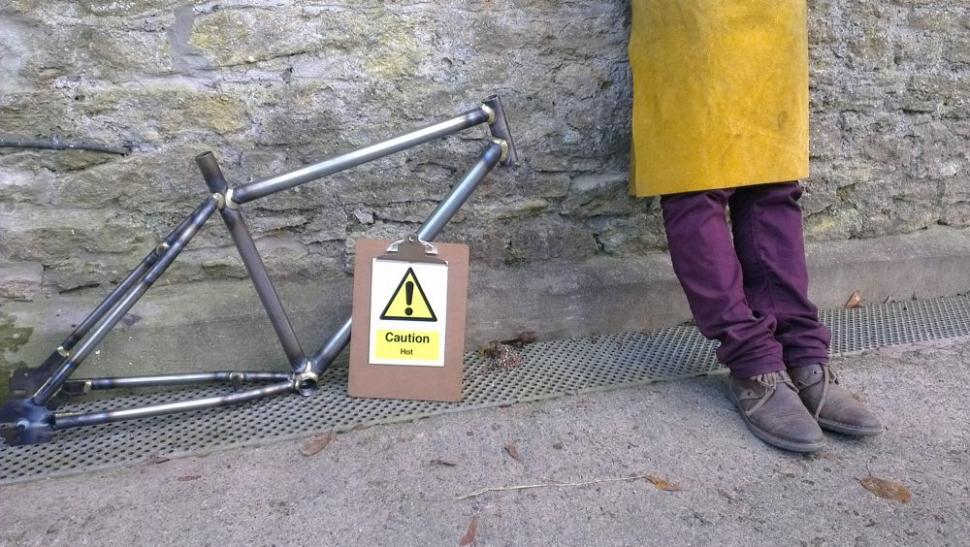 The final day: time to fire up the torch and make that frame!

Last day, and the big one: time to knuckle down and braze the frame proper. Well, nearly time. First there's a good deal of scrubbing of flux and filing of the tack points to make the final brazes as neat as possible, given the limited skill I've acquired from three days of intensive learning.

We have to take it in turns and Tomasz is first up while I try desperately to hone my skills on bits of scrap. When all the bits of scrap are joined together – neatly or not so neatly, depending on the bit in question – It's time to sit on the comedy primary-school-sized stool in front of the computer and have a quick nose around BikeCAD while Tom finishes off his bike. BikeCAD looks to be a very powerful bit of software; you can even print out guides for cutting your mitres once you've designed your frame. I've barely scratched the surface before Tom's frame is cooling outside and I'm next up. This is it. 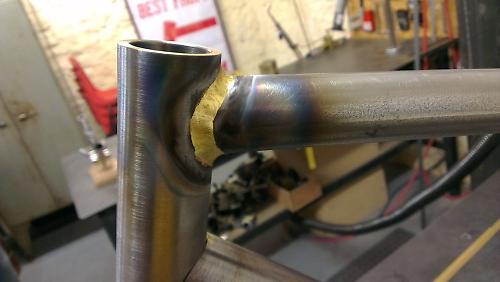 Head tube first, and the top tube braze. A fairly simple one with a nice easy shape and plenty of access, and a decent channel for the braze because the top tube is a bit smaller. Even if I say so myself, it goes pretty well. Tom and I have been brazing to about the same standard throughout the course, so there's a friendly rivalry and it's pushed us both to try and up our game. I've seen his finished frame; considering he's had the same amount of tuition as me, it's basically a work of art. I'll do well to end up with one that looks anything like as tidy.

Down tube is next and that's okay too, a bit blobby at the sides where there's no channel between the tubes and it's harder to control the size of the pool of molten brass. Then it's a dash round the top tube/seat tube junction – another straightforward one – and the tops of the seat stays, which are trickier, especially down the middle. All the time Andrew is there, holding the frame, adjusting the position, checking the flame, offering advice and generally being a positive influence on the whole thing. 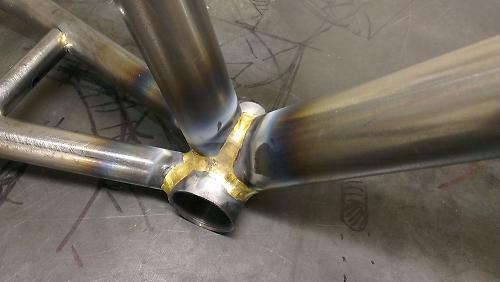 The bottom bracket is next: five tubes coming together and you have to braze the lot in basically one go. Up over the top to start and then it's a methodical progression round the surfaces, slow where the brazes meet, quick near the edges, slow, slow, quick, quick, slow. The heat starts to rise and the shoulder starts to ache, it's hard to get a good eye line through some of the corners, I end up nearly poking Andrew in the face with my brazing rod a couple of times as I struggle to get in position. But then we're rushing across the bottom of the down tube and it's time for a breath of fresh air and a Quality Street. And only the rear triangle to go. 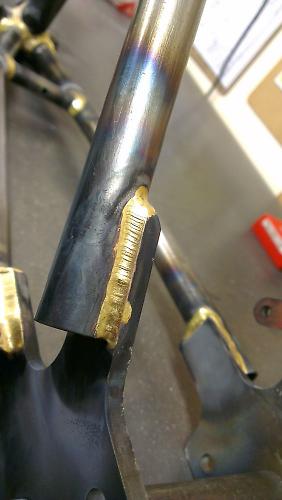 There's the small matter of the seat stay and chain stay bridges to attend to – both reasonably straightforward – before Andrew's preheating the massive 6mm steel plate dropouts for the final job of the build. It's a nice place to finish, with the channel between tube and plate offering the chance to create some very tidy joins. Some of my best work. One's almost pretty. And then we're done and the frame's outside the front door cooling down and I'm both massively relieved I've finished and sad to realise that, well, that's it. It's made. There's obviously the small matter of facing off the bottom bracket and head tube – the heat of the torch warps them very slightly – and cold working the frame into alignment. The jig does a job, but the finished thing is never quite straight. My head tube is in exactly the right place. The seat tube, not so much. In the end I run out of time and we don't quite get the frame faced off and straight. But that does at least mean that I've got an excuse to go back. 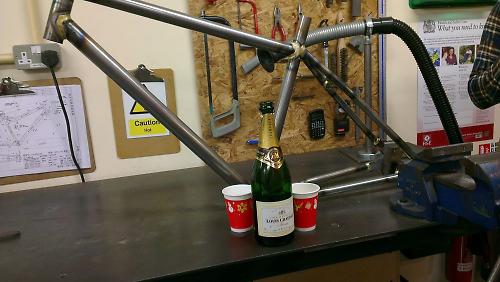 I've talked to a fair few people about The Bicycle Academy experience. More than one has been surprised that you don't get a frame to take home. Why would you spend all that money on a frame building course when you don't even come away with a frame? Well, here's why:

1) You really do learn the skills to make a bike on this course. You get to do a bit of everything. Other courses will assess your level of aptitude and you'll do more, or less, of the actual build to make sure you end up with your frame, looking all nice. That's not the case here: you do the whole thing, and it's less important that it looks nice than it's robust and functional. The next one can be pretty.

2) Andrew's a genuinely talented teacher. Even the legendary Brian Curtis will begrudgingly admit that for the level of the learning in the framebuilding course, Andrew's better at teaching it than him; Brian's going to concentrate on the 1:1 brazing classes when he goes back to teaching after Christmas. Why is that the case? Probably because Andrew, as a comparative novice compared to Brian, is more in touch with the thought processes of what he's doing. Brian will tell you that when he's brazing he's not thinking about what the hand holding the rod is doing; it's automatic. It just does what's required, the muscle memory born of 40 years of experience. It's fascinating to watch him do it, and hard for him to tell you how it's done. One on one, where you have the basic knowledge and you're trying to hone your skills, you can watch and learn. There's few better people to learn from.

3) The bike is going somewhere it'll change someone's life. And you don't really need another bike, do you. n+1 notwithstanding.

It's been a fantastic four days. Intense and tiring and fun and brilliant. I'd recommend it to anyone, whether they think they need to know how to build a bike or not. It's rare in adult life to learn a genuinely new skill. Get brazing. 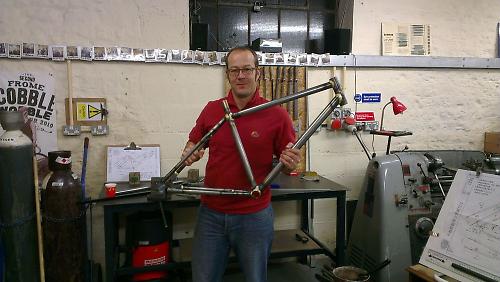