Richard Mitchelson is a keen cyclo-cross racer and will be charting the ups and downs of the season in his new diary. You can read about his first race at Hog Hill here, and here's his report from his second race in Brighton last weekend.

I sit here having just raced at Happy Valley Park in Woodingdean near Brighton. I'm back earlier than usual because I live only 15minutes away from the race venue and its been a great day. The weather, course and my legs all seemed to work out and apart from a slight error getting my foot in at the start I know I have done all I can to get the result I want, some [my long suffering cycling widow wife being one] say perhaps deserve for all the work I've put in over the cyclocross off season.

Parking was sparse and so a handy side street became my base, fellow riders informed me that we couldn't sign on until 12, which was about 40mins away, so instead of getting out the turbo I left it in the car and had a good look at the course, relaxed a bit and caught up with friends and acquaintances. The course was not technical, it had few climbs and it was wide, fast and predominantly grass, it was a park after all. The only tricky bit of riding was trying to avoid the smattering of dog eggs across the course... as I say, it is a public park. Without the usual sections of single track all the concerns and worries I had from the week before evaporated.  A fellow racer who works for a cycling based publication that comes out every week told me this was going to be a straight out horse race, he told me I should do ok at that.

I was second in the queue to sign on... a small victory for hanging about a bit, and after getting my number I headed back to the car, chugged a gel [Torq Orange and Banana with Guarana for a bit of a kick] packed up a small bag of essential bits, grabbed my spare wheels and headed for a warm up on the course rather than the turbo. I thought that learning the course with its many hairpins was going to do me better than sitting on a turbo for 20 minutes. It did.

Taking the first lap of my warm up laps steady to think about lines through corners and exits into the next one I realised I was going to be able to carry a fair amount of speed through the bends by using the full width of the course, and with it being the widest course I'd been on in a while I was able to keep my minimum speed much higher than before. It also gave me the chance to get back on the power sooner and try and keep things flowing and smooth, things I was desperate to do last Sunday, but we know how that ended.

Stripping down to my race kit and leaving it with a friend I headed to the start area and kept my legs turning over by cycling large circles in the infield. I took a little air out of my front tyre and I was ready to go.

The gridded riders were called and I ended up right amongst them on the start line, things were looking up for sure. I went through my final checks and got ready.

My legs started to turn and for five revolutions I missed my pedal, instead of getting frustrated I briefly took a second to look down, clipped in and roared after the 15 riders or so that had come around me during my few seconds of fannying around. It was a shame but nothing was lost. I had watched a video earlier in the week with current national Cyclocross champion Ian Field, where he had shared the pearl of wisdom that you should be able to start from any part of the grid and still win as you can pick off riders throughout the hour. With this ringing in my ear I made my first two laps count. I headed for the first main hairpin and jumped off as riders slowed. I ran through the middle making up some ground, and perhaps pissing people off in the process, but my re-mount was a good one and I was away again with a large amount of the field still to turn. 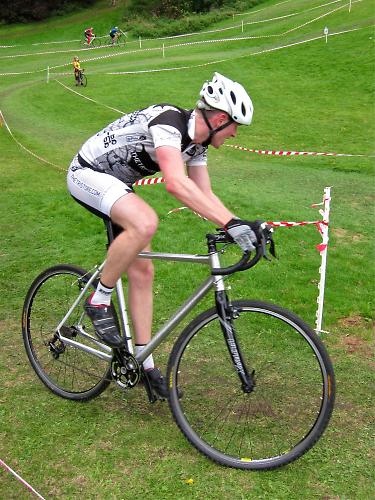 The race continued at a very high pace, and I found that I was able to hold wheels, take my turn at the front of the string and head after riders if they made any move. I was part of a group of five riders which soon got whittled down to three with me hiding from the wind at the back. It was tough going but as I looked at my Garmin to work out how long I had to go I noticed I was going into the middle twenty minutes still feeling good, working very hard, but able to maintain the pace. We went through a couple of laps like this, I wondered who was going to make the move away, and due to the nature of the course I could keep tabs on the riders chasing after us. Eventually one guy went into what seemed like overdrive, he took one guy with him and left me and a younger rider. We were then caught by a couple more guys and the whole thing started again.

The difference to most races I've done was that this time I was racing well, trying to read the race with the riders I knew I was racing for our final position. It felt good and made me push much harder than I did last week. So hard that at one point with 3 to go I found myself tasting a bit of vomit... But I kept pushing on, this could have been my best race to date and I wasn't about to sit up.

The leading two riders passed me with 3 laps to go, much better than last week. Eventually it was only the top 10 that came passed. I spotted groups moving well containing familiar faces and was determined for them not to come past.

As the last lap bell rang I dug in, I'd managed to avoid the dreaded course tape to the cassette which I'd seen two or three riders get snarled up with and I started to pick off a few more people who'd gone off to hard. Cheers from friends were very welcome, and with the final section on two steeper banks I knew that I'd done all I could. A couple more hairpins and a sprint for the line. The race had given me confidence I didn't know I had after last week, and with quite a bit more fitness and more importantly resolve than I expected.

I sat in the car with a big grin on my face. I'd done all I could and raced right at the limit. Now I had to wait for result.

I checked the results on Monday, and to my surprise I appeared twice. Now I've watched enough back to the future to know that Dr Brown says to never let your future self see your present self so alarm bells were ringing. I contacted the organiser. I was at 30th and 74th, I knew that both were a bit off, 74th was lower than some guys I'd finished ahead of and 30th ahead of guys who'd beat me. After the re-shuffle I was moved to a position I was still REALLY pleased with.

I knew I'd got top 50 but to have it confirmed is a massive boost. It just goes to show that when all the cyclocross stars align you can move up and get the result you hope for. It's my best placing ever and I just need to cement it now and stay in that region as long as I can. The non technical nature of the course and good conditions played to my strengths, but for the first time I was able to use tactics and what some people call "race craft" calling guys through knowing a head wind section is coming then sitting on their wheel while they take the brunt of natures gusts.

There's a possibility that by the time the results get to British Cycling I may have shifted on the final order a little more, but if I stay top 50 ish I'll feel it was a job well done. The British Cycling report that came out said there was around 189 riders in the field that day, the results say 140ish but even so this was a step up, from last week, and from last season. The next race is at the London Leagues spiritual home at Herne Hill Velodrome and as long as I can keep this slight snotty nose at bay I will be racing hard again for that top 50 finish.

Thanks for reading and see you on the start line.