Diary of a cyclo-cross racer: Richard Mitchelson's first race of the season

Richard Mitchelson is a keen cyclo-cross racer and will be charting the ups and downs of the season in his new diary. And the season started for him with a very wet and very muddy round at Hog Hill. Sounds like perfect 'cross racing conditions to us.

Dawn broke on Sunday 23rd September. Well I was told by the weather man that it had, I couldn't see the sun through leaden skies and sheet rain. 'Proper 'cross weather' the gnarled hard men of my sport would say.

It was in stark contrast to the start of last season during an Indian summer with 20 degree heat where bottle hand-ups seemed the norm. I was heading to the Redbridge Cycle Centre (or Hog Hill as it's also known) for round two of the London and South East Cyclocross League.

Sitting in the car with rain hammering on the roof you often have to convince yourself that this is something you love doing. You know deep down that once you've finished and are back home and warm again, that you'll look back fondly at what's about to unfold, no matter how you get on. I left my wife snugly in our house with the weather beating it's rhythm upon the windows with the words "enjoy yourself!" Right then, that's what i should probably do. 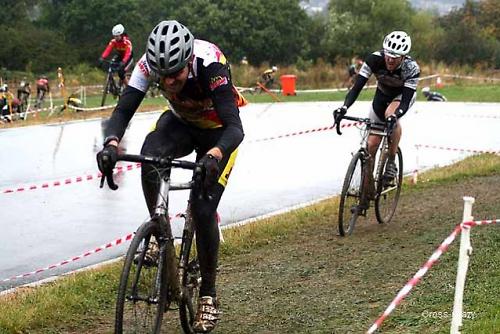 After a quick sign on I picked up my number and reacquainted myself with friends I'd made the season before, a quick chat, a couple of hand shakes and back to the car to set the bike up. I failed to warm up enough last season so I quickly jumped onto the turbo in the rain beneath my waterproofs to get my legs turning. It didn't last long, but it was long enough in the rain and I felt like anything was better than nothing. Pinning on my number I was ready to go. The rain got harder.

It wasn't to cold. I have a tendency to overheat so just went for a base layer, race jersey, arm warmers and shorts with a thin craft jacket for my warm-up. I headed out on my sighting lap and got into the swing of things. The plan was to keep off the front brake through the tight twisty bends and let myself glide a bit more to keep things smooth. Well, this was the theory.

Within half a lap I was flat on my back, thrown from my bike like a rodeo rider into the mud. I picked myself up, no harm done, just a bruised ego and battered confidence. Instead of powering on and keeping my eyes forward on my line the dumping I'd just taken made me tentative, possibly the worse thing in these conditions. Confidence is key, not worrying about falling often means you won't. I was suddenly a bit of the opposite.

Dumping my excess kit with a friend in the warmth of Redbridge Cycle Centre cafe I headed down to the start. My spare wheels were in the pits, I had a number on. I was already soaked to the skin. I was ready to go...

The seeded riders were called forward, in the chill of the rain the list seemed to last for an age. I find nerves make me chatty, some would say a gob shite. If you have the unfortunate luck to end up next to me on the start line of a 'cross race I will apologise. Finally the list of seeded riders ended and we trudged forward finding places in the gaps left by the hitters, squeezing up as close as wheels allowed trying to get the odd inch here or their on rivals from last season. I'd done well with my place on the start, I looked round to see a large field of damp faces behind me. I clipped in one foot, and had one last check of the bike.

Instantly I was out of the saddle and sprinting up the hill to the spiralling infield section quickly. The first bottleneck came and I was off the bike quickly pushing my way around slower riders trying to gain some ground. I lept back onto the bike and felt good. I think it was my best start to date. It wasn't to last, I should have had more than one warm up lap, it was a school boy error. As I hit the back of the course there was a downhill sectionwhere after a raft of riders had skidded down it it was now like ice and as my confidence was low I knew I was going to struggle.

I was out of the saddle with my arse well over the back tyre to aid traction but once again at the bottom I came off. I picked up the bike, swore a lot, which I'm sure wasn't doing anyone any good, and pushed the bike back up the incline in front of me. This downhill section was my nemesis during this race, I could make up ground on the rest of the course but was loosing lots of time here. Thoughts in my head of the super knobbly tired MTB in the garage at home was little solace, this was cyclo-cross after all.

The laps passed and soon I found my place within the race. Like any 'cross race it's tricky to tell where you're placed, unless you're right at the sharp end. But the good thing about it is that whether your first or one hundred and first the racing is still fierce. Nip and tuck, trying to beat the person in front like you were racing for the win.

The leaders caught me a while after half distance, but by this point I was focused on my own race. I was stuck in a race with Beate Kubitz of the Velo Club Moulin, and it was nip and tuck all the way for the last three laps. She would come past me on the downhill skid fest and I would dig in and come passed her on the infield and hurdles - something I was pleased to see improving after last season.

The bell lap came, and I knew at least I was going to finish. A glance over at the wonderful warmth of the cafe revealed that some big names were going to DNF, a few looking glum at the race they wished they could have finished. I guess no matter how far down the pack I still finished. I dropped into the final lap and pushed on hard for home. It was only going to be a few minutes and I had to make the best of a bad day in the saddle.

On the road section I hit the drops and sprinted hard for the next bit of off road. My brakes by this point had become pretty useless, a glance down and the pads had been eaten by the grit, filth and clinging on for grim death I'd experienced throughout the race. Perhaps I should have fitted new ones pre-race. We live and learn.

I pushed the bike up the final muddy incline running as fast as grip would allow. I could spot Beate at the top of the hill so I clipped in and pushed on, I knew I could catch her. It took me to the first bend of the spiralling in field to reach her rear wheel. I then picked my moment and attacked for the last time, much to Beate's annoyance. With the rain still falling hard I crossed the line and dropped my head disappointed. It was the hardest race I've done, and I guess finishing it was enough but I knew that I could have done better if I hadn't let the conditions get the better of me.

The facilities at Redbridge were great. Free power washer for the bike and shower for me, something that a lot of cyclocross races don't have. The heaters were on full in the car as I headed home. I loudly sang away my disappointment knowing that I've got a whole season to put this result away as a bad experience. 81st place out of around 112 starters, something I'd quickly like to forget.

I'll be racing again this Sunday and I'm determined to show the work I've put in over the summer racing MTB's and training in the gym and on the road. Onwards and upwards, here's hoping I can report a much stronger performance next time.

Find out more about the Mosquito Bikes London/South East Cyclo-Cross league at www.londonxleague.co.uk

1
Cycling club chairman complains of being held up by cyclists riding two abreast
2
Rapha criticised over Pantani water bottle text’s links to eating disorders
3
Police appeal after three cyclists killed in Cleveland area in less than a fortnight
4
Near Miss of the Day 448: Transit van driver in very close pass
5
Cyclists called on to support “10 key changes” to Highway Code
6
Derbyshire cyclist chanced M1 as a 'shortcut'
7
Fix Your Bike voucher scheme opens to public tonight – here’s how to get one
8
Boris Johnson reveals how he will bring in “new golden age for cycling”