6
10
Superbright aluminium rear light for those who don't mind lugging around something a little larger than most
300-lumen flash mode is REALLY bright
High build quality
Good side visibility
Easy to use modes and button
Large form factor and heavy
300-lumen flash mode only lasts 2 hours
Weight:
79g
Contact:
www.bob-elliot.co.uk

The Ravemen TR300 USB Rechargeable Rear Light boasts a large output of 300 lumens, which means it's easily bright enough for night and daytime visibility. Run-times are generally good, but this is at the expense of a large form factor and higher weight than many of its rivals.

Pulling the TR300 out the box, it immediately feels like a quality bit of kit. The body is made from anodised aluminium which feels a lot more robust than plastic lights, but it's also heavier than some. The Ravemen weighs in at 79g, which may not sound like much, but is almost twice as heavy as some of rear lights that we've tested. For example, the Lezyne Strip Drive Pro also features a 300-lumen flash mode and is just 53g.

Partly responsible for the weight is the high-capacity 1600mAH Li-Ion battery, which results in the following claimed run-times:

Now, 45 lumens may not sound like much for the highest constant mode, but my word is it bright; this is certainly not appropriate for even a socially distanced group ride – I was told so! The low mode of just 8 lumens is certainly more frugal, lasting a massive 58 hours; okay, it isn't the brightest, but when you're out riding for longer than expected and the battery is running low, any light is better than none.

The four flashing modes cover a wide range of scenarios: the Flashing 1 is ridiculously eye-catching and best reserved for daytime use only. The downside is it only lasts two hours, which limits its use. Even while commuting in daylight I opted not to use this mode as 45 minutes riding time each way left little wiggle room if things took longer than expected.

For most of my solo rides I opted to use the Flashing 2, as the 145 lumens proved plenty bright enough and 8.5 hours' run-time meant I was getting a few rides out of it in between charges. In general, my own experience with the claimed run-times was the same as Ravemen's claimed times, although the weather has been mild which usually helps.

The lens sits proud and means that in whatever mode you select, a fair bit of light spills out of the sides, aiding visibility. This is particularly useful when commuting or on rides with lots of junctions as it helps traffic see you from more angles. 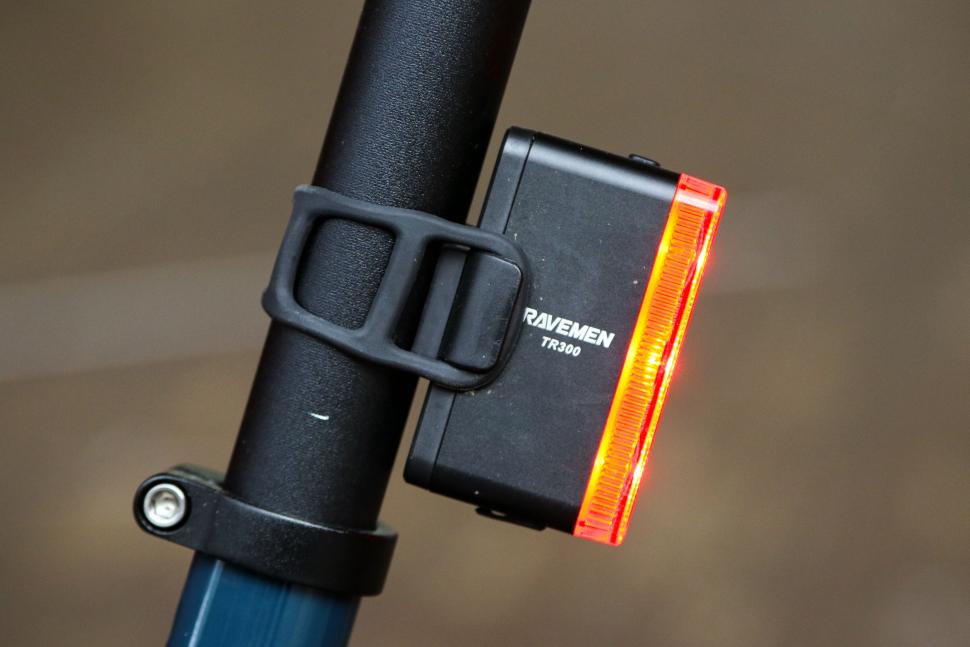 I found that the light will recharge in a smidge under three hours from a wall socket, although it will take longer from lower output sockets such as a laptop. While charging, an orange light blinks, but it's worth noting that it then turns into a solid orange light when fully charged and not a green one like I was expecting.

A feature that many of the Ravemen's competitors don't have is an auto on-off; this basically means that the light will turn off when it doesn't sense any movement for two minutes. I found this worked as it should and is very sensitive to movement or vibrations, which is good – it won't turn off when you don't want it to, like on a smooth road. To be honest, I had little use for it, only really finding it useful at the odd café where it worked well – instantly lighting back up when I grabbed the bike from the rack on the way out.

A feature I found more useful was the memory function, which remembers what mode the light was switched off in and jumps straight back to it when the light is turned back on. I soon found a favourite mode, and this saves time trying to find it.

A single button is used to navigate the modes, and it's situated on the top of the light. A single press switches between modes, and unlike on some lights I've used, such as the Knog Blinder Road R70, this one is really easy to use while riding along as the button isn't recessed or covered in rubber. 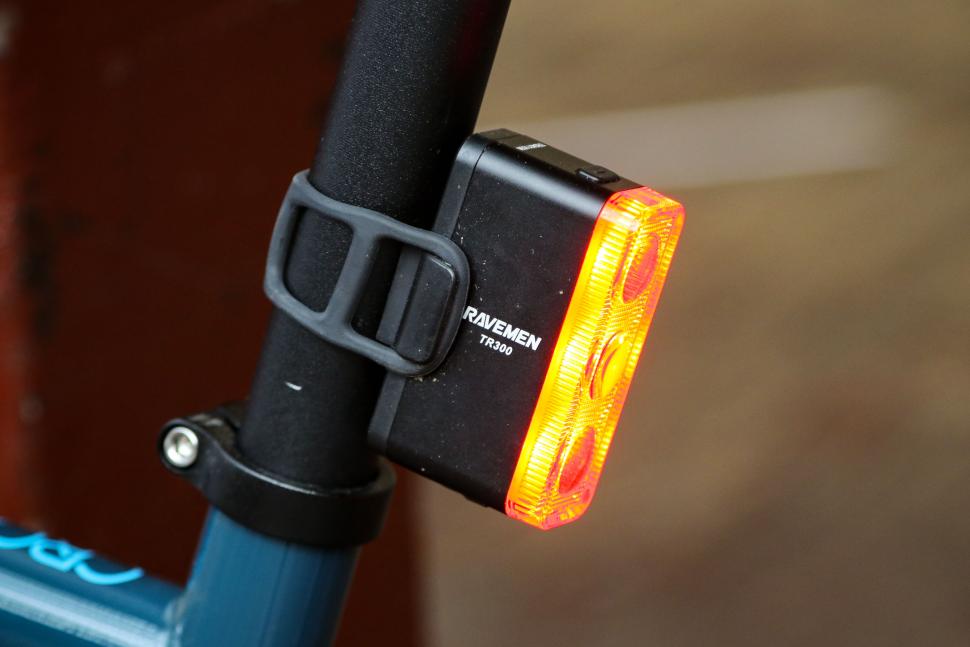 The TR300 has an IPX4 rating which means that it can withstand water splashes from any direction. This is pretty standard for rear lights and during the last month of testing I haven't had any issues despite plenty of soggy rides. However, considering the price of the Ravemen it's a shame it doesn't have a higher rating, such as the IPX6 of the Exposure TraceR Mk2, as I normally find that water ingress is the culprit for untimely failure.

The Ravemen comes with two mounts and two bands to suit both standard round seatposts and aero seatposts. The rubber straps are robust and the long one fitted around the largest aero seatpost I could find.

On a round seatpost the mount worked perfectly, but on a 'modern' aero seatpost with a cut-off kamm-tail shape I found that neither of the mounts could make the light stay straight. Liam had a similar issue with the NiteRider Sentry Aero 260 that he tested, this too not liking the square shape of an aero post.

The supplied 'aero' mount does work well with aero seatposts of the pointy variety, though, like you'd find on a Specialized Allez Sprint, for example.

> Should cyclists use daytime running lights?

Compared with competitors' lights I'd say the Ravemen is priced fairly – the Lezyne Strip Drive Pro 300 I mentioned earlier, for example, is also £50, and though it doesn't get the fancy aluminium body, it is smaller and the star feature 300-lumen flash mode lasts five hours instead of the Ravemen's two.

The Knog Blinder R70 also has a smaller body, but is slightly more expensive at £54.99, and the run-times are shorter. It doesn't have the 300-lumen mode either.

If you're looking specifically for an aluminium body, there's the IPX6-rated Exposure TraceR Mk2 ReAKT I mentioned earlier, but is more expensive at £64.95.

The £49.99 RRP gets you a well-made light that really does pack a punch. The battery is more than big enough to provide good burn-times, but on a few modes, such as the two-hour Flashing 1, this has been compromised for light output more than I think is necessary. I'm happy to let the mount sliding issues... slide... as not everyone will have a squared-off seatpost and the mounts did work excellently with others. The large body will concern some people less than others; personally, I'd prefer something a bit sleeker, especially on a race bike.

The TR300 is certainly bright, which makes it an excellent choice for daytime use, but it is quite large and the 300-lumen mode only lasts for two hours.

Internal side reflecting stripes, enhancing the side visibility and increasing the rider's safety

Auto on-off mode for convenient use

Compatible with round and aero seatposts

Button is one of the easiest to use while on the bike, and side visibility is excellent; could only be improved by a battery level indicator rather than just a light when it gets to low power and needs charging.

On 90% of seatposts very good, the rubber straps are robust and secure, the mounts are easy to swap and worked very well on round or pointy seatposts. However, on a modern aero seatpost with a squared-off rear, I found that neither mount prevented the light from slipping around.

It's been fine so far, but the winter will be the real test. For a light of this price I'd expect a rating higher than IPX4. The Exposure TraceR, for example, has an IPX6 rating although it does cost £15 more.

Battery life in general is very good apart from in that 300-lumen mode, where I'd have preferred it to flash a little less often and the run-time to be higher than two hours.

Very bright; side visibility is very good and there are enough modes without being excessive.

Aluminium body feels very durable, as does the lens. I usually find lights break because of water ingress, and this has an IPX4 rating which is average.

It performs well – most modes are useful and very usable on a day to day basis. It hasn't broken, and the low power mode lasts for ages which means you're less likely to get caught out.

It's REALLY bright in the 300-lumen flash mode.

Slipped around on my squared-off seatpost.

The prices for a light of this ilk are very similar: Lezyne offers two excellent options in the form of the Strip Drive Pro 300 at £50 and the Zecto Drive Max at £48. The Niterider Sentry Aero has a similar form factor to the Ravemen but its highest mode isn't quite as bright at 260 lumens, although it's £10 less. The Knog Blinder R70 is slightly more expensive at £54.99, and doesn't have the 300-lumen max mode, but it's smaller in size.

It's well made and easy to use, even when on the bike. However, the burn-times come at the expense of a bulkier unit, and for the price I'd like more than IPX4 water resistance. 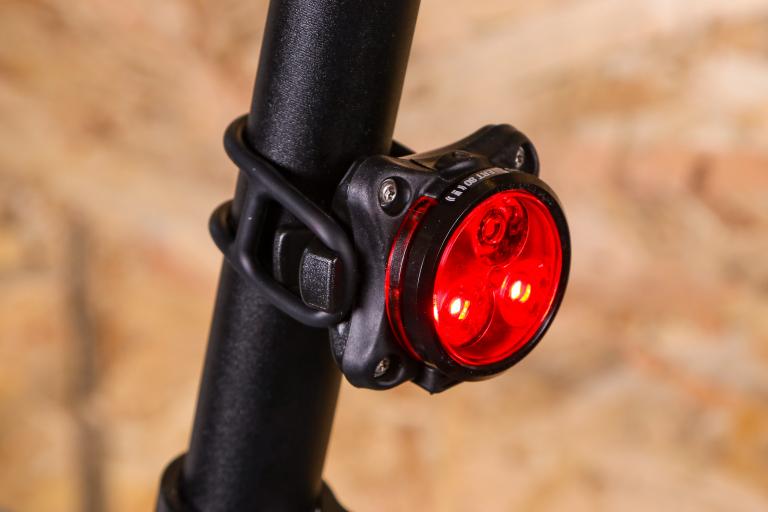 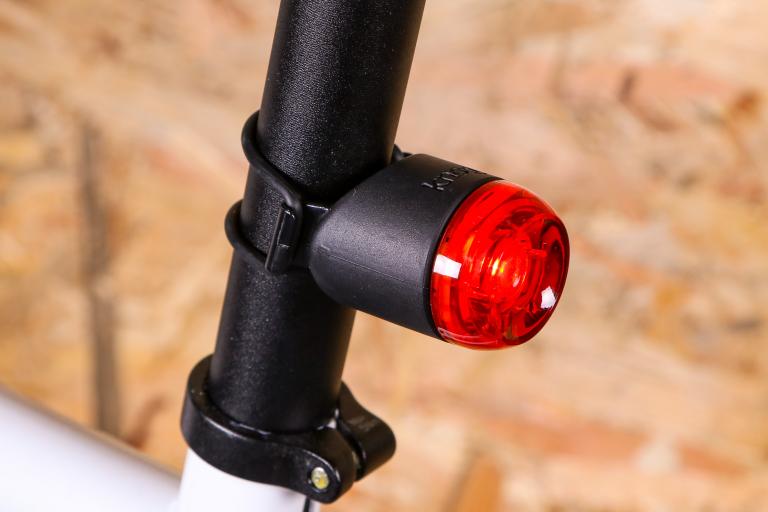 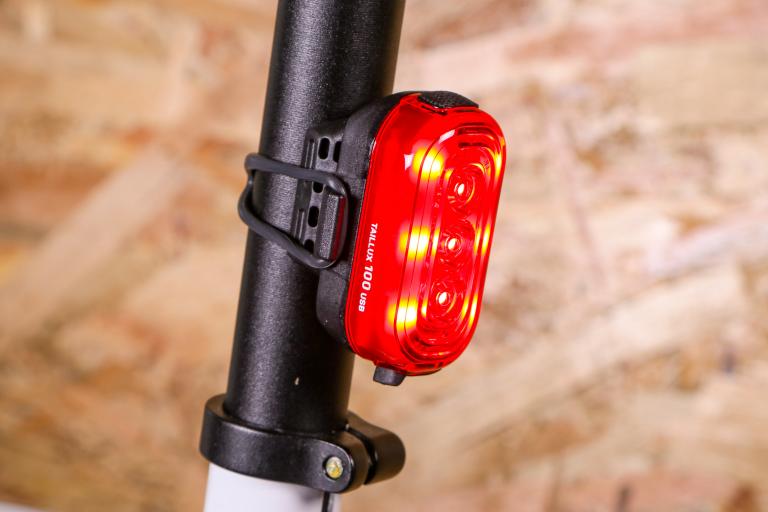 Bright, eye-catching LED patterns and decent burn times, but easily switched on in your bag 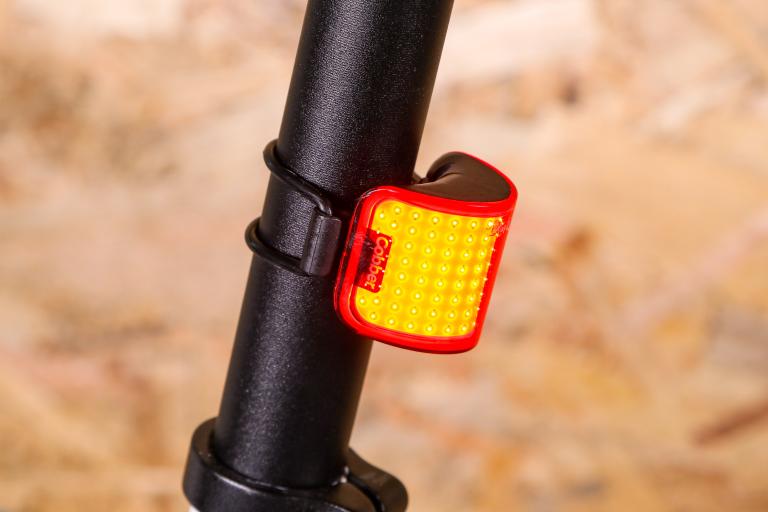 Literally brilliant for side visibility in a commuter environment; expensive because of clever but not always essential features