The Magicshine SeeMee 200 is a very potent and eye-catching rear light with a neat cube design. The 200 lumen claim is a bit sneaky – that's with the brake light activated – but even so, it's a winner with some very practical settings and good run times. Unfortunately, to get those run times you have to switch the brake light function off...

There's a fair bit of technology packed into this little composite cube, and it's all well sealed from the elements with an impressive IPX6 rating, meaning it can resist heavy rain and pressurised water (but not submersion so avoid, you know, harbours and river beds and stuff). 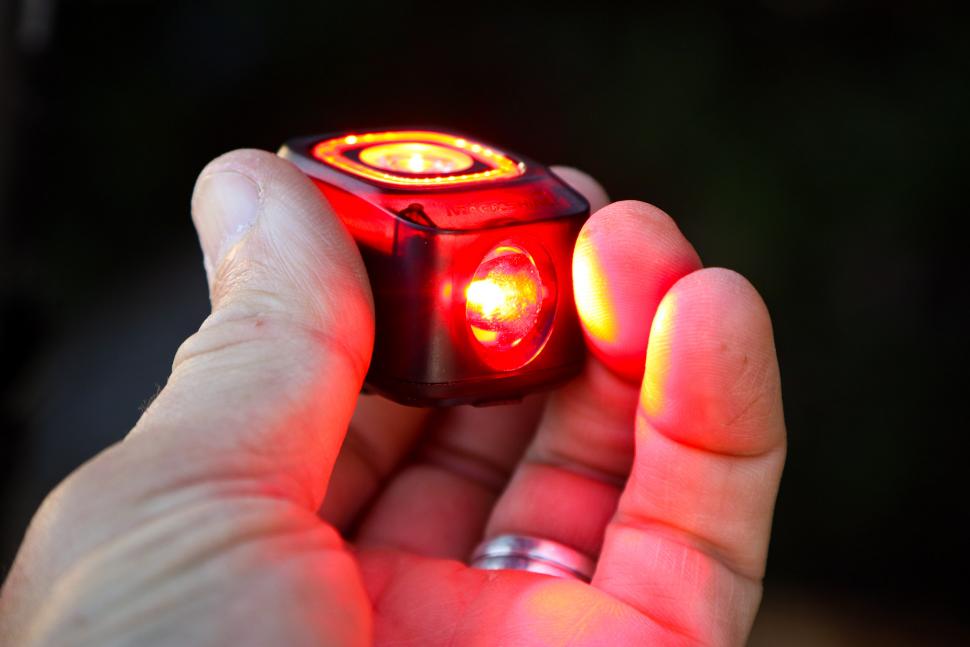 Look closely and you notice not one but two lenses: a main light and another beneath, which Magicshine calls the 'tracing light'. This projects a 360-degree arc of red light down to the road. It's not a not a new concept, but probably the most effective version I've come across.

The main lens casts a 260-degree arc, which should avoid stealth moments when turning. The large main Cree LED is flanked by an outer wall of tiny diodes. 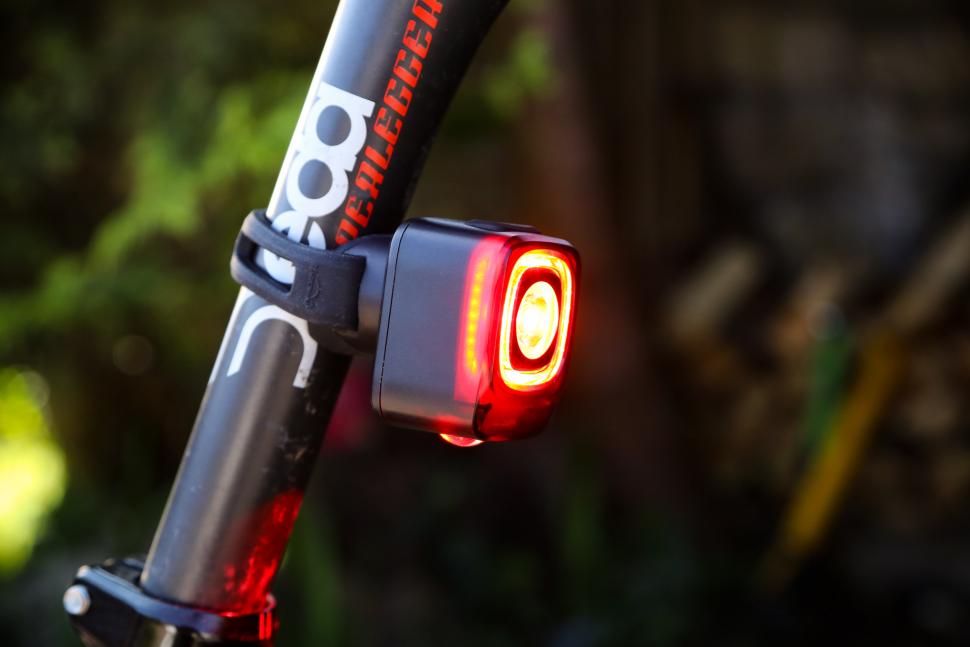 Though not quite bewildering, there are eight settings and it's a good idea to sit and digest them before heading off for the first time. Broadly, though, the modes are divided into steady, flashing, and smart.

There are three steady: high (140 lumens), mid (70 lumens) and low (30 lumens). Next you get four flashing modes: Breathe, Comet, Flash and Interactive. All are 140 lumens, and run different sequences and tempos.

Last but not least is the smart setting, where an ambient light sensor adjusts intensity between 140 and just 10 lumens for maximum efficiency. It also switches off the trace light during daylight. 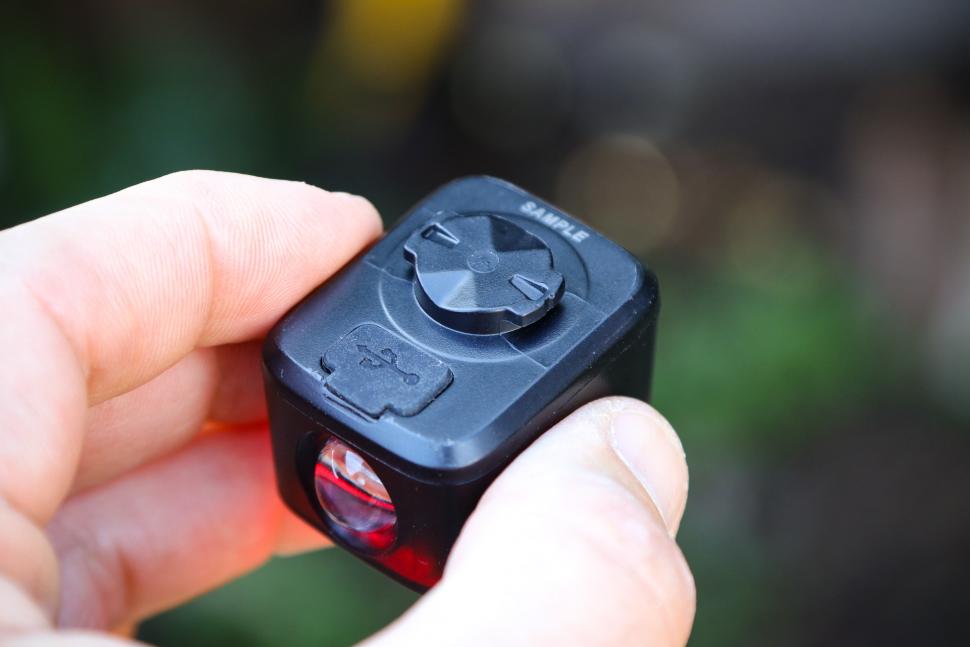 There's a useful, automatic power kick down when the battery reaches five percent (which it will surprisingly quickly if you're running the brake light function). From there you've got around 20 minutes before the system shuts down.

The battery indicator is functional, if crude. Green denotes anywhere between 100 and 20 percent, whereupon it turns red – there's no amber. Get really low and the red starts flashing.

The lithium polymer cell refuels from the ubiquitous micro USB cable, and a full charge (on mains power) takes two hours. Bargain on another 20 minutes or so from a laptop. Much like everyone else's, the indicator switches from red to solid green when fully juiced. The charge port cover is a reassuringly snug fit, and I haven't felt the need to add silicone grease.

The SeeMee 200 uses a sturdy rubberised 'watch strap' which has entertained the full zodiac of post diameters and, crucially, much thinner things like seat stays too (I've even successfully mounted ours to helmets). There's also a saddle rail mount for a really sleek fit. 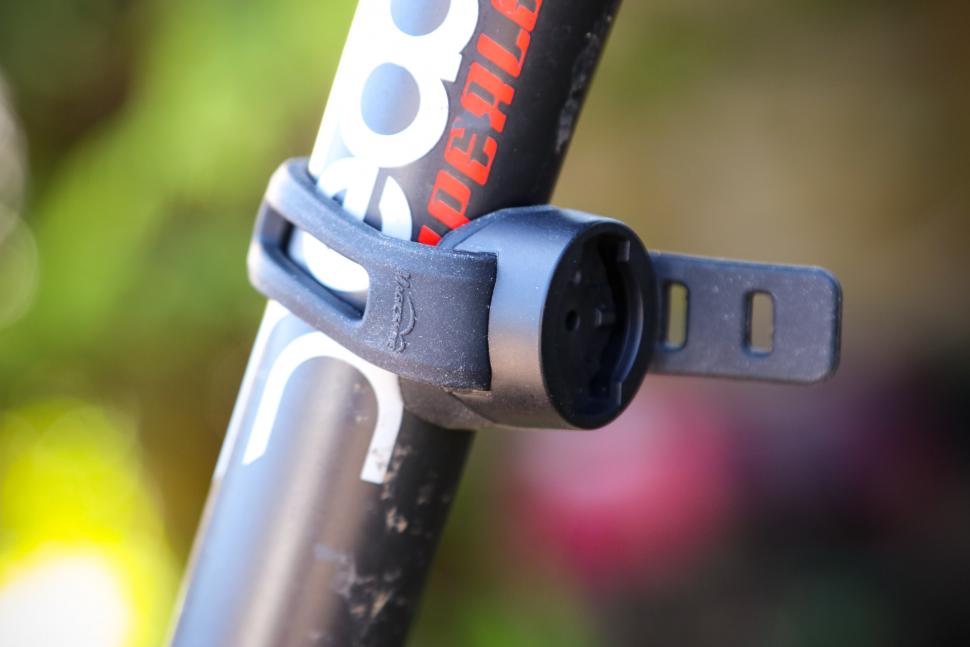 This is a simple, top mounted rubberised affair. It's fairly positive, and requires a two second press to power up and a double click to switch modes – the likelihood of unwanted changes is pretty remote. It's easy in gloves, and the unit remembers your last mode and restarts there, which is good.

Magicshine claims it's visible to 3,000m. I can't honestly attest to that – that's nearly two miles – but it is genuinely very bright, even on the brightest days. Friends reckon they can pick me out from half a mile or so, and even chainstay mounted, that tracing light puts you in the spotlight.

I haven't honestly dared push the SeeMee 200 to its theoretical 50hr maximum burn, but I've crept past thirty with no issues and – given how accurate the run times are in the heavier modes (within a few minutes over 3-4 hours), it seems likely to be trustworthy.

Add the 200 lumen braking function to its 140L steady mode, though, and the run time drops hugely. First time round, I was surprised to see the fuel light turn red after 90 minutes, though it managed another 70 minutes before kicking down to the 30 lumen flash and switching off the tracer lamp.

True to the claims, I got another 20 minutes before it completely shut down.

That incredibly bright (and power-sapping) brake light seems a little too sensitive, and it's easily triggered by small lumps or even swerves to avoid debris, as well as by actual braking.

The 70 lumen steady setting is arguably the best at night, while the low 30 lumens seems good, as opposed to painfully harsh, for group rides or stop-go traffic. Interactive offers the best nocturnal burn time at around 4hrs 30m.

There are a lot of lights at around £34, but few with this spec, which makes direct comparisons tricky. The Tern Vizzy rear light is another quirky design with a tracer lamp, but despite some nice touches it can't hold a proverbial candle to the SeeMee 200. It's a fair bit pricier at £44 too.

For less power but arguably better performance on long-distance commutes or winter training rides, Magicshine's own SeeMee 100 (review to come) is only £25.99 and also features a brake light.

The Magicshine SeeMee 200 is well made and has some neat, intelligent features for the money. While the brake light is oversensitive and drains the battery pretty hard, this is still a very usable, effective, and bright light for all kinds of riding.

Magicshine says: "Most powerful model in the Seemee bike tail light series, the Seemee 200 has a super bright main light and a secondary area light, providing optimal visibility for urban and road cyclists."

It's a clever and bright light with sensible modes, but the braking function is too sensitive and hurts run times.

* 200 lumens max main light, 140 lumens consistent, 260 degrees wide visibility from behind the rider, visible from more than 2 miles away

* 360 degrees visibility secondary area light, forming a circle of light under the rider

* Memory function: Saves the last mode used when the the light was turned off

Solidly made and well sealed from the elements.

Simple but versatile and reliable.

Good, provided you disengage the brake function, which is a recurrent theme across this family of lights.

Phenomenal output and presence, but mode choice and braking function can put a big dent in run times.

Solidly made, so no reason to believe it shouldn't live a long and productive life.

53g doesn't present an issue for me, and it's very solidly made.

Impressive given the performance and specification.

Solidly made, nice spread of modes and the trailer light.

Very favourably. There are a lot of lights at this price point, but few with this spec – which makes direct comparisons quite tricky. The Tern Vizzy is another quirky design with a tracer-type light, but despite some nice touches, it can't hold the proverbial candle to the SeeMee 200 and is a fair bit pricier too.

This is an innovative, well made light with sensible modes that cover most bases well. If the braking function wasn't so oversensitive it could be an eight – a reliable brake light and decent run times would be great – but as it is it's good and a seven.