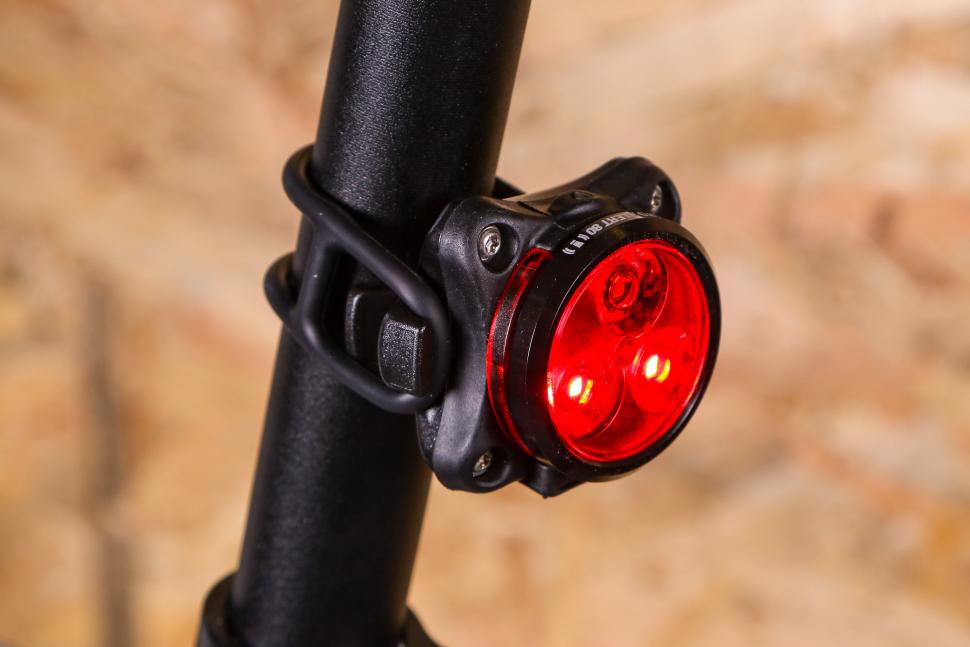 The Lezyne Zecto Alert Drive rear light is reasonably bright, with a new Alert function which is basically a brake light – it changes the light output depending on speed using accelerometers. It works well and is a small and neat package, though you might want to check whether it fits on your seatpost as it doesn't work with all aero/flat-back designs.

The Zecto Alert Drive puts out up to 80 lumens and has five settings – three flashing and two constant. The 80 lumens is only for the Daytime flash mode – the two other flashes are both 20 lumens, as is the brighter of the two constant modes, Blast, with the economy constant putting out just 5 lumens.

The new Alert feature uses accelerometers to alter the light output both when you're braking and when you stop. When decelerating, the light changes to a full constant that's brighter than the Blast setting, and when you stop moving it switches to a bright flash sequence which is different to and also more noticeable than even the 80-lumen Daytime flash setting.

It comes at an extra cost of £5 over the standard Zecto Drive, and I'd say it's worth it. Following drivers and riders confirmed that it worked – they noticed it changing modes – and particularly noted the stop function, which is very visible. You can see it in action in the video below.

Although the braking function worked when it should, such as coming into a sharp corner or a junction, at times it would activate when my speed reduced but I wasn't aiming to slow down – when I hit a steep climb, for example, or even, occasionally, when the speed seemed to be constant.

Also, as Stef noted in his review of the Lezyne Strip Alert Drive, while the change in output might be noticeable, how effective it is is hard to say, as many won't know what it's signalling. Then again, if it gets motorists' attention, maybe that means it's helping.

As far as the other settings are concerned, the Daytime flash is very good, giving a bright pulse of light that is visible from about 350 metres.

At night the Flash 1 setting is bright enough to be clearly visible to motorists from 350 metres, starting to fade from 450 metres. Flash 2 isn't really bright or visible enough for use on the road, and Eco is useful for cyclepaths where you don't want to be annoying others with too bright a light.

There is a small amount of sideways visibility, but the frame and style of the Zecto means almost all the output is pushed to the rear, with just a few small windows allowing light to exit sideways.

I tested the run-time of the shortest setting, Blast mode, and it surpassed the claim, running for 4 hours 50 minutes. Note, this was inside and stationary in a warm room without the Alert setting on. Given the Alert is a series of brighter flashes, it's going to reduce run-times if activated frequently, and cold winter weather might also affect battery life.

Lezyne doesn't provide a recharge time, but from empty to full via USB took just under 2.5hrs, turning solid green when fully charged. Given the fairly lengthy run-times and relative ease of charging, it shouldn't be a problem for most.

One thing to beware of though: the Zecto charges via a micro USB cable (provided) through a port found under a small rubber cap. I found it quite tricky to ensure it was fully closed, and almost impossible with gloves on. On several occasions I thought it was closed but later found it wasn't; given its location, right in the path of spray off the rear wheel, that can be an issue as water can get in.

Another potential issue is fitting the mount. The Zecto comes with a built-in clip and also an elastic strap. Fitting it to a round seatpost is really easy, with a good hook on the light to hold the elastic strap, and there is enough stretch to fit large diameter seatposts (or potentially other parts so long as they are circular).

Aero seatposts, though, or anything with a flat back, are a problem, and result in the light rotating and not pointing to the rear. Some lights come with an adaptor section to resolve this, and it'd be good to see Lezyne do similar.

The clip allows it to be mounted quickly and simply to saddle bag loops; you can even attach it to cables, although you're more likely to do that with the front version of the light. I used it on a saddle bag and the light didn't fall off, even over some rough off-road terrain, although I would still recommend using the rubber strap to provide a little extra security.

The Zecto Alert Drive isn't the only rear light with a braking function, but it's one of the cheaper options.

David tested Exposure's TraceR MK2 ReAKT last year and really liked it. It's £59.95, though, and only uses accelerometers for the braking function – it doesn't have the Lezyne's impressive 'stopped' mode.

In Stef's review of Lezyne's Strip Alert Drive, which costs the same as the Zecto on test, he referred to the See.Sense Icon 2, which also includes a braking mode along with a plethora of other features, but that costs £79.99. (We tested it on road.cc as part of a set, earlier in the year.)

If you were to compare the Zecto with non-braking tech lights, the choice is wider, but to be fair you'd also be looking at a light that costs £35 not £40. You can still find better value, though: the excellent Giant Recon TL 100 which Simon tested last year is still £24.99 and offers a higher claimed output.

Overall, the Alert feature of this Zecto is key to its performance, and I think it's worth the extra £5 over the standard light for the extra functions. The bright daytime flash is good, too, as are the run-times. The only slight issues are that the rubber USB cover is fiddly to close, and the mount won't fit on all aero seatposts.

Lezyne says: "The Zecto Alert Drive is a compact, innovative rear LED bike light featuring a Daytime Flash mode and our custom programmed 'Alert' technology. When decelerating, the light will turn solid like a brake light and then provide a distinct flash pattern once stopped to alert riders or vehicles from behind."

The USB cover is fiddly but the switch is easy to press, even in winter gloves. Side visibility is a bit limited, and it only fits well on circular posts.

With a round seatpost it's great as the strap is strong and very flexible, but can slide around on aero posts. Also clips onto bag loops etc.

Assuming you make sure the USB cover is completely sealed, it's good.

Matches the claimed run-times, and proves easy and quick to recharge.

Keep the fiddly USB cover shut and it should be fine – water ingress can cause issues if you don't.

It's compact and quite light.

Good value compared with other rear lights with braking tech. The Exposure TraceR MK2 ReAKT will set you back £59.95; the See.Sense Icon 2 is £79.99.

The clip for attaching it to a saddle bag.

Did you enjoy using the light? Sometimes

It's good overall: the Alert function works well, the daytime flash is powerful, and overall run-times are very good, sufficient for most riders I would say. There are some niggles that stop it scoring more, though: the USB cover is frustrating to use, the mount won't fit on aero seatposts with flat rears, and side visibility could be better.

I usually ride:   My best bike is: Cannondale SystemSix