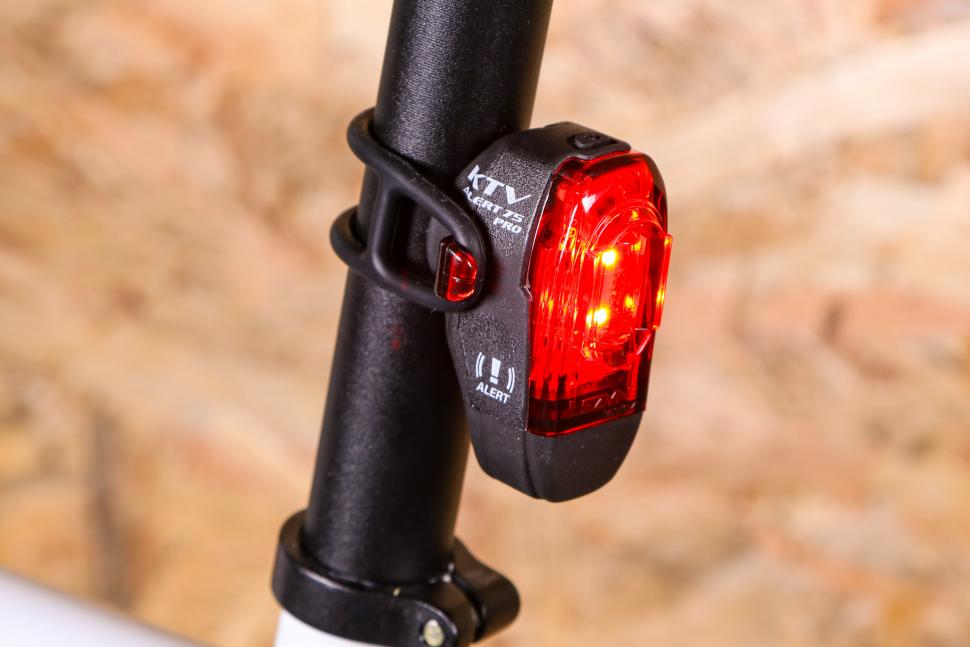 The Lezyne KTV Pro Alert Drive is a neat and compact rechargeable rear light with an Alert function that works like a brake light, using accelerometers that change the light output when you are slowing down, and again when you are stopped. Generally it works well, with a simple but very good tool-free mount, but run-times don't quite match those quoted, and daytime visibility isn't as good as some.

The KTV Alert puts out a maximum 75 lumens and has five modes – three flashing (including daylight) and two constant – plus the Alert, which is always on.

The Alert feature functions like that on the Lezyne Zecto I've also been testing: accelerometers detect when you are slowing down or braking and change the output to a brighter constant light; when you come to a stop it changes again to give out a series of flashes that are brighter than any of the standard flashing modes, and in a different sequence.

It comes at a £5 premium over the non-Alert KTV, and unless you have circumstances where its settings might be frowned upon – perhaps regular group rides (you can't switch this function off, as you can with the Zecto) – I think the extra cost is worthwhile as it does seem to be noticeable.

Following drivers and riders confirmed that it worked – they noticed it changing modes – and particularly noted the stop function, which is very visible. You can see it in action in the video below.

As with the Zecto, although the Alert function worked as expected and activated at all times when slowing down, this did also include times when I was slowing but not actually braking, such as the beginning of a steep slope. It also occasionally came on while riding at a constant speed – seemingly when rolling over a hump in the road.

Also, as I mentioned in the Zecto review, while the change in output might be noticeable, how effective it is is hard to say, as many won't know what it's signalling. Then again, if it gets motorists' attention that can only be a good thing.

The headline 75 lumens is only for a single setting, the daytime flash, and doesn't strike me as being bright enough. It's not as bright as some we've tested on road.cc, including the Zecto Alert, and while it is visible – in clear daylight up to around 300 metres away – it lacks any real punch to help it stand out.

Likewise, at 25 lumens the high constant mode, Blast, isn't as powerful as the Zecto's, but at night it's bright enough and clearly visible.

The lowest constant setting, economy, is just 5 lumens, which I think is too dim to be used on any public road, day or night, though it might be of use on a path or trail where there is no motor traffic. The more powerful constant setting is bright, but not dazzling at night.

Of the flashing modes, both 30 lumens, the 'standard' Flash is useful and bright enough, visible beyond 300 metres, with a long quoted run-time of 10hrs 30mins. The other, Strobe, has a shorter run-time and is less punchy, and doesn't strike me as being as useful.

The style of light and casing gives a very broad angle of view from behind, and the quoted 270-degree wide angle visibility seems about right.

I tested the run-time of the Blast mode several times and unfortunately it fell short on each occasion, lasting between 3hrs 45mins and 4hrs 10mins. Note that this was inside in the warm and stationary, so the Alert setting wasn't being activated at all; given the bright flashes that produces, it will undoubtedly reduce run-times if activated frequently (as Stef found with the Lezyne Strip Alert Drive), and cold winter weather might also affect battery life.

Lezyne doesn't provide a recharge time, but from empty it was showing as solid green to indicate fully charged in just under 2 hours, which is very good given the run-times, and makes recharging at work easy if you commute (in normal times).

Charging is via the KTV's USB connector, hidden under a rubber cap. It plugs directly into a computer or wall socket, which is quick, easy and convenient, although personally I prefer using a cable attached to a plug.

The major drawback for me is that the rubber cap comes off completely and might be easy to lose. It would be handy if Lezyne could add just a small loop onto both with some sort of tie connecting them, to ensure they stay together while charging.

On the plus side, it's easy to see whether the rubber cap is correctly in place, to ensure the light is protected from water ingress.

The KTV is likely to be attached to a seatpost on most bikes, and the stretch within the rubber strap provided is excellent for the job. It's robust and will stretch around even the deepest aero posts.

It even comes with a small adapter that flattens the mount further, for seatposts with a wider flat section. I think this is a really nice design feature, and one area where the brighter Zecto Alert is lacking.

It held the light stable, both on and off-road; I would have complete confidence in the light and its USB cover staying in place.

Looking at his thoughts on both the 180 and 200, the lights themselves are good, but the braking function is less impressive than the Lezyne's.

> Buyer's Guide: xx of the best rear lights for cycling

Higher up the tree, Exposure's TraceR ReAKT, which David tested and rated highly, is double the price of the KTV at £59.99 – and only has the braking function not the stop mode the Lezyne Alert lights have.

If you're not bothered about the Alert feature there are brighter lights available for less, such as Giant's excellent Recon TL 100 for £25 and the Recon TL 200 (£35), both of which impressed the riders testing them.

Overall, the KTV is a bit of a mixed bag. The Alert function works well and I think is worth the extra £5 over the standard light, it performs well at night with good wide visibility, and it'll fit all seatpost styles. However, the daytime flash isn't as bright as some, and it didn't hit the claimed run-times by a fair amount, which is something to be aware of when using.

Lezyne says: 'Compact, aero-post compatible rear bike light featuring a Daytime Flash mode and our custom programmed 'Alert' technology. It's equipped with our Wide Angle Optics lens that provides up to 270° of visibility and two high powered LEDs. When decelerating, the light will turn solid like a brake light and then provide a distinct flash pattern once stopped to alert riders or vehicles from behind. The light will then change back to its previous output mode once the rider resumes his or her ride. Its co-molded construction is super light, yet durable and has an IPX7 waterproof rating. The KTV Pro Alert Drive provides up to 75 lumens (Daytime Flash) and five output/flash modes. And it features an integrated USB stick for convenient cable-free recharging and offers up to 14 hours of runtime.'

Solid and robust with no issues.

Button to switch on is easy to find and it's easy to switch between modes.

Great clamp, suitable for round and non-round seatposts, with plenty of stretch in the rubber band to fit the deepest aero designs.

As long as the rubber bung is always attached correctly, the light should stand up to rain or heavy water spray.

Decent, but not what Lezyne claims.

Good at night and good wide angle visibility, but daytime flash isn't that bright, and Economy mode is also very dim and of little use on the road.

Well made and should last, though there's potential to lose the rubber cap.

Pretty light and compact. Good output for the size and weight.

There are similar and more powerful lights available for less, but also many that are more expensive. The Alert function is good, if not as bright as the Zecto's, and I'd say is worth the extra £5 over the standard KTV light.

It performs well at night, with good wide angle visibility, but the daytime flash could be brighter. The Alert function works well.

Easy and very quick to mount. I like the USB attachment and prefer it to a micro-USB style.

Daytime flash not that bright. Run-time less than claimed.

Magicshine's Seemee collection ranges from £24.99 to £33.99 and features brake light tech, although this isn't a highlight of the design according to our tester Shaun's findings. The Exposure TraceR ReAKT is very good but also twice the price.

Did you enjoy using the light? It was OK.

Would you recommend the light to a friend? Probably not.

It's compact, functional and easy to mount, but it doesn't hit the claimed run-time and the daytime flash isn't as bright as some at a similar price.

I usually ride:   My best bike is: Cannondale SystemSix