The Xeccon Mars 30 rear light has generally build and better presence than the numbers would imply. However, the bracket, though not beyond redemption, needs redesigning.

Inside the big clear ABS plastic dome (which reminded me of a Portuguese man 'o war, without the tentacles) sit 30 'chip on board' LEDs.

Sitting them directly on the PCB means more can be crammed into the same space, thus providing greater visual punch, compared with more traditional models of similar output.

They are fuelled by a 300mAh lithium ion cell, which is reckoned good for 300 charge cycles. It charges via the usual Android phone type micro-USB cable. Refuelling takes a relatively pedestrian four hours but on the flip side, the flashing mode is very gentle on the battery.

The 'smart' element lies in the unit's ability to switch to a 30-lumen constant mode, theoretically to denote braking.

Given brake lights aren't standard on bicycles, there's little to suggest drivers recognise this particular signal but it seems intense enough to keep them at a comfortable distance.

The main unit feels very solid, more so than typical of this price point. The USB port is positioned out of harm's way and the plug fits very securely. Although Xeccon don't cite an IPX rating, I've had no problems, despite some pretty heavy downpours. Cursory blasts from my garden hose haven't revealed any obvious weaknesses either.

This is a sensibly proportioned side mounted affair, intuitive to use and locate even wearing full-finger, winter-weight gloves. A two-second press brings it to life and subsequent, single nudges cruise through the modes. Debate rages but for the most part, three covers the basics competently. In this instance we're talking steady, flashing and daylight-braking only, by another name.

Powering down also requires a constant, two second press. This and the relatively positive feel means unwanted, bottom of the bag engagements will be rare events. It doesn't remember the mode you were using last, but that's a convenience rather than something I'd get excited about, given there are just three modes. The high, flashing and daylight modes put out 20, 10 and 30 lumens respectively. 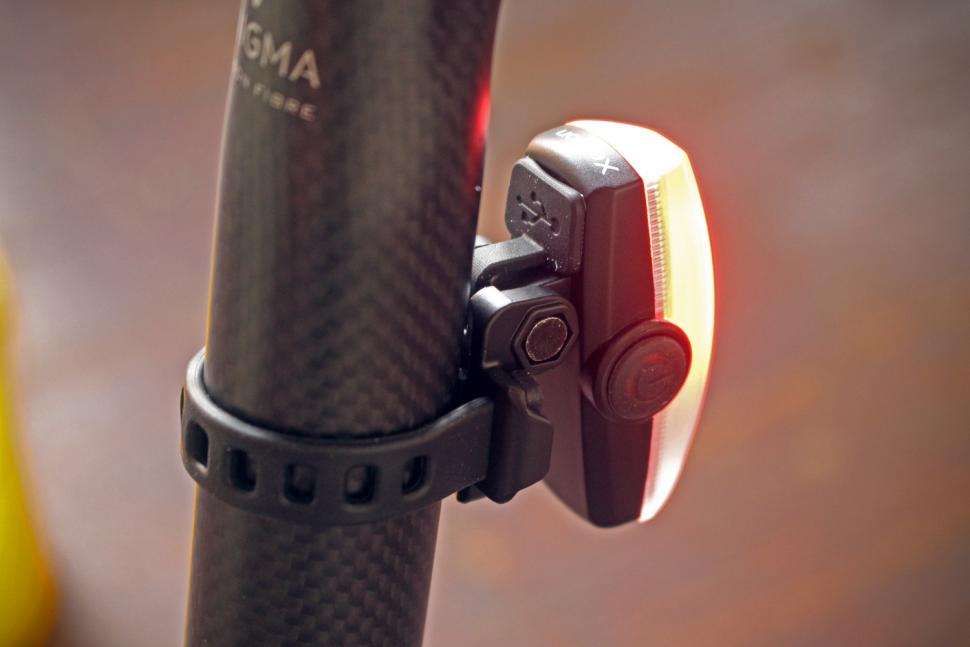 This is a hybrid of hinged and watch strap and very disappointing, since I was never able to get the knurled plastic pin wound tight enough. This meant, over the course of an hour's riding, the light would be misaligned, often projecting upward beneath the saddle, rather than at driver eye-line.

There is scope for seat stay mounting and this seems to cure the problem. I moved ours below the cantilever posts on my fixed gear bike, which largely overcame its appetite for misalignment. Nonetheless, it's hardly going to enjoy universal appeal, since most of us like the option of post mounting.

The highest, steady setting is good and projects a decent 180 degree cloak of light. Generally speaking 30 lumens is my benchmark for lonely lanes and faster backroads but this is mitigated by the braking function, which boosts output when you slow slightly.

Assuming of course, the hinged bracket hasn't done its rotational trick, the high mode seems to register around the 175 metre mark, dipping to around 125 in town because of competing illumination. Again, the braking mode certainly helps, say when approaching roundabouts, but if I'm intentionally heading that way, flashing is that bit better, thus my default.

Allowing for the auto engagement setting, in flashing mode I've had a good 12 hours from a full charge. Visibility is to 175 metres on a clear night, 125 in suburban contexts. The steady mode is reckoned good for three hours. The highest, steady setting has returned 2hrs 43min. Either way, there's some visual warning when reserves drop to 15%.

The 'intelligent' braking is useful to a point. While it's bright, relative to specification, it's not what we've come to expect of a daylight mode. There's a pause of a second or two before it registers change of pace and disengages. However, the increased presence when breaking on a wet, overcast day is definitely a bonus.

The Mars 30 is a pretty good light for the money but scuppered by a silly bracket. Despite some lovely touches, I would be hard pressed to recommend it over a less powerful unit such as CatEye Rapid Micro rear, which on paper offers less bang for your buck. However, the CatEye is more potent than 30 lumens suggests and the simple O-ring bracket means it will stay where you need it.

"With the innovative functions and features of smart brake indicating system, smart off system and smart day riding mode, will our Mars 30 the smartest taillight which make your riding no matter day or night fashion and safe.

"Smart Brake Indicating System (SBIS): Regardless of any mode being riding on, SBIS will be activated once you brake, and this Mars 30 will turn to an ultra bright mode to alert others behind.

"Smart OFF System: Light will turn off automatically after 5 minutes of inactivity.

"Smart Day Riding Mode: Man can ride under this Day riding mode at daylight, as it wouldn't turn on when riding, once you brake, the SBIS will work like under other modes. This wouldn't disturb others when riding, but can make you safe once you brake".

Bracket aside, generally well made.

Very straightforward but this is somewhat frustrated by the bracket.

Bracket is very flawed-tends to slowly pivot upwards over the course of a ride, illuminating the underside of saddles/wedge packs when post mounted.

No IPX rating but no problems to date, despite some pretty heavy showers and general exposure to wet, mucky stuff.

Not bad, relative to the numbers and if you've got the bracket behaving.

Light seems well sealed but marred by the bracket.

Potentially very good but loses a point due to the swivelling bracket.

Overall, the Mars 30 has potential. I'm not completely convinced by the brake function but the increased intensity is welcomed, especially in stop/go traffic. Three modes is pretty much all we really need and all offer decent presence. However, the bracket's design is a particularly strange choice given its bigger sibling seems to use a sturdy rubberised watch-strap type.

Would you consider buying the light? Yes, -but only with an improved bracket.

Would you recommend the light to a friend? Not in its present guise

A potentially great little budget light, spoilt by a poorly designed bracket. I have managed to overcome some of the problems by mounting it uner my fixed gear bike's unused cantilever bosses.