The Incite X6 USB To See Front is part of Kryptonite's new smart light range. Its seven modes include an auto brightness-adjust mode, and there's a handy data display to keep track of the battery. Kryptonite says that with its 60 lux and precise beam pattern it's enough for riding in almost any conditions. Unfortunately, I did not find that to be the case.

There are three steady modes: low, which lasts 15 hours, medium (6 hours) and high beam (3 hours). There's an on-off pulse mode and a low-high pulse mode, both good for 20 hours, and an economy pulse mode that does 30 hours. And finally there's the auto-adjust brightness mode; how long you get there depends on the lighting conditions.

There's a single button on top of the light to cycle through all seven modes, and four small red LEDs to show you which mode you're in.

I'll admit I didn't noticed the correlation between the LEDs and the mode until I sat down to write this review... I just cycle through until I found one that throws out the kind of light I want. I might use those LEDs a bit more now I know what they mean.

A more useful feature is the data display. It shows you how much time you have left before it goes into emergency mode, which is the economy flash mode. 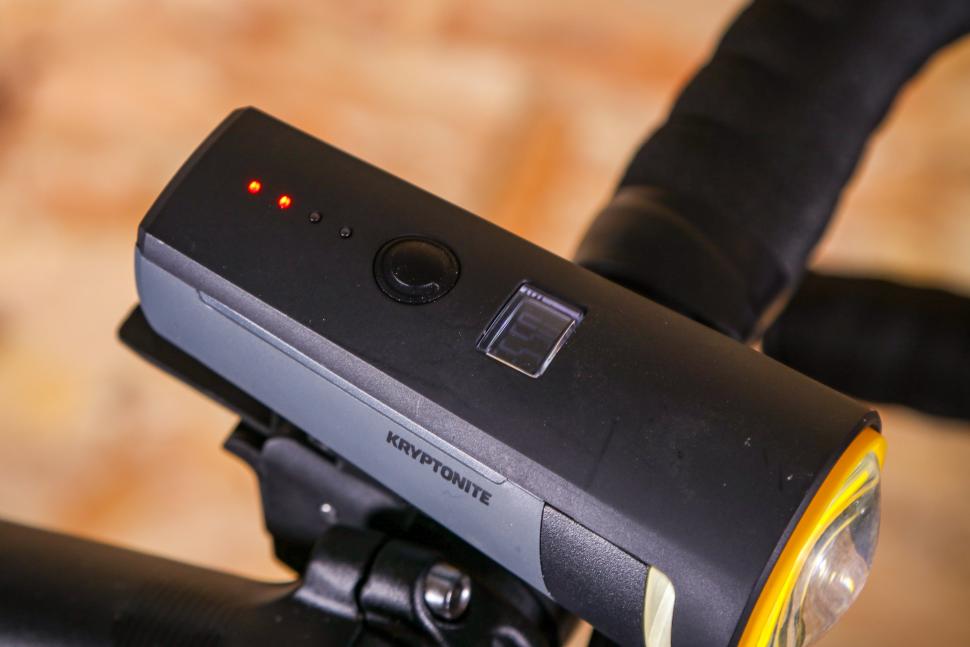 To test how much you can trust this, I started a timer and switched the freshly-charged light on high steady. The display on the light just stopped counting down after three hours – as advertised, but the light carried on for another two hours before going into limp mode.

This was in ideal circumstances, indoors at room temperature. I'd much prefer a light overdelivered like this to conking out earlier than expected.

It's clear from this experiment that the countdown timer is just that. It knows what mode you're in, it knows how long that should last, and it counts down from there. It looks like it uses some calculation to adjust how long it's been on for the different modes.

It would be better if it adjusted itself according to the actual battery level, but I still found this useful.

I couldn't find a published lumen figure for this light, which makes it hard to compare with other lights we've reviewed. Still, Kryptonite does state that: 'With the lux level of 60, the Incite X6 is bright enough to light your way in almost any conditions.'

Unfortunately, I have to disagree. It will get you home in an emergency, but this light is simply not powerful enough to enjoy a ride in complete darkness (as you can see above with our beam comparison engine).

As a 'be seen' light however, the Kryptonite Incite X6 comes into its own, and you get at least 20 hours of run-time in any of the pulse modes.

While the button is not illuminated, it's still pretty easy to find even in big gloves, so long as you know to feel between the display and the red LEDs. Transparent areas in the housing to the side of the lens throw out plenty of light to make you visible from the side. 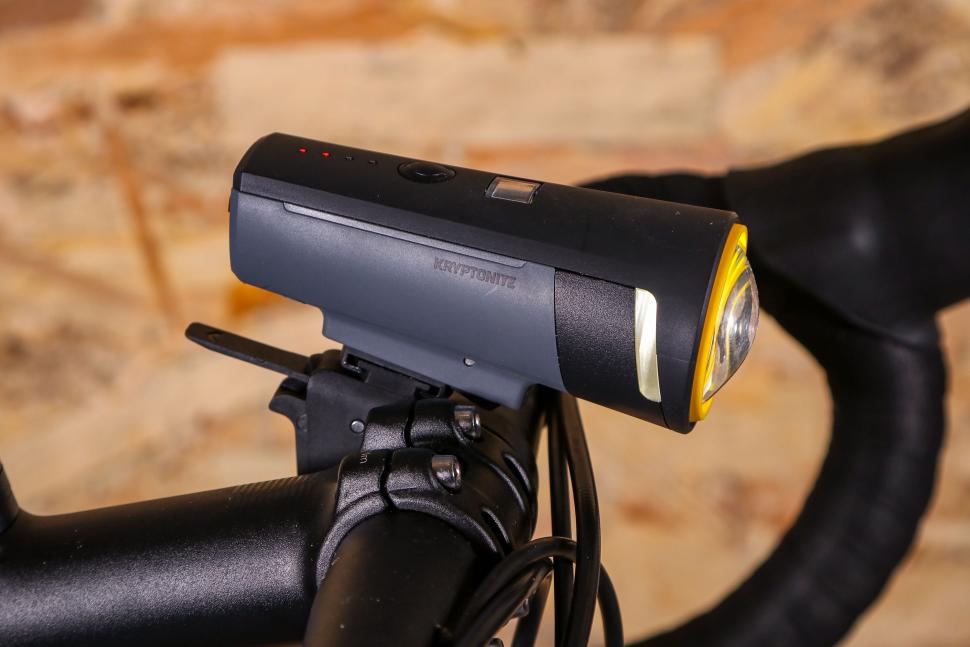 Charging is via micro-USB cable and takes about four hours from flat on a 2A supply. The display comes in handy again: it shows you the charge level as a percentage. The charging port is on the back of the light, and protected from the elements with a rubber bung. 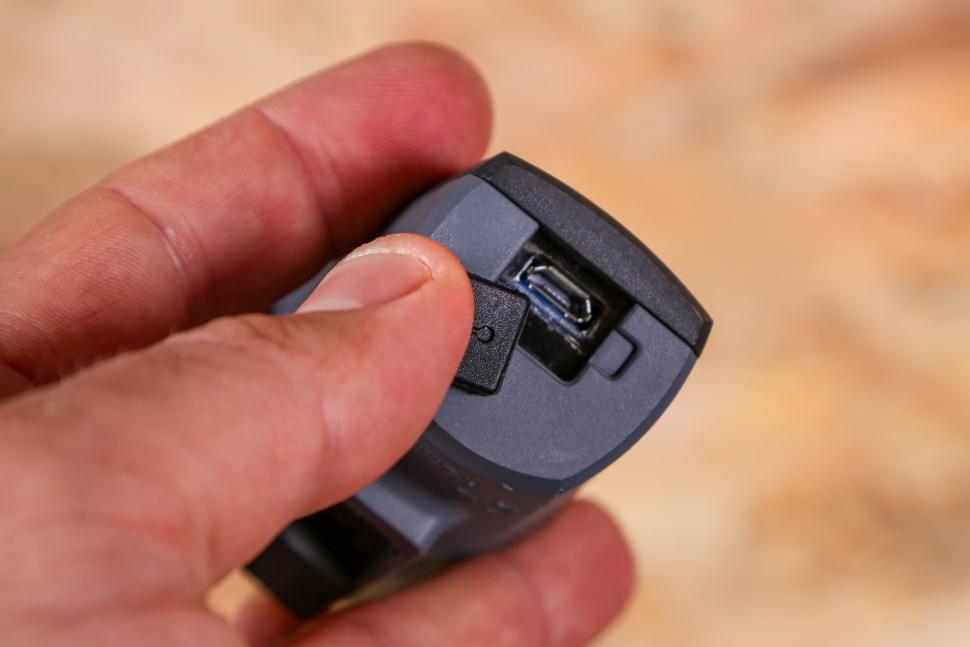 The clamp is quite nifty: it has a ratchet you cinch up tight, and then a cam lever to flip – a bit like a wheel quick release – to stop it going anywhere. The light attachment to the clamp has a nice action to it and feels solid.

The clamp allows the light to rotate 180 degrees horizontally, with a 2mm hex bolt to adjust how easily it spins. This mechanism isn't quite up to the job. 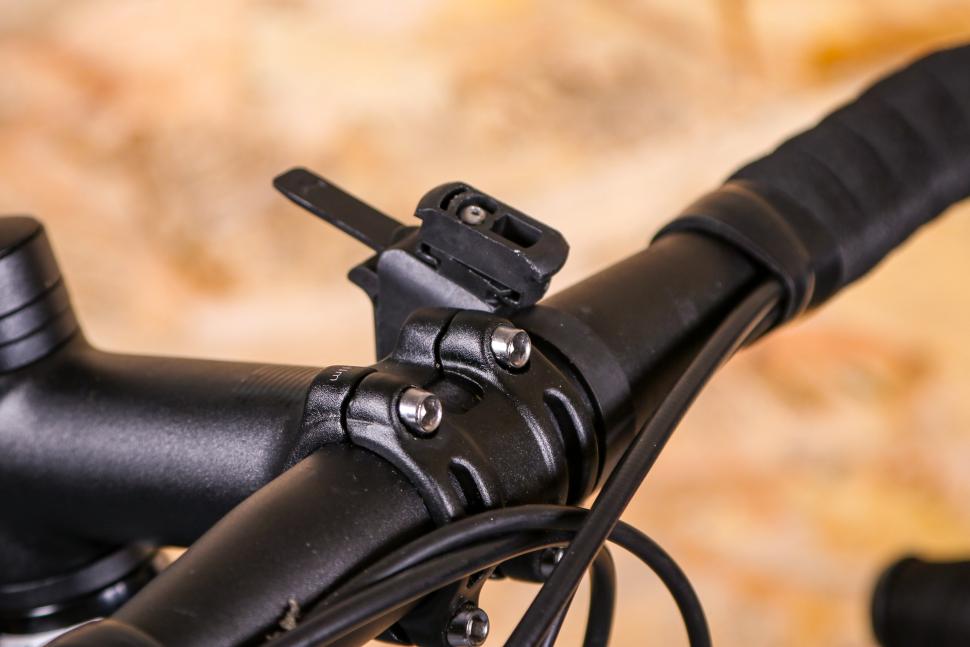 On rough surfaces the light wanders enough to need regular adjustment, even with the bolt done as I tightly as I dare. This is hardly ideal for a 'be seen' light, and downright dangerous for a 'see' light.

At £64.99, the Incite X6 is expensive for a 'be seen' light. There are options out there that do this job for less, such as the Lezyne Hecto Drive 500XL and the Vel 500 Lumen, which both cost £40, though neither of these offer such long run-times.

If you're looking to for a safety light for your commute – one you can charge once a week and forget about otherwise – this one might be worth looking at, assuming you can put up with the horizontal adjustment niggle. If you're after headlamp to actually light your way under dark skies, though, this will disappoint.

Not bright enough for riding on unlit roads, but a decent – if expensive – light for being seen

"The Incite series is our new smart light range with high quality optics that result in improved lighting and more precise beam patterns. Incite lights are based on lux rather than lumen measurement, more commonly used in the U.S.

Lux is the total amount of light that falls on an area or surface, rather than a general amount of light that's emitted. With cycling, Lux is such an important factor because we're looking to focus the light and the beam pattern, this makes sure the light goes where you need it to and not where you don't want it to go, like blinding oncoming motorists and other riders.

With the lux level of 60, the incite X6 is bright enough to light your way in almost any conditions.

The X6 has some really great safety features including auto adjust brightness mode which lets the light automatically adjust its output based on ambient light around it, illuminated side ports for increased visibility to peripheral traffic, get home safe mode where the light switches to the lowest output, economy flash mode when the batteries below 10%.

This light is fully USB rechargeable and depending on the mode it has a battery life ranging from three to thirty hours.

It features a display that shows the remaining battery runtime and the battery symbol that flashes when the battery capacity is below 20%.

It features a compact durable case and a hassle free mounting port that attaches to an easy to install included bracket."

Side lighting for INCREASED VISIBILITY AND SAFETY

The light has seven different modes of operation, you just cycle through them with the button. It remembers the last one you used. The button is not illuminated, but it's easy to find.

The clamp works fine; I really like how the unit attaches to the mount. However, the light moves side to side on bumpy roads and descents.

Rate the light for performance:
3/10

In its video, Kryptonite says: "With the lux level of 60, the incite X6 is bright enough to light your way in almost any conditions." I really didn't find this to be the case. On dark lanes there isn't enough light to ride at anywhere near normal speeds.

At this price there are lights that perform much better for lighting your way, and cheaper lights that work just as well for getting you seen. However, this one does the 'being seen' bit for longer than those cheaper lights.

I expected this light to 'light my way' on dark lanes, and it doesn't. As a commuter light on partly lit roads it's fine for getting you noticed.

Good flash modes, the side lights are bright and the battery display is reassuring.

The beam pattern and brightness are not up to cycling on unlit roads.

Did you enjoy using the light? Yes, for being seen.

Would you recommend the light to a friend? Probably not.

The light works well for being seen, but based on what Kryptonite says, I expected it to work well for riding in complete darkness. It is not bright enough for those conditions, and it's an expensive way to get a 'be seen' light. Combined with the horizontal adjustment niggle, the Incite is sadly a below average proposition, and a four.

I usually ride: All of them!  My best bike is: Ribble Endurance SL disc