Giant's Recon HL 1800 is a solid improvement over its very good HL 1600 predecessor. With easier usability and some improved features that include a 200-lumen power bump, a more compact size and some Garmin head unit integration, PLUS decent value, this could be one of the front lights of the season.

A couple of years ago, we reviewed the Giant Recon HL 1600 and found that it was a very impressive front light. While it had a few shortcomings, overall it was a great value unit with a serious amount of power.

Now, Giant appears to have improved on it by a fair chunk – I think making it one of the best front lights on the market today.

There are five modes with the HL 1800 – low (450lm), medium (900lm) and high (1800lm) static settings, a 100-lumen flash mode, and a simplified version of Giant's smart mode. Before, it could adapt to the speed you travelled at if it was paired to an ANT+ speed sensor – Giant called this 'RideSense' – but now it just uses an integrated ambient light sensor to decide whether it selects the 900-lumen medium mode for darker conditions or, during the day, a 450-lumen constant or 100-lumen flash.

Why Giant decided to drop the RideSense ability isn't totally clear, but I don't think the light loses much for it. Simplicity is often best, and in this case Giant isn't relying upon someone to have a third-party speed sensor for it to talk to. What matters most is the level of light you're riding in, and it switches over when it needs to just fine.

The 1,800-lumen setting is properly bright, as you might expect – which will be great for mountain biking as well as the road riding I do – but as the beam comparison tool shows, it is more focused with a rounder beam than the HL 1600, and with less light bleed too. This is mainly down to the slimmer dimensions of the HL 1800, but frankly it's not a bad trade-off at all – there's more than enough peripheral light from the dual LEDs to make objects that aren't directly in your line of sight visible, and the focus area of the beam is obviously incredibly strong.

> Buyer’s Guide: The best front lights for cycling & how to choose

Battery life is impressive too. While the HL 1800 has a battery management system on board that powers it down a little when the unit gets too hot (like the HL 1600, it will burn you if you inadvertently grip it for longer than a second), you will get more than the claimed 1hr 30mins on the brightest setting. A full run-down of the battery brought just shy of 2 hours of run-time – the coloured indicator around the single function button flashed red to indicate 20% battery after 1hr 40mins. While battery tech continues to improve year on year, that's impressive given that the dimensions have decreased.

Speaking of the button, Giant has opted for a more user-friendly click button as opposed to the touch interface that the HL 1600 had, and it's a marked improvement, especially if you have gloves on and want a tactile response from it to know that you've pressed it effectively. On the move, that's valuable! 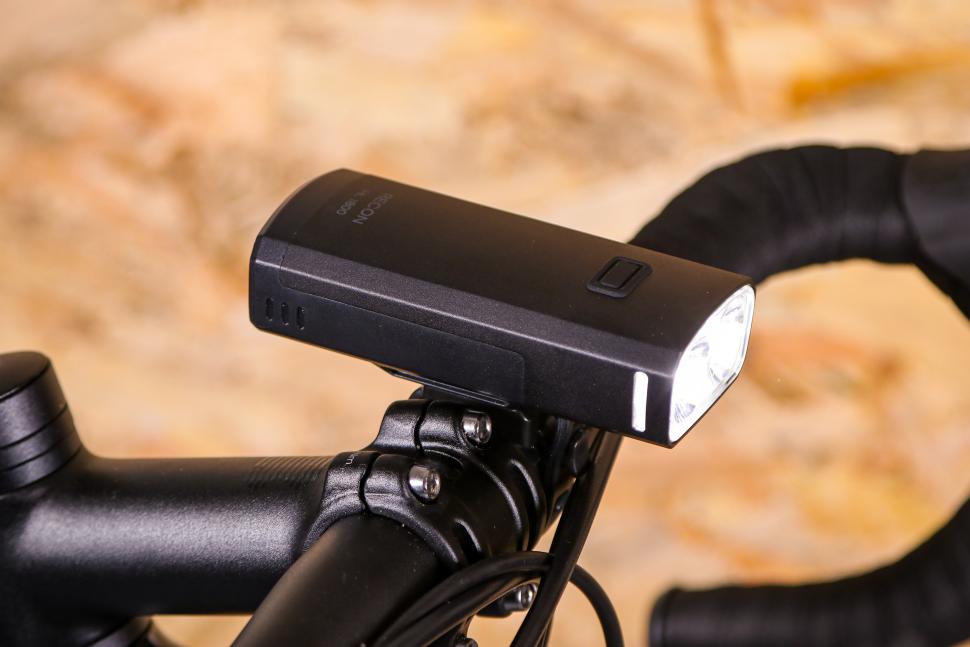 As I've already mentioned, the dimensions have shrunk too, with a markedly slimmer profile when it comes to height. This means it sits less proud on the handlebar, which is also helped by a slimmed-down bracket. It's a simple affair, and while the clip that the light slides onto looks a touch flimsy at first glance, it's proven to be effective and secure in testing. 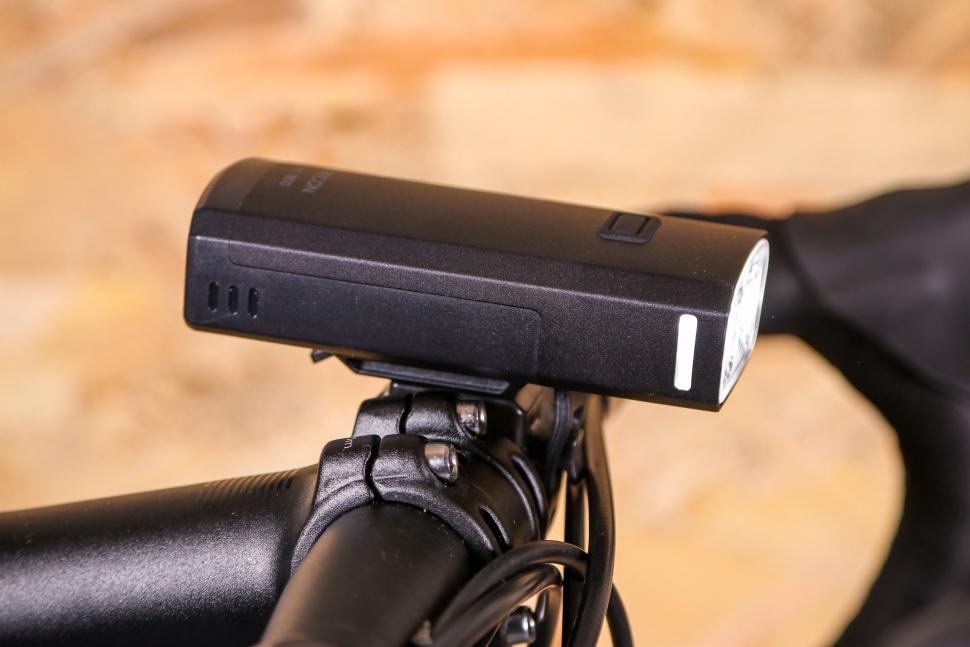 You also get a GoPro fitting, so if you happen to have a combo mount, you can attach it below your computer/GPS unit, which takes it practically out of sight for that clean aesthetic. Sure, you can't see the power indicator, but then that doesn't matter if you run a recent Garmin Edge (I have a 520 Plus) and pair it.

That's right – unlike the HL 1600, the HL 1800 will pair to Garmin head units via ANT+ to display battery life and the current mode. Although (slightly amusingly, depending on who you are) Garmin doesn't recommend using this functionality, I can report that it does work at face value – even though Giant doesn't provide any instructions on how to pair it, so you have to use your intuition somewhat.

It's not a perfect setup – the light effectively becomes a slave to the Garmin but doesn't offer full functionality. The Garmin takes over switching the light on and off, but you can't easily switch modes using it (you need to dive into menus to do that, which is tricky on the move. If you want to know how I did it, see below).

Overall, the improvements and tweaks add up to a really strongly performing light. In its mainly aluminium shelled frame, build quality is good enough (for me, Exposure and Lezyne lights that feature almost 100% alloy bodies continue to rule that area), and the micro USB recharge port seems well sealed by the rubber cap.

It's a bit of a shame that the price has hiked by £20, but it's not totally unexpected. To put that into context, its rivals include Lezyne's Super Drive 1600XXL (£120) and Magicshine's ALLTY 1500 (£90) and ALLTY 2000 (£129.99) models. Neither of the Magicshines really managed to wow us, though the 1500 achieved an 8/10 rating, but the Lezyne is certainly a close rival: with a wider but less focused beam, it too features strong run-times and impressed Jamie with its quality feel.

If you're after a single unit/compact front light that can handle the darkest of conditions and impress in practically every measure that matters, it's hard to see past the Giant Recon HL1800. The Lezyne 1600XXL is a strong rival, but is it better than the HL1800 and the sum of its impressive parts? Unlikely.

You need to pair the light first like you would any other sensor, which creates a 'light network', and then configure a data page or field if you want one on your chosen profile. You don't need one though – you can see a five-point battery indicator on the Garmin's sub menu – and in the light network settings you can select how it powers on (either by turning your Garmin on or by starting a ride) and what mode you want to run it in.

In essence, you lose the ability to control the light manually from its power button, so I chose to run it in 'individual' mode, activating when I started a ride and switching off when I ended it. This gave me control over the brightness setting when the head unit was on.

With its published advice, Garmin might simply be covering itself in case any faults were to develop with either device, but it is indicative that the link might not be bulletproof or fully approved by Garmin's third party policy. To be safe, given that my personal 520 Plus was on the line, I chose to remove the connection once I had established that it worked, given that I consider it more of a 'nice to have' than an essential function.

Giant headlines with the line: 'Aside from outstanding lumen capacity and industry-leading usage time, the Recon HL1800 monitors ambient light to change output accordingly, helping to save battery power for when you need it. Shines brighter, runs longer and works smarter.'

There are plastic elements to it, but the mainly aluminium body is plain but high quality.

On its own, the HL 1800 is an improvement on the HL 1600 predecessor. Connected to a Garmin, it's not perfect, but once you get used to it, easy enough.

The clip seems a little low-rent, but I can't deny that it works pretty brilliantly. Kudos for the supplied GoPro fitting too.

No complaints here. The seals are tight and the cover port for the charger fits nice and snugly. Only issue for me is that it's on the underside of the body, so is slightly more exposed to spray (arguably).

Battery life and recharging is long and fast enough respectively. Giant even appears to have underplayed its longevity on a single charge too.

Some may prefer a more floodlit beam profile (a beam that bleeds outward a little more steadily, like Lezyne's Super Drive 1600XXL) but frankly, 1,800 lumens of brute force is the real headline grabber here.

The body seems really well built, and the rubber micro USB cover even has a strong tether to ensure you don't lose it over time.

Anything under 200g for a light producing this performance is seriously impressive in my eyes. Even Lezyne's excellent Super Drive rival is 40g heavier.

It's not quite as good value as its forebear, but it's still pretty good – the same price as Lezyne's excellent Super Drive 1600XXL but with an extra 200 lumens to play with.

The Garmin connectivity isn't fully sorted out (it could do with being a little slicker), but I'm being picky. Oh, and I'd rather keep the additional £20 in my back pocket, but then who wouldn't?

Would you recommend the light to a friend? If they want big power from a single unit, almost unequivocally, yes.

Quite simply, this is one of the best single unit/compact front lights on the market today. 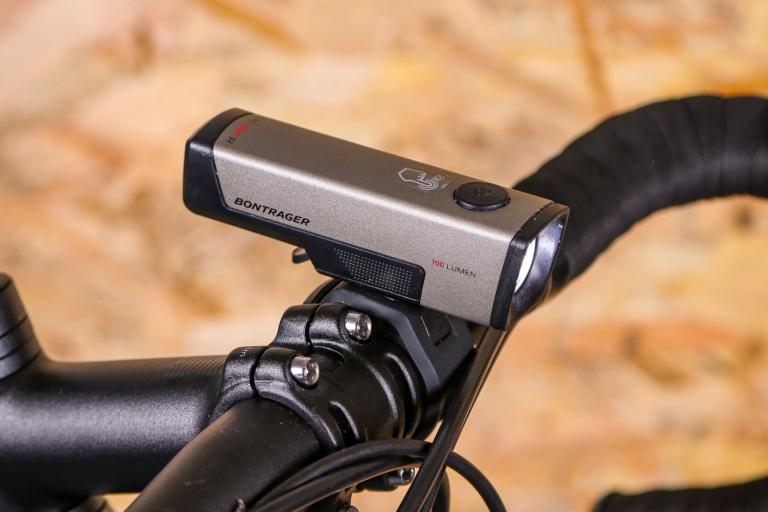 Decent quality front light for being seen, but beam pattern could be better and it's a bit pricey