The Lezyne Super Drive 1600XXL packs some impressive illumination power into a high-quality package that can be switched easily between bikes. That's useful as this is more than bright enough for travelling at high speed on unlit lanes or even venturing off-road. The Smart Connect feature allows for pairing with compatible Lezyne rear lights, and custom mode choices go some way to overcoming mode selection issues that could be irritating with some Lezyne lights. Lezyne hasn't forgotten the basics either: run-times and beam patterns are good, and considering the power it's not a bad price either.

Back in 2017 Dave tested the Super Drive 1500XXL, rating it highly. This 1600XXL seems the natural successor, adding 100 lumens to the max power, reducing the weight by nearly 30g and improving run-times.

However, my main grudge with Lezyne lights has always been the awkward mode selection. I've never found the Race Mode (where you switch between two settings, 'main' beam and 'dip' that's generally too low) to cut the mustard, which means you're left scrolling through all the modes (including flashing) trying to find the one you want. This new 1600XXL has exactly the same problem out the box, but unlike previous options is easily remedied with Lezyne's new 'Smart Connect' feature.

Smart Connect enables the light to be paired to an Apple or android smartphone. The process is simple – just turn on the light and download the LED Ally app. Once paired, the app allows custom programming of up to four modes, so you can choose which brightness/modes you want the top button to scroll through depending on personal preference and discipline.

Out of the box the 1600XXL comes with the following seven modes:

After a few rides I decided to cut these down using the app to just the Blast, Enduro, Pulse and Overdrive modes. For riding in full darkness I usually like around 800 lumens for travelling at any meaningful speed comfortably. True to this, I found the 600-lumen Enduro enough for 90 per cent of my time, with a few dark lanes and descents requiring the brighter 1,000-lumen Blast.

Realistically, for road riding I found the 1,600-lumen a bit excessive, and only found myself requiring it a couple of times over the last month. That said, it is a luxury on fast descents, and I did a few mountain bike rides where the extra light was more than welcome. 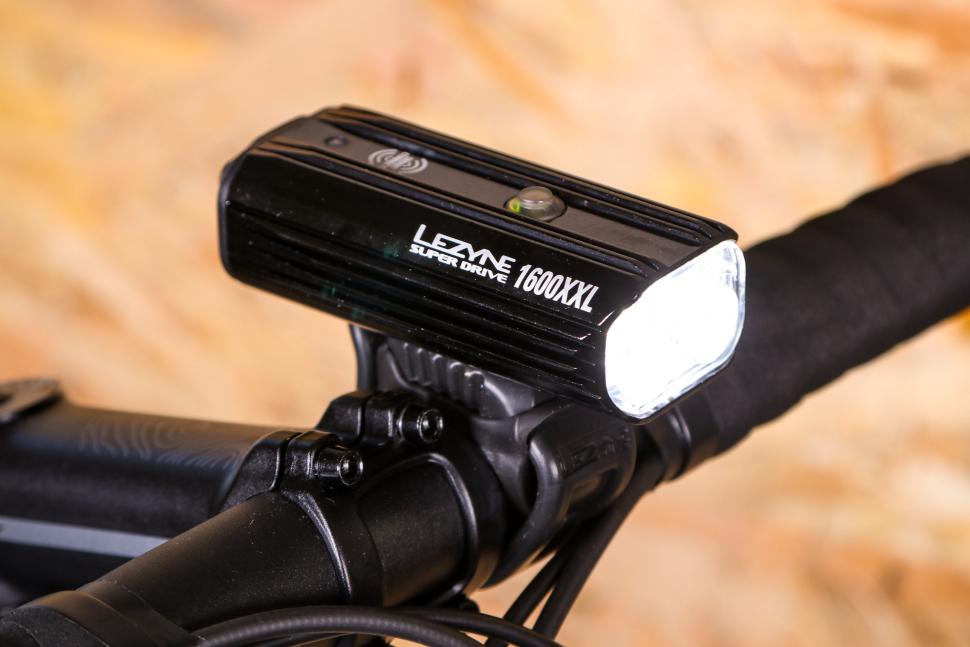 Throughout the testing period I found the claimed run-times to not only be extremely competitive but also accurate. I could easily manage a three-hour solo ride in complete darkness without even beginning to compromise on power. They're longer than the 1,600-lumen Ravemen that Stu tested last year, for example.

One small aspect that I'm disappointed hasn't been updated is the micro-USB. Although this is still by far the most common connection to use, some lights have the newer and more powerful USB-C connection which helps to reduce charge times. 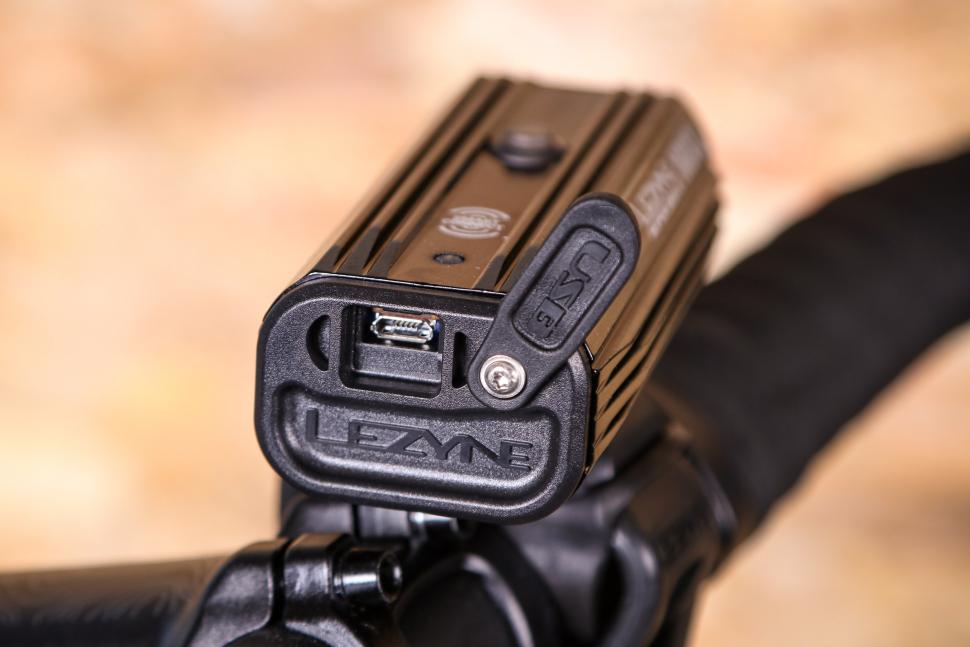 That said, the charge times aren't horrific for such a large light thanks to it supporting 2A charging. At this ampage it takes 4.5 hours to charge from flat, with the light flashing blue while charging. This time increases to 9 hours (and a green flash) for an older 1A wall charger or USB 3.0 port. I got bored waiting for it to charge from an older USB 2.0 – safe to say that it would take an age.

As I've found with all my Lezyne lights, the overall quality is very high. The machined aluminium body feels premium and clearly does a good job of dissipating heat as I never noticed any severe throttling of output to prevent overheating. The light has an IPX7 rating, meaning water shouldn't pose it any issues, and it has indeed continued to perform through some horrific weather.

The button on top has a raised profile which makes it easy to use even in gloves or with numb fingers, and this button also doubles up as the battery indicator. It uses a classic traffic light system: green for 100%, yellow for under 50%, red for under 10% and a bonus flashing red light for under 5%. 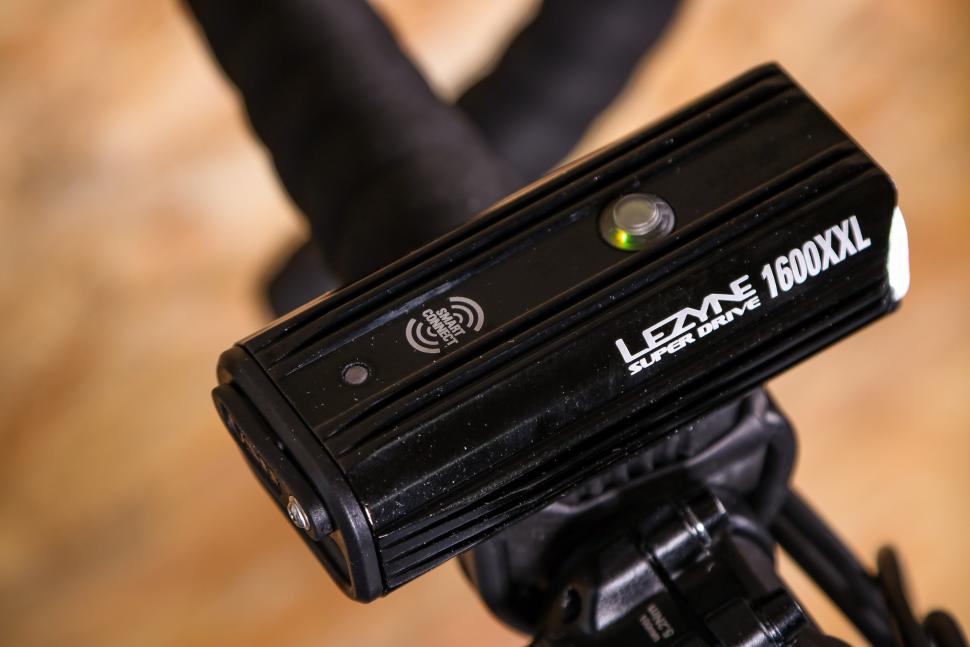 The three LEDs use what Lezyne calls Tri-Focus optics to create an 'ideal beam pattern for high speed'. Out on the road, I felt plenty comfortable enough at high speed and the light pattern is sort of squared off at the top to help prevent blinding oncoming drivers. The beam still isn't quite as road-focused as some other lights I've used, such as the Exposure Strada SL, but I never felt it was out of place and it does mean the light is versatile for multi-disciplinary riders.

There are also side cutouts to allow some light spillage to aid side visibility, which will be particularly useful to those riding in urban areas.

Compared to many lights, the simple rubber strap is pretty simple. However, it's functional and I found it held the light securely even on the roughest of roads. A removable rubber insert means the light will also fit on to aero profile bars. Installing and removing is aided by the light twisting on the bracket to provide more access.

Other mounts and accessories are available if you would rather leave a mount on the bike. This would usually be my preference, but as it goes on and off so easily I found it perfectly easy to live with as is.

It doesn't compare quite so well with the Giant Recon HL1600, which is cheaper at £99.99 and performed very well in our test last year, though is more plasticky than the Lezyne, and Ashley didn't get on with the button too well. And you can get more lumens for the same money: the Giant Recon HL1800 is the same price as the Lezyne, bar a penny. We have a full review of that one to come, but you can compare outputs using our beam comparison engine.

Overall, the 1600XXL is an extremely competent light, high quality, easy to use and live with, and the Smart Connect remedies the mode selection annoyances that we've marked Lezyne lights down for in the past. Using the app, Lezyne is able to provide software updates, with an auto day/night feature coming soon. At £120 it's easy to recommend, although if you always stick to the roads then you might ask yourself if you actually need a light this powerful.

Lezyne says, "This high-powered bike light features three high output LEDs for up to 1600 lumens of output. It has seven modes and our Tri-Focus Optics optimizes light output - this creates an ideal beam pattern for high speed."

Over the month of testing I agree with Lezyne, the 1600XXL is ideal for travelling fast even on the darkest of lanes. It's easy to use and ideal for anyone who wants to do long rides in the dark. Not all road riders will require this much light and the Super Drive is more than powerful enough for some off-road riding as well.

Simple and effective rubber clamp but more heavy-duty options can be purchased.

IPX7 rating and secure port cover, no issues during testing.

Battery life is good, but unless you have a 2A plug charging takes a long time. If you buy this light then definitely buy yourself a 2A wall charger as well.

It's no lightweight but some grams have been shaved off the older 1500XXL despite more power and longer burn times.

Lots of lumens for less money than some, if not all; nice aluminium body and IPX7 rating means it should last for ages.

Very well: run-times are good enough for long night rides; it's more than bright enough for road riding and also performed well when used off road.

It's very bright! It's also easy to switch between bikes which is nice.

As mentioned in the review, it stacks up very well. Lights of this power and quality are normally more expensive and the few cheaper options aren't made from materials as premium.

A really strong showing from Lezyne. I've always liked Lezyne lights but the mode selection has often let them down. Its 'Smart Connect' tech means this 1600XXL doesn't have those issues. It's also very good value for a 1,600-lumen light and burn-times are impressive. A USB-C port to speed up charging would be good though.