The Cycles Berthoud Aspin at a glance looks like a traditional leather touring saddle in the Brooks mould, but with its introduction of modern materials, rebuildable construction and instant comfort thanks to a pre-softening process, it has a certain refinement – je ne sais quoi, if you like – that its English rival lacks.

Although the Aspin is also made from cow leather, it's actually a completely different animal from the Brooks B17, the classic saddle of the mid-century racing man, 00s hipster and modern handmade bicycle enthusiast. Arguably it's the age-old idiosyncracies of the Brooks saddle that give it its charm, but the Aspin has been designed to function more like a modern saddle. After a month's riding there's no evidence of future 'splay', no hammocking and because the rivets (actually bolts) are on the back rather than the top of the saddle, it hasn't chewed up any clothing.

Most importantly, the Aspin was comfortable from day one with no breaking-in necessary – although of course saddle comfort is always a subjective thing as our derrieres are all shaped slightly differently.

Cycles Berthoud makes a range of leather saddles, with the Aspin (also available in black, cork or 'natural') described as its 'historic model for touring bicycles' suitable for a position intermediate between the city and race positions.

Despite the touring designation, the shape is not dissimilar to that of the San Marco Rolls, the saddle of Bernard Hinault in the second half of his career, with a longish nose that's not too narrow, a flat top, and sides that extend down to rails but not past them, as the B17's do. At 28cm it's the same length as the B17, but a centimetre narrower at the back at 16cm. 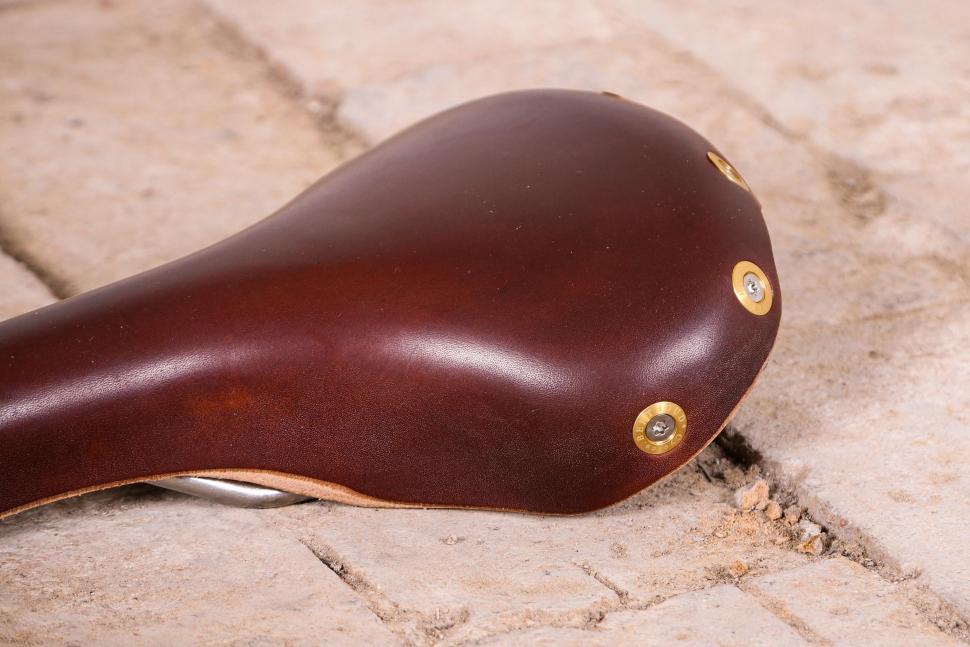 The Berthoud has the tensioned construction of the Brooks rather than the shell with glued-on cover of the Rolls – but it straddles both eras: the backplate and nosepiece of the Berthoud are made of plastic rather than steel. This is Cycles Berthoud's way of updating the traditional saddle and although some may say its leather and plastic are aesthetically at odds, the "technical material", in Berthoud's words, does have its practical uses. If you are a weight weenie it goes without saying that a leather saddle will never be for you, but at under 500g the Berthoud is 54g lighter than my B17. Plastic with its flexibility might also be better at absorbing vibration than a metal backplate, but I've never actually found this to be a problem with a steel-backplated Brooks. 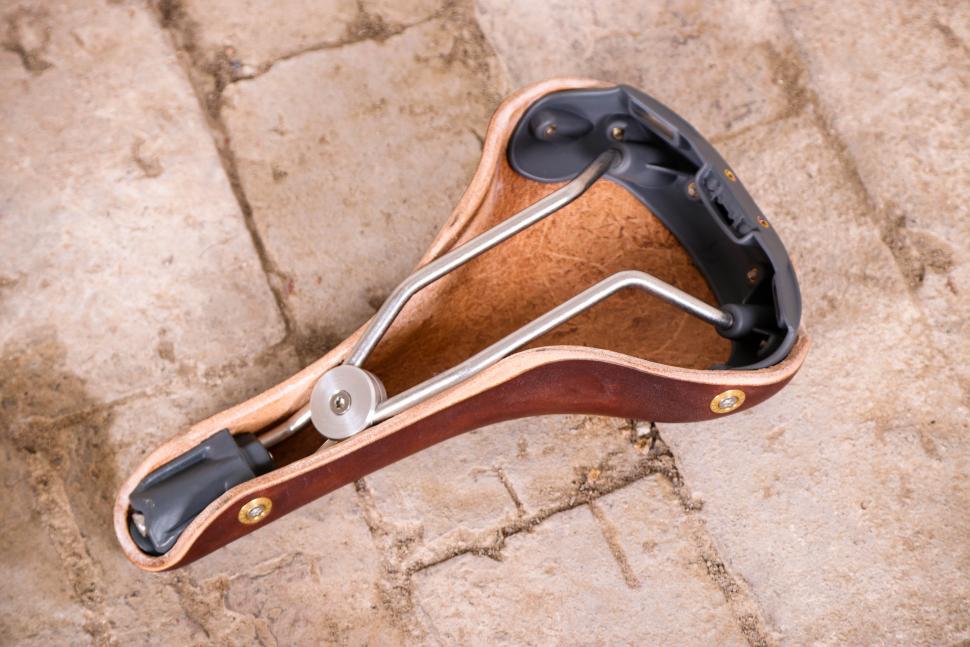 The Berthoud's leather is Torx-bolted rather than riveted to the backplate and nosepiece, so you could in theory disassemble it and replace the leather or the plastic components, whichever wore out first (my money is on the leather outliving the plastic). 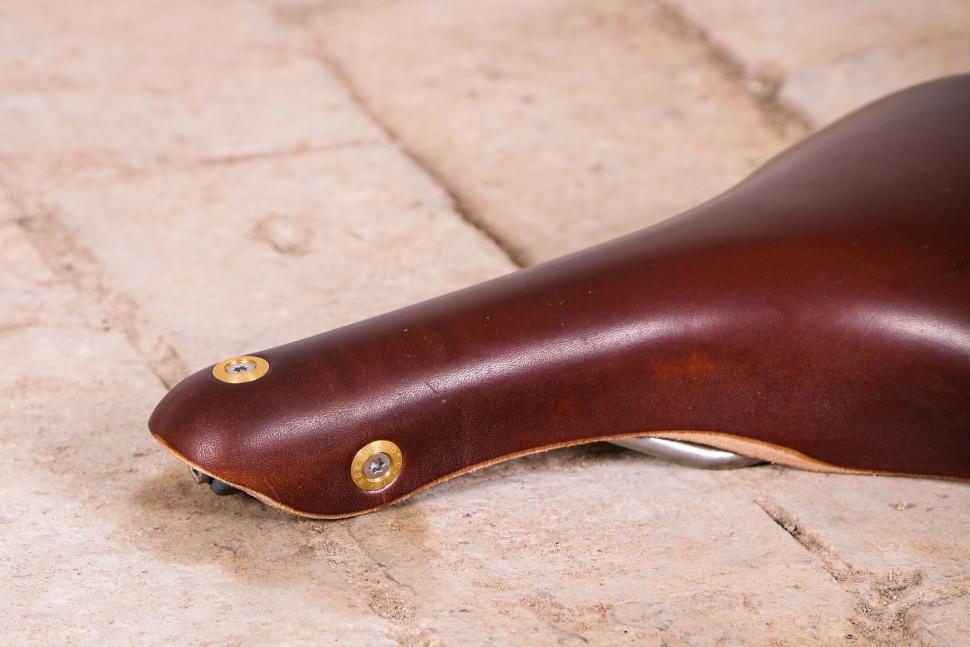 The plastic backplate incorporates bag loops set at the same width as Brooks's, so that you can affix a traditional saddle bag such as a Carradice. 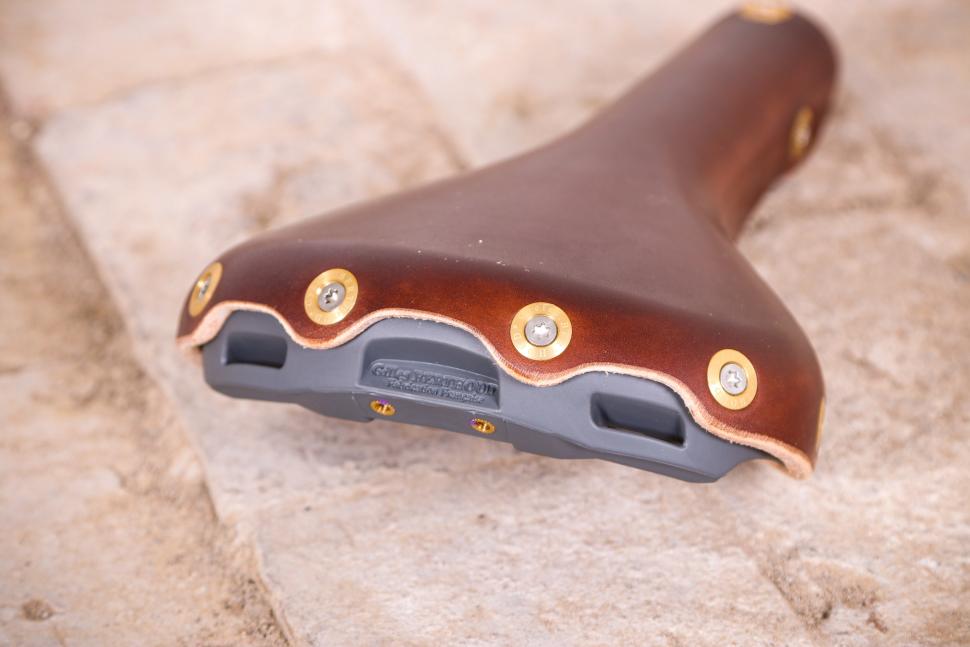 The leather itself is very stiff despite the claimed pre-softening process. I whipped out the Vernier callipers for a quick leather-thickness comparison with the Brooks B17 Standard. The Brooks is between 4-5mm whereas the Berthoud is 5-6mm (natural leather slightly varies in thickness). The extra millimetre gives the Berthoud a considerable amount of extra rigidity, and in addition the sides stay put rather than splaying outwards when you put your weight on the middle of the saddle. At this stage I can't imagine the Berthoud ever needing to be 'punched and laced' – the fate of many an ageing B17. 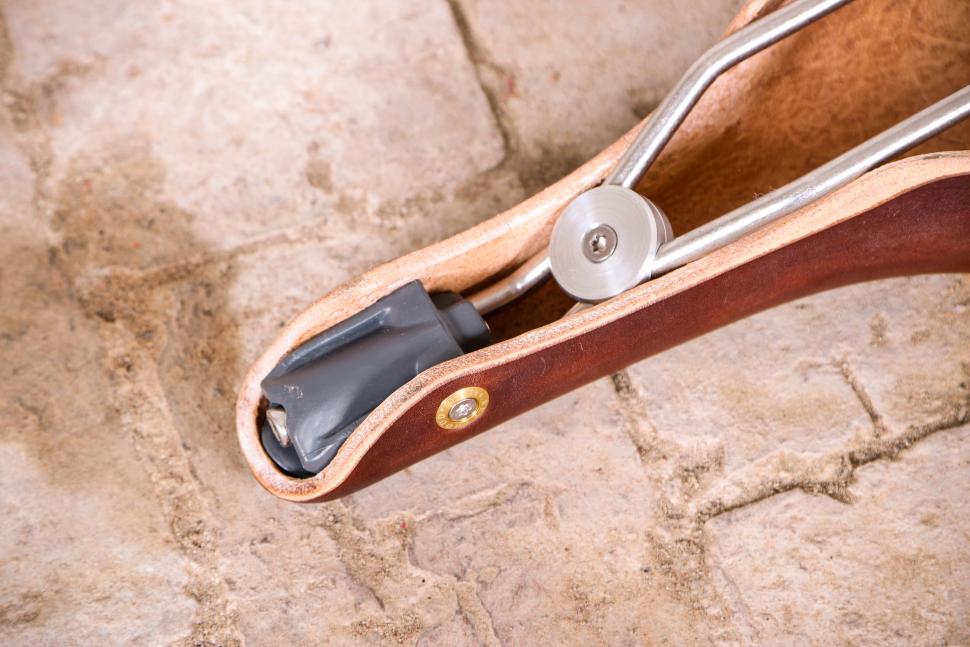 It can be used in the wet (though I didn't get caught out during the testing period) but must be allowed to dry naturally and no oil-based leather treatment must be used – just Berthoud's own leather paste conditioner twice a year.

Because of the Aspin's modern shape and resistance to hammocking, it can be mounted level just like any other modern saddle, whereas the usual tip for Brooks saddles was to set them up with the nose tilted slightly upwards, and even then it could need a lot of fettling before it felt right, compounded by the lack of fore-aft adjustment possibilities because of short rails. The Berthoud has just under 7cm of clampable (stainless steel rail), compared to the B17's 5.5cm.

Maybe it was reckless, but since the Berthoud inspired so much confidence in me, I made its first ride a four-hour club run. (I also wanted to show off, because it made my Indy Fab look even fabber.) It felt immediately right, with the little bit of suspension in the middle giving more plushness than some modern saddles with foam or gel cushioning. There was springiness in it rather than the 'give' of the B17 and other Brooks saddles I've owned.

I found the shape – as I expected – neutral. Compared to the amount there is to say about the aesthetics and construction, there's relatively little to say about this particular aspect of the Berthoud. 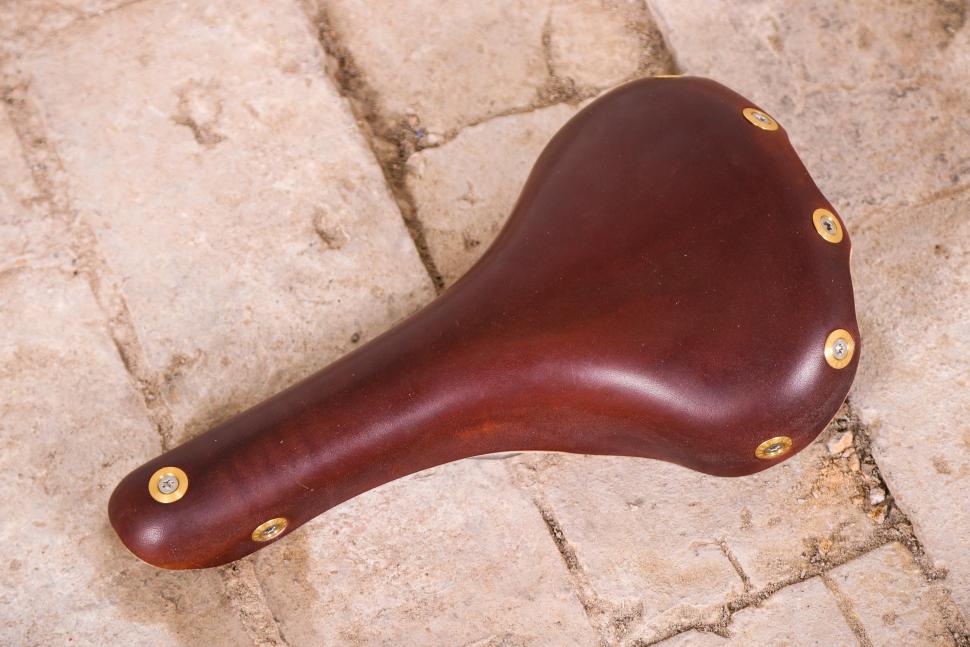 Four hours later it looked exactly the same, with no sign of any breaking-in taking place, and after a month of riding I still can't detect it conforming to my sit bones. By contrast, Shaun Audane found that the Cycles Berthoud Soulor, which is a racing saddle and is made from a slightly thinner leather, did start to break in after 85 miles.

Call me unpatriotic, but the Berthoud is easier to live with and more comfortable in my experience than a Brooks B17. However, for comfort – for me – it can't compete with a modern anatomical saddle with a cutout. The small amount of taut travel on the top does help, but pressure can build up on the so-called fleshy tissues underneath if you spend any time on the drops in a more aggressive position. But then again, Berthoud says it's not for a race position, so it can't be marked down for that, and the Berthoud's target audience is not the flat-backed racer.

For such an expensive-looking thing, the price is not ridiculous: a modern pro-level saddle such as the Cadex Boost is getting on for twice the price. Perhaps more relevant is that a leather saddle, if looked after properly, will last years and possibly even decades and, as they say, quality never goes out of style. So I would say it's worth the €179.

The Cycles Berthoud Aspin is a classy saddle that updates the traditional tensioned leather type with considerable panache. It not only looks incredibly stylish, as long as you can live with the visible plastic backplate – the Berthoud Soulor's plastic backplate is mostly concealed – but it has a plush, if very firm, ride that makes it perfect for longer sojourns in a more upright position.

Classy looking with a modern twist, this is a leather saddle for the 21st-century connoisseur

Cycles Berthoud says the Aspin is: "For the touring cyclist who has a riding position intermediate between the city and race positions."

* Pre-softened to shorten the break-in period.

* Bolt assemblies at the rear of the saddle are situated behind the area on which the cyclist sits. No risk of damaging your cycling shorts or your skin!

* Backplate made of technical material providing solidity and flexibility for maximum comfort. Loops for a saddle bag. Grooves and threaded inserts for a Klick-Fix system.

* Easy to disassemble thanks to an system of stainless steel bolts which fit into special-shaped brass washers. The cone-shaped washers fit snuggly into the leather avoiding any risk of damage.

* Each saddle is individually marked with an unique serial number etched on the brass washer on top of the nose.

* The leather density fluctuates between hides so the saddle weight can vary.

Beautifully made by hand in France. Not for vegans.

It performed well as a touring saddle in a more upright position.

I have no doubt that the leather will last for decades if properly looked after, but steel – as used by Brooks – would seem a better material than plastic for the backplate and nosepiece if they are to match the leather's durability. It doesn't seem to be 'breaking in', which also suggests good durability. The other great thing about leather is that if it slips against a wall, is dropped or crashed, the scuffs will polish out.

It's a leather saddle and its job isn't to be lightweight.

It's comfortable in a more upright touring position, but saddle design has come a long way and, for me anyway, it can't match a modern anatomical saddle with a cutout for comfort.

If you want leather and handmade it's never going to be cheap, and the current exchange rate means it's undercut by both the Brooks B17 and Swift. However, pro-level saddles such as the Cadex Boost are twice the price.

For a four-hour group or endurance ride it performs very well. I didn't go touring on it – but would not hesitate to.

Even though I had my initial reservations about the look of the plastic backplate, it looks amazing on my steel Independent Fabrication. I also love the handmade, high-quality construction, the look and feel of an expensive pair of shoes... it's pure luxury goods.

There was nothing I particularly disliked about it. I learnt to live with the look of the plastic backplate.

The current exchange rate at time of publishing puts the €179 Aspin at about £165; Brooks' B17 is £98-£105, while the Brooks Swift is £120. If you're interested in retro saddles check out the Selle Marco Concor Supercorsa, which has a leather cover rather than a tensioned construction, but still has a classic look.

The Cycles Berthoud Aspin is beautifully made, looks incredibly chic and is comfortable, if not quite full-marks comfortable because of the leather being very stiff, and should supply decades of stylish service.

I regularly do the following types of riding: time trialling, commuting, touring, club rides, sportives, School run on a tandem 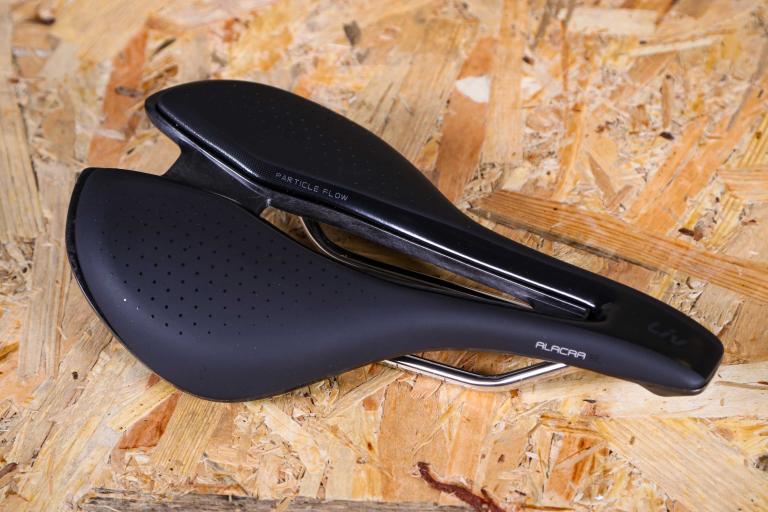 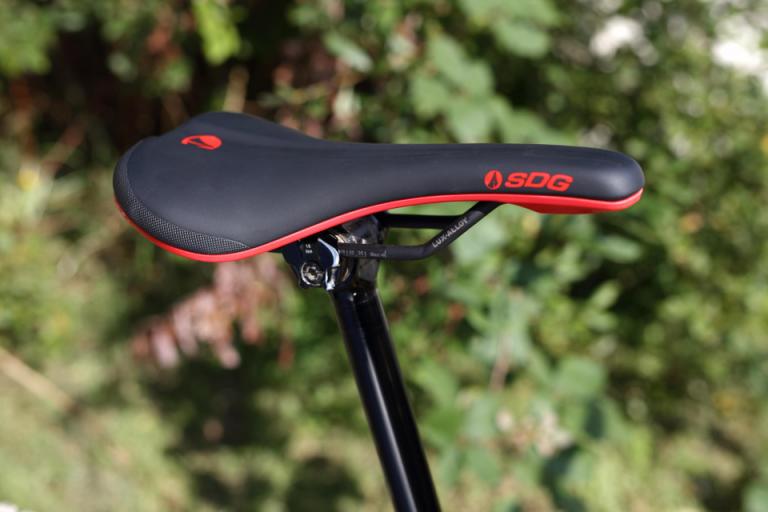 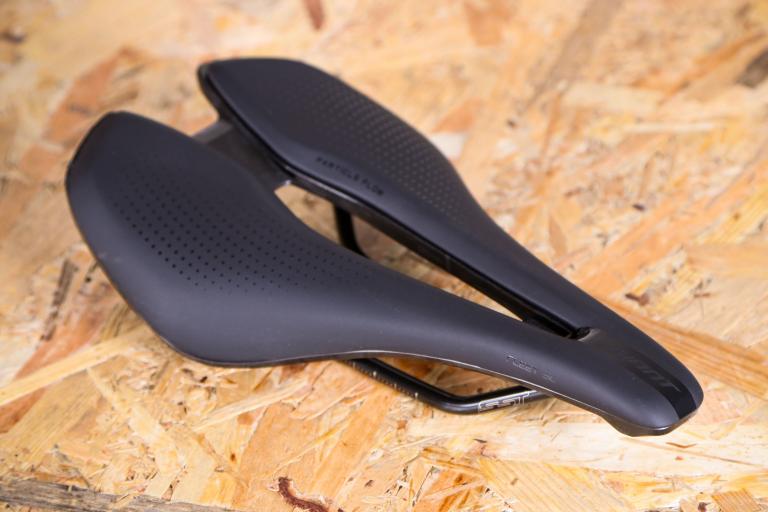 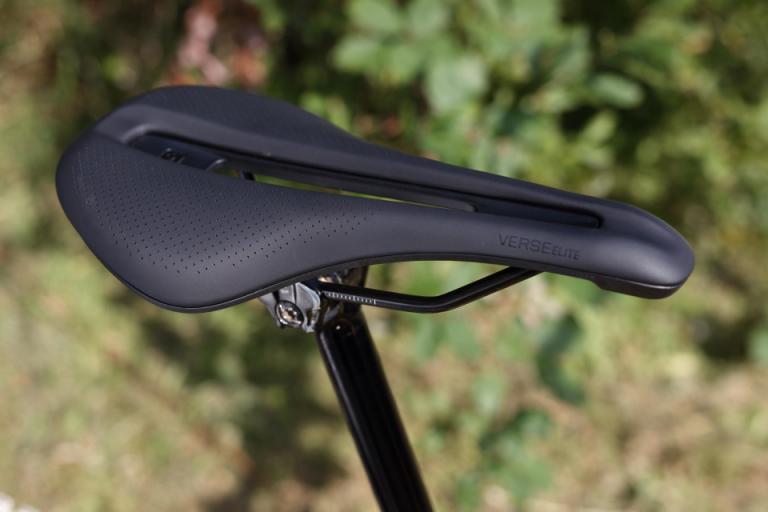 Versatile and comfortable with lots of width options, but won't change cutout-haters' minds