The Oxford Ultratorch 2K chucks out a whopping load of lumens and has some pretty decent run-times for the large battery pack. Its beam pattern is poor, though, which makes it less than ideal for road use, plus it is fairly hefty.

I've just reviewed the 2K's little brother, the 850, and it looks as though there is a common theme running through the Ultratorch range. The reflector and lens technology is simplistic, and having to scroll through the off position while riding is downright bizarre, both of which let down what are otherwise decent quality lights with very good run-times.

The 2K uses three LEDs which put out a combined maximum output of 2,100 lumens, an impressive amount for a light that costs less than £100.

The problem is, with just a basic polycarbonate lens slapped in front and a simple reflector surrounding them, it does nothing focused with that colossal amount of illumination. You get an intense spot that you can direct down the road, while the rest of the light is bounced off the tops of trees and surrounding buildings.

This means that in the real world probably only half of that firepower is being used effectively. The splayed beam of light means that in the higher settings the 2K is downright antisocial to oncoming traffic and is only really useful for excursions off-road. Even then it isn't great as the light spread still isn't ideal.

It's a shame, because on maximum you can ride for two hours which is impressive, though admittedly there is a big battery in there which makes the 2K a bit on the porky side at 343g, plus it'll take 8 hours for a full charge. 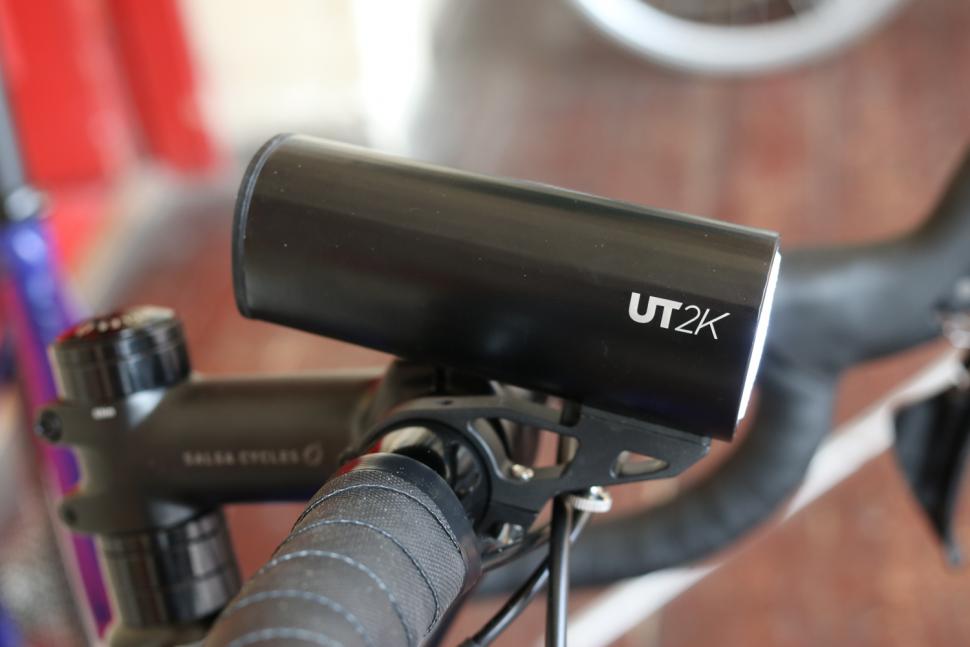 The power button is on the rear of the light and glows either green or red to display battery life. This is the only button on the light, so you use it to scroll through the modes from high down to low. When you get to low, though, your next click will turn the light off – perfect when you are cruising along a dark country lane in the depths of night! You can turn the light off by pressing and holding the power button, so why not just omit the 'off' from the cycle?

The bracket is alloy and it'll fit both 31.8mm and 25.4mm diameter handlebars with the shims included. It's sturdy too, and to make sure the light doesn't come detached from the mount you can use the thumbscrew to attach it. A neat touch. The charge port (below the on/off switch) has a rubber cover which keeps the rain out and I had no issues with ingress during testing or from a blast from the bathroom shower for good measure. In fact, the overall build quality is very good indeed.

As I've said, a 2,100-lumen light for a penny under a ton is a good price – or it would be if it wasn't for all of the issues mentioned above.

For the same money you can get the Giant Recon HL1600. True, it's only got 1,600 lumens, but it uses them well with a flat, wide beam pattern, and while it gets beaten convincingly by the 2K on burn-times the Giant connects with a speed sensor (purchased separately) and uses ambient light to auto-change modes, which increases battery life.

When it comes to big output lights on a budget, Magicshine is probably one of the most well-known. The trouble is, the ones I've used have similar issues to the 2K, a point echoed by Mike's review of the MJ-902B Smart Light – poor lens design and scrolling through unnecessary modes being the theme.

Overall, I think the 2K shows that if you want a big output light it's worth paying a bit more for decent lens technology.

There is nothing much to it as there is only one button.

A quality clamp design that is sturdy and keeps the light attached no matter how rough the ride.

No issues with water ingress.

Good battery life, although a full charge does take a lengthy 8hrs.

A big battery means it is weighty.

On paper, pretty decent, but in the real world its performance means it's not such great value. At the £100 mark we see many 1,000 to 1,600-lumen lights, but some are a better design and use more of those lumens in a controlled manor. That said, there are similarly priced lights that suffer from the same issues.

It'll work better as an off-road light but it is still wasting a lot of the light output upwards.

Scrolling through 'off' to get back to high beam.

Did you enjoy using the light? No

A well-made light with good battery life but poor optics mean that illumination is being spread all over the place, making it pretty average in performance.