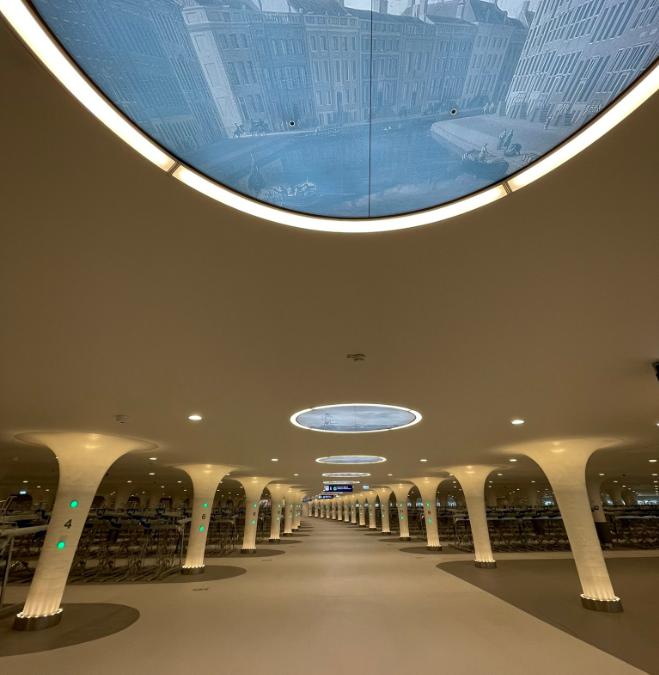 Underwater cycle garage – with space for 7,000 bikes – set to open in Amsterdam

The facility, which opens on 26 January, is located next to the Dutch capital’s central station and will allow cyclists to park their bikes for free for up to 24 hours
by Ryan Mallon

Even by the Netherlands’ lofty standards, Amsterdam’s latest piece of cycling infrastructure is impressive. A cycle parking facility, with space for 7,000 bikes, is set to open on 26 January next to the Dutch capital’s Centraal Station – and it’s underwater.

The subaquatic garage replaces the railway station’s existing surface-level, multi-storey bike parking facilities, which became in recent years synonymous with messy, overcrowded rows of rusty bikes, and is the result of a four-year, €60 million project to provide clean, safe underground cycle parking for the station’s users.

Beginning in 2019, the garage’s construction – captured in all its glory in a timelapse video below – involved draining a lake of water next to the station, itself built on three man-made islands.

Cyclists will be able to park their bikes for free in the new garage for up to 24 hours, and then at a cost of €1.35 for every 24 hours after that, while a moving walkway will provide access to the country’s busiest railway station.

Red and green lights will tell users if spaces are available, while a new system – set to commence in April – will display to commuters which bike park has room and how many spaces are free.

And if the 7,000 spaces in the underwater garage weren’t enough, parking for a further 4,000 bikes is also available at another new facility on the side of the IJ harbour, above the city’s North-South metro line.

Reflecting on the upcoming opening of the underwater garage, Pieter Visser, the Amsterdam municipality’s bike project manager, told the Guardian: “Central station is one of the busiest places in Amsterdam. A lot of bikers use this precious public space to bike and park.

“The municipality chose to facilitate underground bike parking (in this case, underwater) to return the public space to pedestrians, tourists, and people with disabilities.”

“It’s great that people can jump on their bikes, get to the station and get on their journey seamlessly,” says Jeroen Wienen, a spokesperson for the Dutch government’s railway organisation, ProRail.

“The Netherlands is a real cycling country, a lot of people come to the station by bike, and we and the municipality certainly don’t want all those bikes lying around. You want to offer people a decent place where they can put their bikes safely, so the streets are nice and clean for the neighbourhood.” 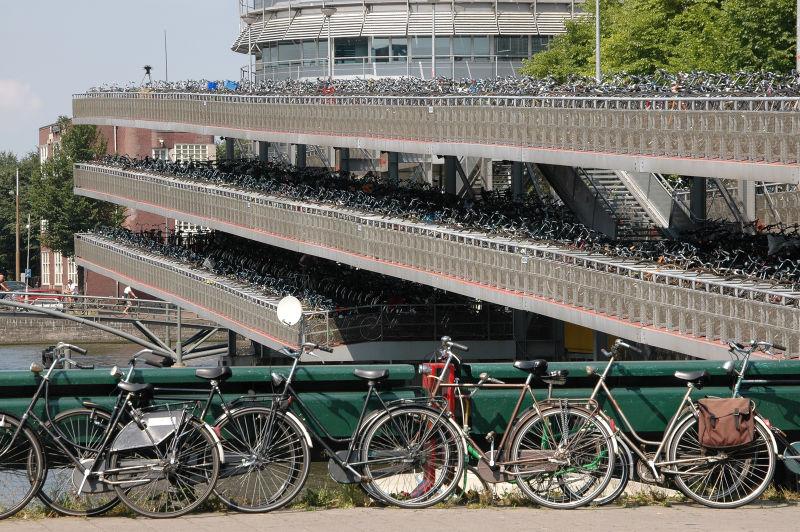 Marco te Brömmelstroet, director of the Urban Cycling Institute at Amsterdam University, told the Guardian that the key to the project’s success was its ability to link different forms of travel.

“It’s a lovely project, because it’s not a cycling project,” he said. “It makes visible the real (and often invisible) success factor in Dutch mobility and spatial policy: the bike-train combination.

“Before, there was a temporary multi-storey bike rack, which immediately flowed over. It became one of Amsterdam’s most photographed objects and the municipality was embarrassed about [it].”

Meanwhile, Lucas Snaije, a research and advocacy manager at the cycling campaign group BYCS, said that the project should encourage other nations to prioritise “last-mile” cycling by creating proper cycle facilities at train stations.

“Prioritising cycling is an incredible means of making cities more inclusive, and it also promotes community, trust and wellbeing,” he said.

The praise afforded to Amsterdam’s new underwater cycle parking garage stands in stark contrast to the underwhelmed and even critical response to the opening earlier this month of the ‘bike hub’ facilities at the recently redeveloped Battersea Power Station.

Here’s a little 🧵 about parking your bike. pic.twitter.com/TAiqkVN3JB

A Twitter thread exploring the new cycle parking at Battersea criticised its accessibility, as well as the type and placement of the bike racks installed, with the cyclist responsible for the thread branding the project “the biggest, fanciest, least easy to access, most ill-conceived bike storage facility in London”.

Ely Cycling Campaign also described the hub as “the tragic story of a well-funded cycle project being spoilt by obstinate developers who are unwilling to look at best practice”.