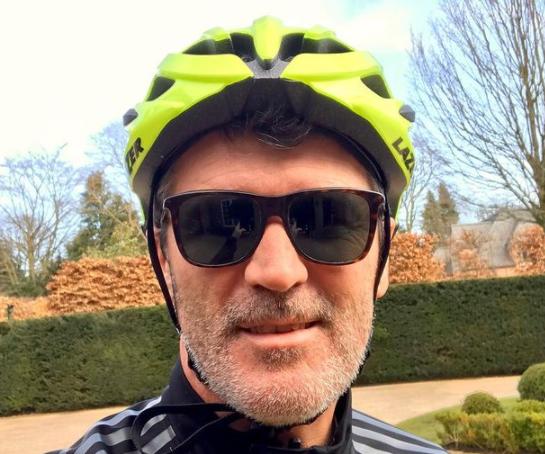 The former Manchester United captain has spoken previously about his fondness for getting out on the bike. Just don’t ask him to wear Lycra – or fix a puncture…
by Ryan Mallon

Retired football star Roy Keane has said that cycling is his only way of keeping fit these days – though the former Manchester United captain is quick to dismiss any potential comparisons between himself and another legendary Irish sporting hardman-turned quotable pundit, Sean Kelly.

Keane, who led United to seven Premier League titles, four FA Cups and a Champions League triumph during his twelve-year spell in Manchester, told Irish sports podcast Off The Ball last week that his fitness levels are “very embarrassing”, despite doing “a small bit of cycling” when he has the chance.

“I’m not fit. I’m far from fit,” the 51-year-old, who has recently pursued a colourful career in television punditry following a stint in management after retiring from the game in 2006, said.

“My fitness levels are actually very, very embarrassing. Just because I’ve not put on loads of weight doesn’t mean to say I’m fit. I wouldn’t be able to do any sort of running.

“Put it this way, I’ve been invited a number of times over the last few years to play ‘legends games’ or whatever you want to call them. I’d find it really difficult because I wouldn’t be able to get around. Too many injury problems.

“I try to have a decent diet, obviously, and I’m obviously wary about putting on too much weight. But I certainly wouldn’t be fit enough to go on any sort of run. I do a small bit of cycling, but even that – I’m not exactly Sean Kelly, you know.”

> Roy Keane fed up with supposed war between cyclists and motorists

The Irish sporting great has previously spoken about his passion for getting out on the bike – though you may want to reconsider gifting him a replica Kas kit just yet.

Last year, Keane shared a snap of himself about to head out on a ride on Instagram with the caption: “I’ll wear the helmet but if you see me wearing Lycra, run me over.”

However, in a conversation with cycling commentator Ned Boulting last July, while the pair were working for ITV on the European Championships and Tour de France respectively, the former box-to-box midfielder expressed his sympathy for cyclists forced to deal with dangerous motorists.

“Roy said ‘you know this whole thing, the supposed war between cyclists and motorists? It's all the motorists’,” Boulting recalled during his Never Strays Far podcast.

“He said ‘you might get one or two idiots on a bike but until I’d experienced what it was like to get a close pass from a white van, and the way people disrespect cyclists.’ He was really empathetic.”

> "If a pro cyclist could come into a football club and show the players how hard they work it would really open their eyes", says Ben Foster

Just don’t ask the Corkman to help out if someone punctures on the group ride.

“He’s got a great story about getting a bike and he’s even more mechanically inept than I am,” Boulting said.

“The one skill I have, inflating a tyre... he can’t even do that – and he’s never tried. The first time he got a puncture on his road bike, not only did he not repair it himself, he threw the bike away and got another one!”

All credit to puncture repair kits…