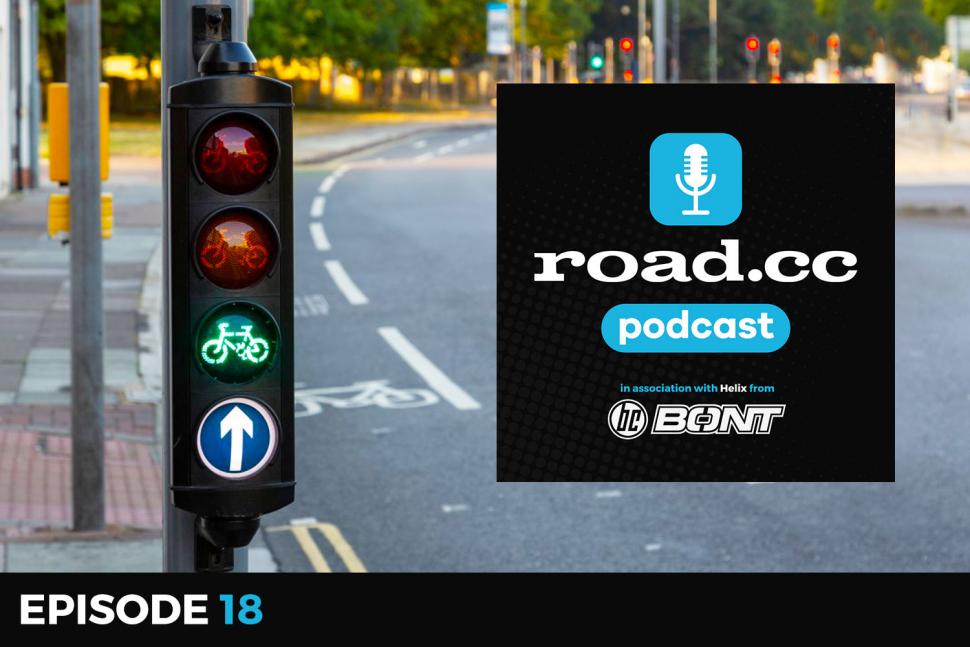 Highway Code changes, plus father of child almost hit by Range Rover driver while cycling on the road.cc Podcast episode 18

We put the record straight on road rule changes misreported elsewhere, talk shoe tech with our Podcast sponsor, and road safety with parent and cycling campaigner
by Simon_MacMichael

The latest episode of the road.cc Podcast in association with Bont is now live to listen to, and in this episode we talk to the cycling shoe specialist firm, discuss the changes to the Highway Code that came into force a couple of weeks ago, and also speak with the father of a child who was almost hit by a Range Rover driver while they were cycling in south west London.

The new Highway Code has of course received a lot of attention in the national media in recent weeks, not all of it accurate, and in a round-table discussion road.cc’s George, Simon, Ryan and Jack address some of the misconceptions that have arisen as a result as well as clarifying what has actually changed.

Simon also speaks with Tim Lennon, after a video he shot several years ago of his daughter, then aged nine, was almost knocked off her bike by the driver of an SUV.

The video was posted to Twitter last week as an example of how recent changes to the Highway Code can help protect vulnerable road users and was picked up by the mainstream media – with coverage by Mail Online focusing more on the fact that the young girl was not wearing a cycle helmet than the danger the impatient motorist put her in.

The newspaper branded Danny Williams, who retweeted the clip on Twitter and who has long campaigned for safer streets for people on bikes, including sitting on Transport for London’s Roads Task Force when Boris Johnson was Mayor of the city, a “cycling zealot” in its article.

To all those people moaning about the new Highway Code rules and they don't think they should give cyclists (or horse riders) space when overtaking, this is why. https://t.co/qALjvGzy0X

It headlined its piece with – deep breath – 'To all those moaning about the new Highway Code, this is why': Cycling zealot says video of Range Rover nearly hitting young girl on bike PROVES cyclists should be in the middle of road... but irate drivers ask why she isn't wearing a helmet?

The Sun also covered the story, although while also referencing the lack of helmet, at least its headline emphasised the fact that the youngster was nearly knocked off her bike, saying, CLOSE CALL Moment Range Rover almost HITS little girl cycling without a helmet as driver insists ‘we need the Highway Code’.

The video (a longer version of which appears below) was shot in October 2016 on Ham Common near Richmond Park by Tim Lennon, who is co-ordinator of Richmond Cycling Campaign, and who was accompanying one of his daughters, aged nine at the time, to her friend’s house.

In our chat, Tim talks about the impact of the incident, saying “You just don't expect people to drive like that round yourself, let alone around children,” as well as the press reaction last week, which he describes as “really disappointing,” as well as speaking more generally about his work with Richmond Cycling Campaign, including what he hopes to see happen in the borough, including Richmond Park.

Finally, road.cc tech editor Mat Brett has been speaking with Alex Malone of the road.cc Podcast sponsor Bont about how it goes about producing what are among the best cycling shoes in the world, and what technical developments we can hope to see in the future.

As ever, feel free to message us with any feedback or stuff you'd like us to discuss in forthcoming episodes at podcast [at] road.cc.