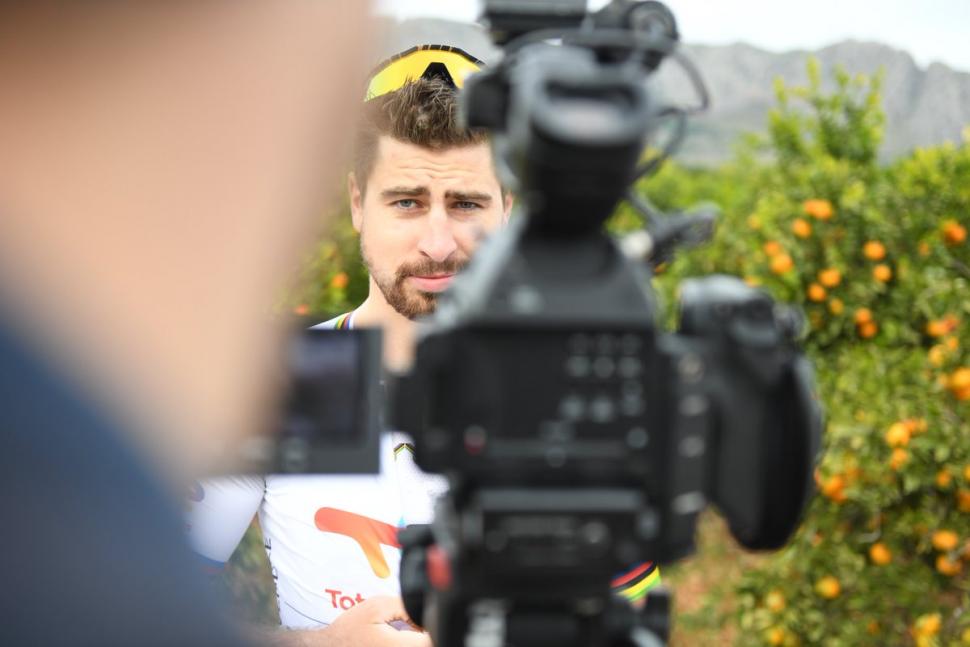 The three-time world champion is the latest rider to abandon the Covid-ravaged Tour de Suisse, with fewer than 80 riders expected to start today’s final time trial stage
by Ryan Mallon

Peter Sagan is the latest rider to feel the effects of the Covid-19 wave currently spreading throughout the peloton at the Tour of Switzerland, as the three-time world champion announced this morning that he has tested positive for the virus – the third time in less than 18 months that the Slovakian star has contracted Covid.

Sagan, who ended a 13-month winless drought earlier this week by bludgeoning his way to an impressive bunch sprint victory in Grenchen, tweeted: “Yesterday, Saturday, after the finish of stage seven of the Tour de Suisse, I was given a Covid-19 test by the Team TotalEnergies doctor.

“Unfortunately, it came out positive. I have no symptoms, and I feel well but I have to abandon the race. I thank you for your support and I will keep you posted.”

The Tour de Suisse – traditionally viewed as a key warm-up race for the Tour de France (and an important event in its own right) – has been ravaged by the return of Covid-19 to the professional peloton this week.

Only 81 riders, out of 153 who started the eight-day race, completed yesterday’s stage to Malbun, as Jumbo-Visma and Alpecin-Fenix abandoned en masse after positive Covid tests, while various riders from other teams, including Ineos Grenadiers’ Tom Pidcock and Bora-Hansgrohe’s Aleksandr Vlasov (who was leading the race at the time of his withdrawal), also contracted the virus.

Riders have also been forced to withdraw from the Tour of Slovenia, running this week alongside the Tour de Suisse, after testing positive for Covid, including Mikkel Bjerg, a teammate of two-time Tour de France winner – and current Tour of Slovenia leader – Tadej Pogačar.

Sagan’s withdrawal from the Tour de Suisse, which comes as the 32-year-old TotalEnergies rider finally appears set to once again challenge for stage wins at the Tour de France after a few (by his lofty standards) fallow years, is the third time that the former Tour of Flanders and Paris-Roubaix champion has contracted Covid-19, after positive tests in January 2022 and February 2021.

In November last year, the seven-time Tour de France green jersey winner was also fined €5,000 by a court in Monaco after infringing a Covid-19 curfew, as well as injuring a police officer as he struggled with them, apparently afraid he would be “forced to be vaccinated”.

He admitted in court that he was drunk when police stopped him and his brother, and fellow pro Juraj, at around midnight on 25 April.

He was reported to have “struggled like a mad person” as police tried to take him into custody, with one officer sustaining an injury to their hand.

However, Sagan’s lawyers said that he had resisted arrest because he was afraid that he would be “forced to be vaccinated.”

The Slovakian rider spent the night in custody and said afterwards that he could not remember what had happened.

He also issued an apology, blaming the incident on having drunk too much, something he said he was not used to.

Away from the Covid-enforced drama, Welshman Geraint Thomas goes into today’s final stage of the Tour de Suisse, a 25.6km time trial around Vaduz, as the heavy favourite to take the overall title ahead of Bora-Hansgrohe’s Colombian climber Sergio Higuita, who sits only two seconds ahead of the Brit – a superior time triallist – on GC.

If Thomas does take the title today, it will be only his second stage race victory since his career-defining win at the 2018 Tour de France.