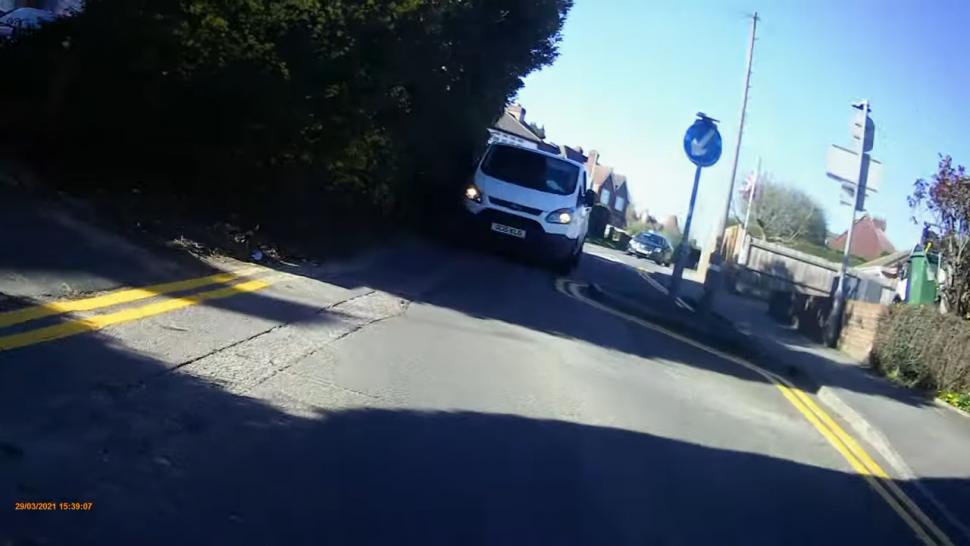 Near Miss of the Day 562: Three blokes in a van speed through chicane, forcing cyclist riding uphill with priority to swerve

Our regular series featuring close passes from around the country - today it's Kent...
by Simon_MacMichael

Today’s offering in our Near Miss of the Day series shows a van driver on the outskirts of Maidstone ignoring a sign instructing him to give way to oncoming traffic at a chicane designed to slow motorists down – and in the process forcing a cyclist who was riding uphill in the opposite direction to swerve to the side to avoid getting hit.

It took place on Spot Lane in Bearsted, a village on the edge of the Kent county town, with the cyclist it happened to telling us: “I was cycling UP the hill- the fat bustards in the van were coming down the hill.”

We took a look on Google Street View at what signage the driver would have encountered coming down the hill ahead of the chicane, and the instruction to give way to oncoming traffic is clear enough, as are the road markings. Of course, we don’t have to tell you that it’s frustrating enough when you’re in a motor vehicle and a driver coming the other way ignores this kind of sign ... but it’s many times worse when you’re riding a bike uphill and have your momentum destroyed, not to mention possibly having to get your feet out of the pedals pretty sharpish if you’re riding clipless.