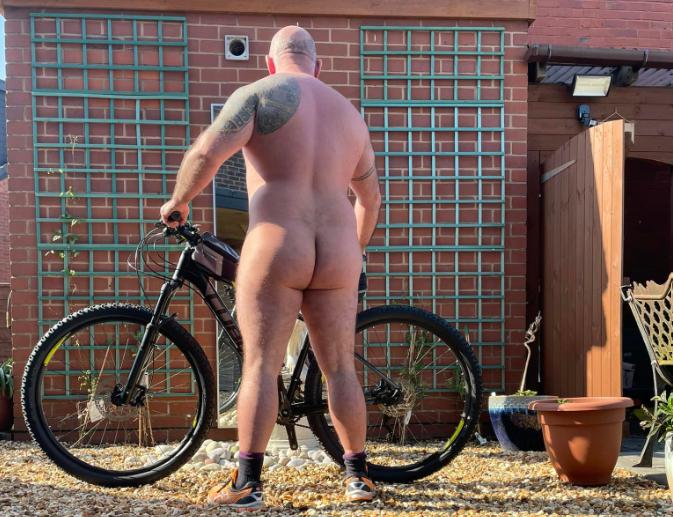 A naked cyclist spotted cycling around Derbyshire in recent days has revealed that he is a naturist who simply enjoys riding his bike in the buff – and that he is planning a ride in the altogether over the summer to raise money for charity.

Stuart Gilmore from Manchester, who posts on Facebook as Naked Cyclist, shared a video on his page that was taken from a vehicle following him as he cycled nude through Ashbourne on Tuesday.

He was also seen riding without clothes on Easter Sunday in the nearby village of Fenny Bentley, with local media reporting on his rides.

Speaking to Derbyshire Live after he became aware of his new-found fame in the Peak District, where he enjoys riding his bike, he said that he found cycling while naked to be an excellent way of getting to meet people, as well as highlighting body positivity.

“I’m a naturist who just loves to be able to experience everyday life without the restrictions of clothing, promoting body positivity, embracing the individuality that is our bodies, showing people it’s okay to be different whether that be size, shape or colour and the general wellbeing it can give you,” he said.

“But most of all it’s meeting so many new people and making new friends while cycling. If I was clothed no one bothers you, you just ride past, but when in the buff people are just genuinely intrigued and want to know more.

“"I was staying at a local campsite that was amazing, I might add the staff there are so nice. When the weather allows, I like to get out on my bike in the buff as much as possible, I’ve also been on a few walks in the past, I’ve never had a bad reaction, it’s always met with laughter or intrigue to know more.

“I had only just heard about the Tissington Trail, so I thought I would check it out for my wife and I to do at a later date. I ended up in the centre so with it being early I thought I’d just do a once-round to check out the nice shops but then I lost my bearings and got lost and ended going round more than planned, hence the video.”

Regarding his local fame, he said: “I had no idea this would get so much attention – I’m genuinely shocked. I’m always cycling on Rochdale Canal or around Manchester and never had this kind of interest before.

“This wasn’t for charity this time but I am planning a naked bike ride from Manchester to Chester possibly on to North Wales in the summer to raise money for a cancer charity my wife Karen Gilmour works for,” he continued.

“As a family we have lots of fun on our travels. It's all about fun, love, laughter. Get out there don’t let your body hang-ups stop you, for one day you won’t be able to do the things you once wanted and you will look back with regret,” he added. “Get old with no regrets and lots of memories.”

One eyewitness, Jade Meadows, told Derbyshire Live: “It was about 2.30pm yesterday and I was surprised to see him but then again it is Ashbourne. Quite a few people have seen him in the town. We saw him opposite Shawcroft car park, near Ashbourne Fire Station. A pale, naked man on a bike.”

Derbyshire Live says that police received one report that a man had been spotted cycling nude.

Under the Sexual Offences Act 2003, in England public nudity is not illegal unless there is intent to cause alarm or distress to others – something organisers of local editions of the World Naked Bike Ride, who clear the event in advance with local police, point out.

Earlier this month, we reported how police in Greater Manchester were alerted to a man cycling naked with an “erect member” at Hulme’s Wood in Denton – although witnesses described him as having long, dark hair, which clearly going from the photo and video above is not a description that could be given to Mr Gilmore.