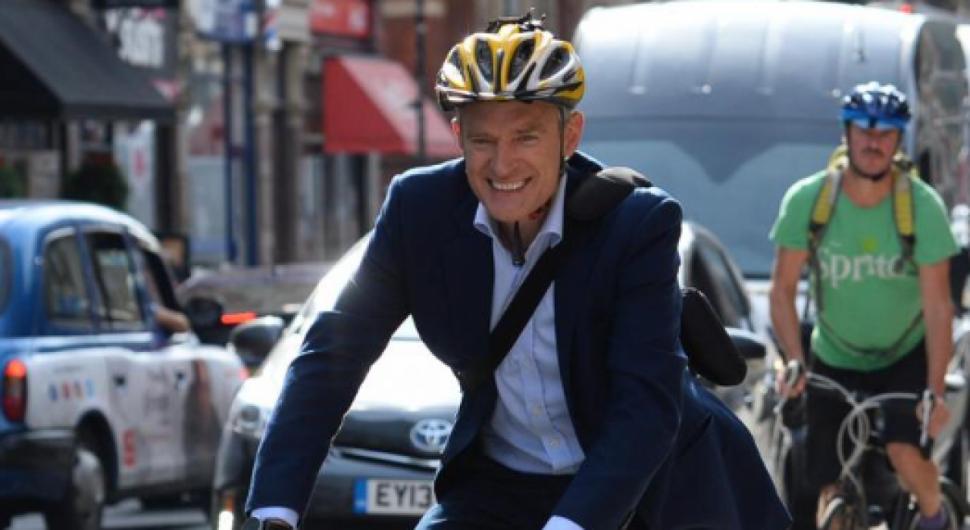 The BBC did acknowledge, however, that the presenter was subject to “personal abuse” by the One Chiswick Facebook group, which opposes cycling infrastructure and Low Traffic Neighbourhoods
by Ryan Mallon

The BBC has ruled that broadcaster and outspoken safe cycling advocate Jeremy Vine breached the corporation’s impartiality rules by publicly voicing his support for Low Traffic Neighbourhoods (LTNs) and safer cycling infrastructure near his home in Chiswick.

Radio 2 presenter Vine, who regularly posts footage of his London commute on Twitter, was the subject of a complaint to the BBC from a leading anti-LTN campaigner in Chiswick concerning his social media conduct.

The complainant – believed to be a member of the One Chiswick Facebook group known for its stance against traffic-calming measures, road closures and pop-up cycle lanes, and with whom Vine has had a number of public altercations in recent years – claimed that tweets posted by the broadcaster constituted a “campaign of abuse against a legitimate campaigning group”.

They also alleged that Vine, despite his reputation as an enthusiastic advocate for cycling and active travel, expressed a view on a controversial matter in a manner inappropriate for “a journalist who should be non-biased”.

Following an investigation by the BBC’s Executive Complaints Unit (ECU), Vine’s conduct on Twitter was found to have been “inconsistent with the BBC’s editorial standards as they applied to him”.

However, the ECU dismissed the claim that Vine had coordinated a “campaign of abuse” against One Chiswick, and instead “had primarily been responding to posts from a Facebook group superintended by the complainant, which had been drawn to his attention by a member of the group, wishing him harm and describing him in opprobrious terms.”

The ECU said that Vine “was entitled to object to such personal abuse and, as he did so in terms which were not themselves abusive, his tweets were consistent with the relevant BBC Guidance in that respect.”

> “Get off your bikes!” Anti-cycleway campaigner yells at kids using new route

When considering whether the presenter had broken the corporation’s guidelines concerning journalistic impartiality, the ECU noted that “the Guidance makes clear that the BBC’s standards should be observed in personal social media activity, as well as on air, by those who work in journalism and factual programming, and the topical content of Mr Vine’s programme on Radio 2 brings him within that category.

“The introduction of a LTN was a source of sharp controversy in Chiswick at the time in question, (mirroring controversies in other localities where LTNs have been introduced), and was the kind of topic to which considerations of due impartiality applied for the BBC.

“To the extent that Mr Vine’s Twitter activity since the relevant Guidance came into effect appeared to endorse one viewpoint on that topic and controvert another, it was inconsistent with the BBC’s editorial standards as they applied to him, and this aspect of the case was upheld.”

According to a report in the Guardian, two other BBC staff have been informally warned by managers to avoid expressing public support for LTNs where they live, due to the scheme’s “politically contentious” nature.

The ECU did, however, make it clear to the complainant that Vine remained entitled to use Twitter to voice his enthusiasm for cycling in general, as well as calling attention to its “potential benefits”.

This isn’t the first time that the row between Vine and One Chiswick, a group the presenter described in March as a “source of persistent malevolence towards cyclists in my area”, has reached his employers at the BBC.

Vine was reported to the BBC in May 2021 over claims that he “bullied and intimidated” the anti-LTN activists by alleging they had decapitated flowers belonging to a safe cycling campaigner.

The presenter posted an image on Twitter of “severed” flower heads which had been spread out on a resident's doormat, and explained how the woman, a safe cycling advocate, had been subjected to “so much abuse” from a local anti-cycling group.

One Chiswick then wrote to the BBC Director General, Tim Davie, insisting that Vine had made unfounded “libellous and defamatory” claims against them, though the presenter maintained that he wasn’t directly accusing anyone but said the “local anti-cycling brigade” had created an atmosphere where someone “might think it is OK to do something like this”.

In December 2021, David Giles – a prominent One Chiswick campaigner who had been suspended as chairman of the Chiswick Riverside Ward Conservatives two months previously for describing Labour-run Hounslow council as the ‘Brentford Taliban’ – was filmed by Vine shouting at people taking part in a ride to celebrate the opening of a new section of Cycleway 9 from King Street to Goldhawk Road.

Driving his car in the opposite direction, Giles leant out of his window and shouted, “Get off your bikes!” at the riders, many of whom were children, prompting Vine to post the video on Twitter with the caption, “Words fail”.