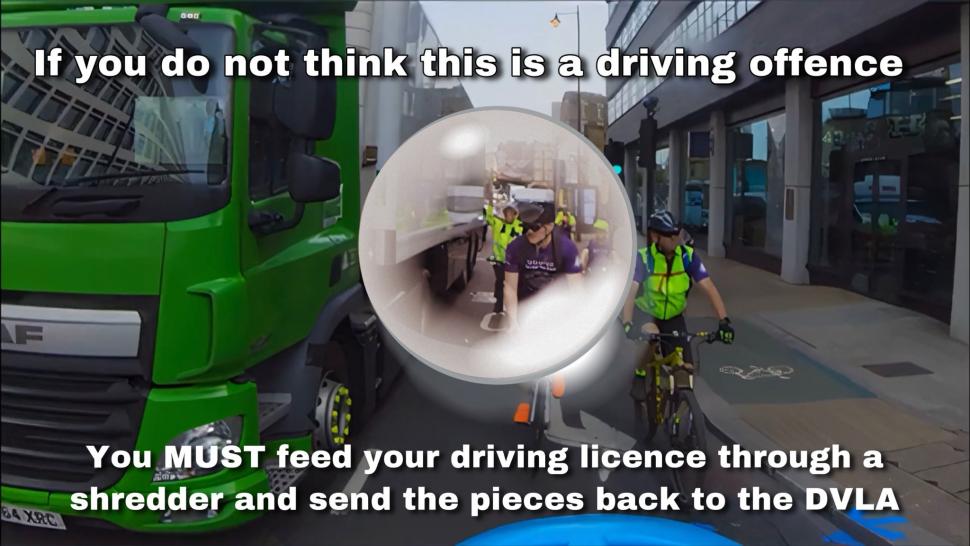 A video posted on Twitter last week by Jeremy Vine showing a Waitrose lorry driver making a close pass on a member of the Metropolitan Police Service’s Cycle Task Force is continuing to make waves online – with a petition now launched calling on the BBC to sack the broadcaster after the driver was reportedly suspended by the supermarket operator. However, Waitrose says that isn’t true and that the driver, whom it supports, is still working there.

Vine had been riding with a group of cyclists including several Met officers as well as Detective Chief Superintendent Andy Cox of Lincolnshire Police, who was on his annual fundraising challenge on behalf of the charity RoadPeace when the driver of the Waitrose lorry overtook them.

Footage shot by Vine on his helmet cam shows how the driver came within inches of hitting one of the riders who was in uniform, including a hi-viz jacket with the word ‘police’ written on the back.

Out cycling with HIGHLY VISIBLE police officers — and a massive @waitrose truck actually close-passes one of the @MetCycleCops! Take a look and see his reaction.

In the video, the officer on the receiving end of the close pass, said that the lorry’s wheels were “touching the line” as he passed the cyclists.

“He thinks you’re on one side, he’s the other side, so he’s fine,” replied Vine.

“He’ll get undue care and attention for that,” the officer confirmed.

However, a number of Twitter users, some of them also HGV drivers, claimed that the lorry driver had done nothing wrong since he had stayed in his lane.

That prompted DCS Cox – who is the national lead on fatal collision investigation at the National Police Chiefs’ Council – to tweet in response that “The point lost by so many commenting on this thread is… Drivers have a responsibility to protect vulnerable road users. That way everyone gets home safely, alive.”

Despite that response from a senior police officer, the petition, hosted on the website Change.org and to date signed by more than 3,800 people, claims that the video posted by Vine, who hosts a lunchtime show on BBC Radio 2, is “clearly showing the driver had not committed the offence he was accused of.”

The petition – the full text of which appears at then end of this article – also claims that the video has resulted in the driver being “suspended from his job.” However, it turns out that is not true and Waitrose has said it supports the driver, whom it insists has done nothing wrong.

According to the website trans.info, the rumour that the driver had been suspended was begun by “lorry driver/influencer” Luke C in an HGV in a post on Facebook last Thursday.

He wrote: “Turns out the Waitrose & Partners Driver has been suspended pending further investigation! If this driver gets the sack that is absolutely outrageous! That lorry driver did absolutely nothing wrong. Stayed in his lane and didn’t injure the cyclist whatsoever.”

The HGV driver and YouTuber subsequently contacted Waitrose, who told him:  “Please be assured this is not correct – the driver in question is still working for us.”

Waitrose added: “We’ve had a look into this and having reviewed the footage, it does look as though our driver used the correct positioning whilst travelling on a narrow lane.”

Jeremy Vine appears on both the BBC and Channel 5; he is no stranger to controversy: In October 2021, Ofcom received at least 300 complaints about the content of his Channel 5 show.

In May 2022 his show resulted in a complaint against an HGV driver who has since been suspended from his job, despite the video evidence from Vine's show clearly showing the driver had not committed the offence he was accused of.

It is likely the public have a limited amount of leverage when complaining about the content of commercial TV. However, as a publically-funded service, the BBC must be answerable to the licence-fee payers for the conduct of their employees, whether that be within or outside their own broadcasting purview.

For a very high-profile BBC employee to act as Vine has done in promoting unfair accusations against a hard-working member of the public, one of the people partly-responsible for paying his BBC-reported salary of £320,000-324,999, is intolerable and an insult to all HGV drivers across the country.

The 300,000-plus HGV drivers of the UK have a very demanding, essential, yet unappreciated role in society. Generally they are highly conscious of the safety of Vulnerable Road Users (VRUs); many undergo specific training created by organizations such as FORS & Transport for London, purely to safeguard VRUs. They should not be vilified on TV by cheap, sensationalist reporting of the kind promoted by Jeremy Vine.

The BBC should remove Jeremy Vine from their Radio and TV programming immediately.