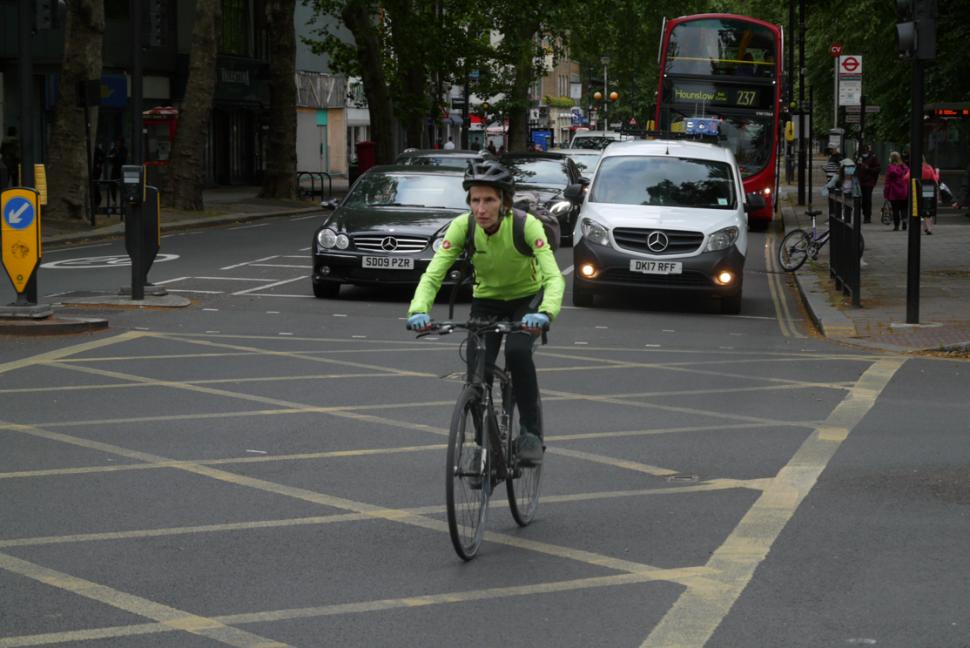 Fair Fuel UK founder Howard Cox has accused Jeremy Vine of “politicising” cycling and “fuelling a war between drivers and cyclists” – an interesting take given that just last week, an All Party Parliamentary Group published a report written and paid for by his organisation that was highly critical of government transport policy that it claimed focused on the “privileged cycling few.”

Cox made his claims in an interview yesterday with Colin Brazier of GB News in response to a Twitter post by Vine earlier this week showing footage of bike riders quite legally riding four abreast.

The broadcaster, whose video was filmed by dashcam from the car he was driving – yes, cyclists and motorists are more often than not one and the same person – explained in a voiceover: “This is exactly how cyclists should ride, they are calming the traffic behind them, we won't overtake unless we have a really wide clearance.”

Referring to the footage, Cox told Brazier: “Blocking a road will make people take bigger risks and lead to worse accidents – it’s ridiculous. Vine is fuelling a war between drivers and cyclists,” he insisted.

“This is part of a long-term anti-driver rhetoric that he’s been going on about – he is encouraging cyclists to act as roadblocks to stop drivers overtaking.

“The Highway Code states you should never ride more than two abreast and preferably ride in narrow or single file,” Cox continued, quite correctly. “This advice is not a legal requirement, it's advice, so how can we police this?”

He added that “most cyclists are very, very good” and “very kind people,” before railing against “these cycling zealots which are led by Jeremy Vine.

"He may be a national treasure but I am afraid he is hellbent and I think he is politicising this against the BBC’s code of ethics!”

Cox’s appearance on GB TV comes just days after Fair Fuel UK paid for and produced a report on behalf of the All Party Parliamentary Group for Fair Fuel for UK Motorists and UK Hauliers entitled What does the 2030 fossil fuelled new vehicle sales ban really mean to the economy, environment, and UK’s 37m drivers?.

There are repeated references throughout the report to it aiming to give a voice to “the UK’s 37 million drivers” – described as “hard-pressed” and “perennially demonised,” and all for the benefit, apparently, of cyclists, supported by the policies of a “virtue signalling government” and a “political bias … towards cyclists, particularly in urban areas.”

“It is critical a long-term road transport strategy is put together that benefits and unites ALL road users with an emphasis on public transport and freeing up our congested roads,” the report says.

“Residents, businesses, motorists are incensed with current political policies such as the discord created by Local Traffic Neighbourhood schemes and Cycle Lanes causing blockades, congestion, and deferred pollution,” it claims.

“The APPG and Fair Fuel UK call on the Government [to instruct local authorities] to build new cycle schemes away from existing roads,” it continues, saying that “The growing conflict in road policy is being fuelled by a laudable but mistaken belief that cycling is the ultimate transport solution.

“While drivers and motorcyclists pay for all road space, the recent allocation of many existing urban highways is mostly for the benefit of a few who are ‘unrepresentative of the population at large’,” the report claims – even though road building and maintenance is financed from general taxation.

Cox writes in the report “I am on record asking cycling leaders to work with Fair Fuel UK to create a long-term road user plan that benefits all road users, the environment, road safety and the economy.”

That’s difficult to square, however, with the recommendation that the government “Instruct local authorities to build new cycle schemes AWAY from existing roads” – without suggesting how that might be achieved in reality, nor the likelihood that such routes would of necessity go round the houses and be ignored by people simply wanting to get from A to B by bike in as direct and as safe a manner as possible.

Take the London junction where Dr Marta Krawiec died last week while riding to work on one of the busiest cycling corridors in the capital, where cyclists make up more than half of rush-hour traffic yet there is no dedicated cycling infrastructure, and where there is simply no alternative route where it could be put; many would view one subtext of the report as being that the roads would be better with no cyclists at all on them.

“Drivers were happy to coexist with cyclists, even though many on pedal power ignore the rules of the road,” Cox insists – although government statistics it was speeding motorists, not cyclists, who were responsible for 12 per cent of road deaths in Great Britain during 2018, for example.

“Cycling had a chance to prove it could make a meaningful contribution to travel in this country if only its advocates would cut out their belief that they have a majority right to road user-ship,” he continues – despite the fact that what campaigners are calling for is infrastructure to encourage people to be able to make a decision about which mode of transport best suits their journey and if that choice is by bike rather than car, to feel safe while doing so.

Cox is keen to blame what he terms “a ‘them and us’ struggle” not only on Vine, but on “a very highly vocal minority of militant cyclists,” as well as the policies of central government led by Boris Johnson and, in the capital, the Mayor of London Sadiq Khan, and claims that “perennially demonised drivers are calling for common sense to close the divide once and for all.”

The evidence from articles in mainstream newspapers such as the Mail or Express and the comments below them, or remarks made by motorists calling radio phone-in shows, suggests otherwise.