Fair Fuel UK, the pro-motoring lobby group that consistently opposes measures by central and local governments to curb car use and promote active travel, has been accused by Cycling UK of “rigging” its Annual Road User Opinion Survey, the 2020 edition of which was launched yesterday.

Among the criticisms levelled by the national cyclists’ charity are that the survey is designed around “leading questions” – ie ones that aim to provoke a certain desired response.

A number of those are related to cycle lanes and low traffic neighbourhoods (LTNs), initiatives that Fair Fuel UK has consistently opposed.

Just last month, the group was co-signatory to a letter from the All Party Parliamentary Group Fair Fuel for UK Motorists and Hauliers which called on Transport Secretary Grant Shapps to withdraw support for emergency cycle lanes and LTNs.

Despite that letter receiving widespread coverage in national and local newspapers, and Fair Fuel UK promising that its survey results “will be published in the press,” the group claims on the opening page of its poll that “With Covid & Brexit dominating media and political attention, road user issues are getting little media coverage.”

However, a Google News search with the group’s name reveals that founder Howard Cox has regularly been quoted in the press in recent months, and print and broadcast media, both local and national, have regularly covered issues including LTNs and cycle lanes – certainly there was no shortage of reporting on the removal of the Kensington High Street one last week.

Fair Fuel UK says that “Motorists, cyclists, businesses, truckers, taxis, van drivers, buses, coaches, pedestrians are welcome to take part” in the survey, adding that “It is important a wide spectrum of responses are received.” 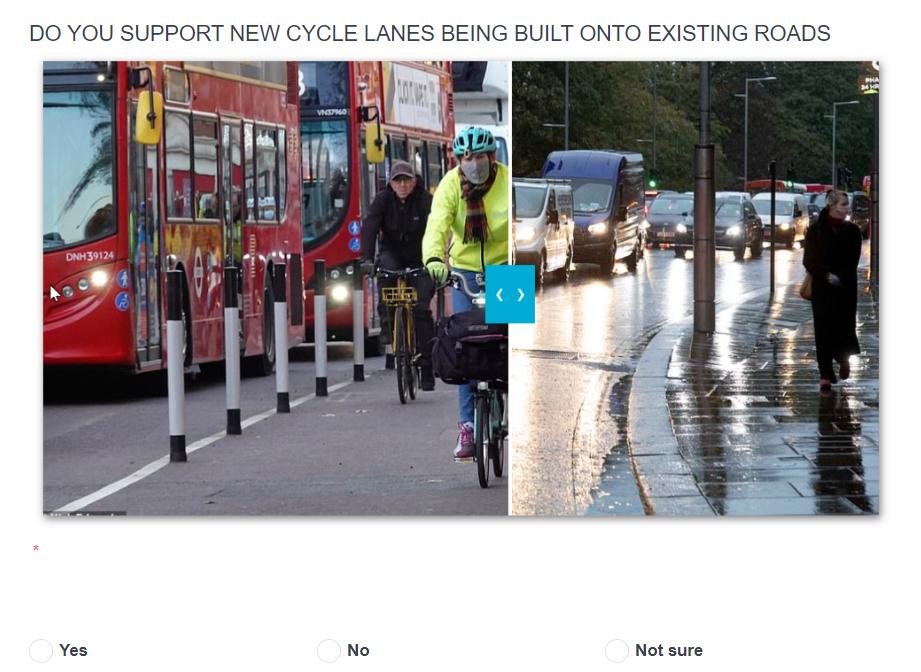 But even without knowing the group’s history or positions, the way some of the questions are phrased gives a strong hint of where it is coming from – for example, “From recent media reports, unelected special advisors in No 10 are influencing the roll out of cycle lanes. What do you think about this?”

Clearly a reference to Boris Johnson’s transport advisor Andrew Gilligan, the choice of responses are “No problem,” “Its fine” and “Don’t know.” Another question, with responses of “Yes,” “No” and “Not sure,” asks “Has rolling out hundreds of miles of dedicated cycle lanes during the pandemic been the right time to implement?”

The next question meanwhile includes the obligatory reference to so-called “road tax” as it asks: “Should road cyclists be made to adhere to the same road user rules that drivers legally must follow, such as:

Questions relating to cycling and LTNs take up around half of the survey, with others relating to the potential introduction of road tax and planned phasing out of petrol and diesel-fuelled vehicles by 2030.

Commenting on the survey, Duncan Dollimore, Cycling UK’s head of campaigns, said: “It’s nearly Christmas, so it must be time for Fair Fuel UK’s annual ‘how much do you hate cycling’ survey.

“Whilst all road users are welcome to take part, some are more welcome than others, with the first nine questions all devoted to cycle lane bashing. But fear not, if you love a rigged survey there’s plenty more leading questions to follow on low traffic neighbourhoods, hard done drivers and the biased BBC.”

He added: “Rumour has it that one year Fair Fuel UK will pay for a polling company to conduct one of their surveys, but where’s the fun in that? Who wants truth, transparency in polling and standards for ensuring the reliability and validity of results if it doesn’t fit your toxic narrative?”

In an email, Fair Fuel UK founder Howard Cox reiterated that the survey was intended to canvas the opinions of all road users and refuted Cycling UK's accusation that it was rigged. He also insisted that the group was willing to try and "bridge the divide" between cyclists and motorists.

He said: "Our intentions are clear and always have been, as shown on a Twitter interchange (see below) with Jeremy Vine, one of your champions, who I have the utmost respect.

"I repeat my call to you to work together and to bridge the divide that has gotten too big and is not helped by the zealots on both sides.

"The results of this survey will be published, broken down by road user type and by other ways to slice up the responses. This is a conventional approach."

I'd really like to have a constructive discussion with U Jeremy instead of Twitter points scoring. The countless requests from us to work together with cycling groups are ignored, or returned with abuse. We have to bridge this divide, I'm keen to make it happen,will U help please