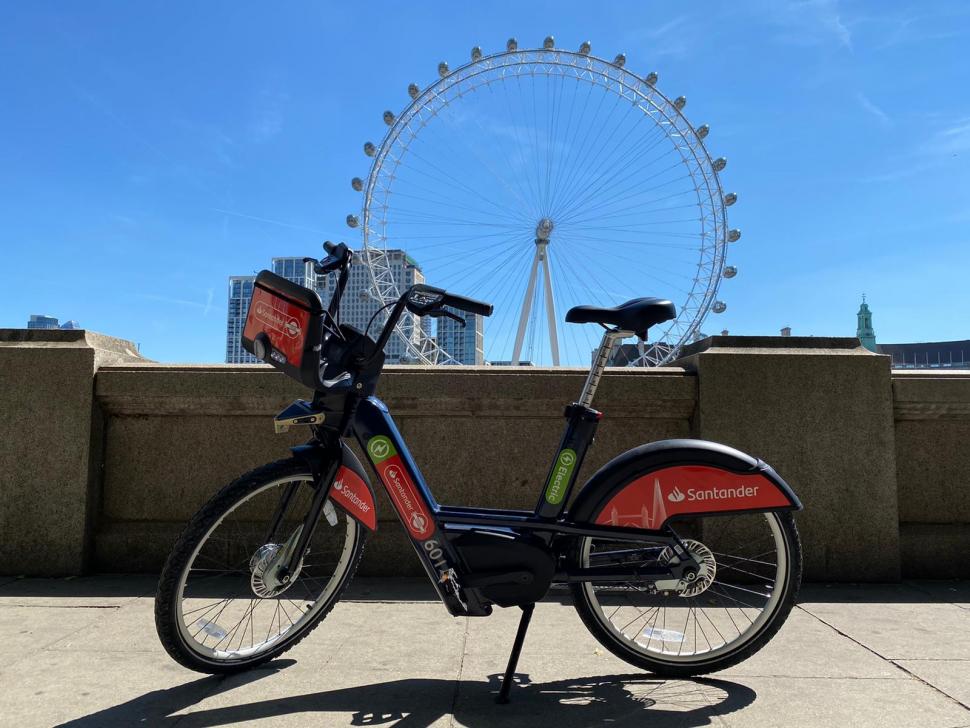 > ‘Boris e-Bikes’ set to be trialled in North London

While dockless e-bike schemes have operated in some boroughs since Lime launched in Ealing and Brent in 2018, they have not been included in the Santander Cycles scheme until now – but that is set to change in the coming weeks.

> London gets its first dockless e-bike hire scheme with Lime

TfL also says that it is changing tariffs under the scheme, with a £1.65 flat rate per 30 minutes replacing the current £2 access fee for standard bikes, and it will also introduce monthly membership costing £20 which will allow hirers to make unlimited rides lasting up to 60 minutes.

To begin with, e-bikes will only be available to registered users of the scheme, and will cost £3.30 for 30 minutes, plus an additional £1 to take the period up to one hour, with the bikes going live on 12 September.

TfL says that the scheme saw its  busiest ever month in July, and today it has also confirmed that new docking stations will be installed in Southwark.

Mayor of London, Sadiq Khan said: “I am delighted to be launching our first ever e-bikes for hire. Another first for London hot on the heels of another record-breaking month for Santander Cycles, which saw an incredible 1.3m journeys in July. It will be great to see these new e-bikes on London’s streets soon.

“I’m determined to continue building a cleaner, greener London for everyone and this includes making cycling as accessible as possible. The new Santander Cycles e-bikes will play an important role in helping to break down some of the barriers that stop people from getting on a bike, including fitness, age and length of journey.”

TfL added that to enable systems to be changed to accommodate the new features, the scheme will be closed for upgrades from 2200 on Friday 9 September and 0600 on Monday 12 September.

Meanwhile, following our report yesterday that Westminster City Council is removing dockless hire e-bikes dumped on the borough’s streets by users, the shared mobility charity CoMoUK is calling on the council to discuss solutions with operators.

The borough does not currently have partnerships with any e-bike hire schemes – the bicycles being left there are being hired in adjacent boroughs – and one solution from CoMoUK is that Westminster allows bikes to be left in geo-fenced parking areas currently available there to people renting e-scooters.

Antonia Roberts, the charity’s deputy chief executive, said: “Westminster has some of the worst air quality in the entire country, and shared e-bikes are a vital part of the solution to delivering the council’s Climate Action Plan.

“There is a firm willingness by operators to go to extra lengths to implement a scheme which works for all parties in Westminster, and they would welcome the opportunity to reach a solution with the council,” she added.

1
"Check the Highway Code": Police officer claims cyclist shouldn't ride "in the middle of the road"
2
Road rage van driver who assaulted cyclist, knocking him unconscious, handed suspended sentence
3
Cyclist hurt after eggs thrown at her by car passenger
4
Police officer caught on camera telling cyclists to ride in single file to be given "education around traffic offences"
5
Cycling UK slams Government and threatens legal action for "excluding" cyclists and horse riders from new Wainwright Coast to Coast National Trail
6
Snake Pass section shuts to all road users... but cyclists can still reach the summit (and turn back around)
7
Footage of cyclist's encounter with mountain goat "on steroids" goes viral
8
Driver "used bus as a weapon" against cyclist, loses appeal over sacking