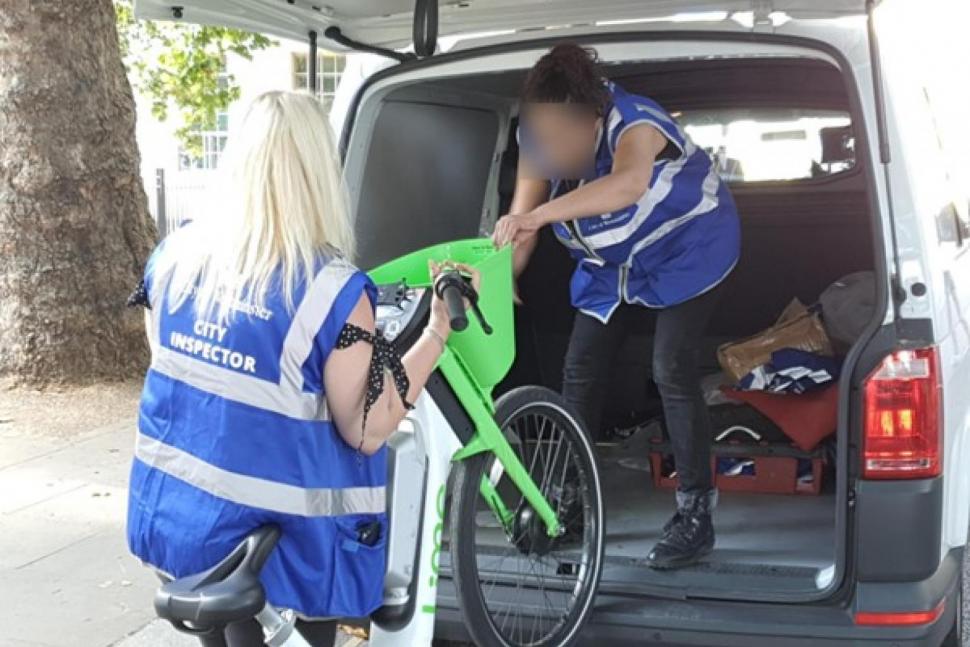 Westminster City Council (WCC) has started removing e-bikes dumped by hirers from its streets, claiming that they create a dangerous “obstacle course” for pedestrians, and pledging that the money raised from hire firms to return the bikes to them will be spent on improving cycling infrastructure.

While a number of neighbouring boroughs permit dockless e-bike hire schemes from operators such as Dott, Human Forest, Lime and Tier, WCC does not – but that has not deterred hirers from leaving their bikes there once their trip has finished.

The council, control of which passed from the Conservatives to Labour in May, says it is supportive of cycling, but is now seeing hundreds of e-bikes dumped on its streets every day, creating a hazard for disabled and elderly residents in particular.

As with the first wave of non-electric dockless hire bikes that hit the UK in 2017 from the likes of Mobike and the now-defunct Ofo, the clutter they cause on pavements when people park them outside of designated areas has put local authorities at loggerheads with operators.

WCC says that it has “attempted to engage with the major dockless bike operators and still hopes to find a solution which improves cycling in the city but has been inundated with complaints about blocking access to pavements roads.

“The severity of the issue has grown throughout the year with people returning to the city following the end of Covid restrictions,” it added, highlighting that e-bikes “bikes are regularly found blocking pedestrian crossings and obstructing the pavement – forcing pedestrians and wheelchair-users to move into the road and putting their safety at risk.”

Councillor Paul Dimoldenberg, WCC’s Cabinet Member for City Management and Air Quality, said: “The council has begun seizing dockless bikes that we find blocking pavements and roads in Westminster. Trying to walk down some of our streets has become like attempting an obstacle course and we are fed up finding these bikes dumped across the city.

“Anyone in town this summer will see these cycles abandoned. It’s a nuisance and potentially dangerous, especially for those with disabilities.

“We’ve contacted the major dockless bike operators and made it clear that if they don’t remove their bikes from the pavement the council will - and we’ll charge them for doing so.

“Any money we raise will go towards improving cycling infrastructure on our streets.

“Westminster City Council is supportive of cycling and the many benefits it brings, particularly when it comes to cleaning up air quality,” he added.

“We want to find a solution that works for everyone but, in the meantime, people living and visiting Westminster shouldn’t have to put up with this every day.”

US company Lime was the first dockless e-bike operator to establish a presence in London back in 2018, and subsequently bought rival firm Jump from Uber.

> London gets its first dockless e-bike hire scheme with Lime

The company’s senior public affairs manager, Hal Stevenson, urged users to park their bikes in a responsible manner once they finish their ride.

Quoted on MoveElectric, he said: “We are committed to working with WCC, other operators and wider stakeholders to resolve these issues, and will be putting forward a cross-operator package of measures aimed at more effectively managing e-bikes that have been left in the borough.

“If you ride Lime in London, please remember to park responsibly, and never leave a bike in a way that obstructs the pavement, or makes someone else's journey more difficult.”

"We will collaborate with Westminster to ensure they have access to our wide range of tools which ensure our vehicles are parked sensibly and local people can access sustainable transport.”

1
"Check the Highway Code": Police officer claims cyclist shouldn't ride "in the middle of the road"
2
Road rage van driver who assaulted cyclist, knocking him unconscious, handed suspended sentence
3
Driver "used bus as a weapon" against cyclist, loses appeal over sacking
4
Hit-and-run driver moved unconscious cyclist off road before fleeing scene
5
Cyclist bitten by dog… and then abused by owner
6
Why was Mark Cavendish riding with Lance Armstrong this week?
7
Five-year-old boy killed after van driver knocks him off bike
8
Want the “fastest socks on the planet”? They’re yours for €1,000 + more tech news from Campagnolo, Rapha, Van Nicholas...