Happy Monday! There's loads to get through today, and that's just the Paris-Roubaix reaction...Dan Alexander will be doing his best to stay at the head of the race... 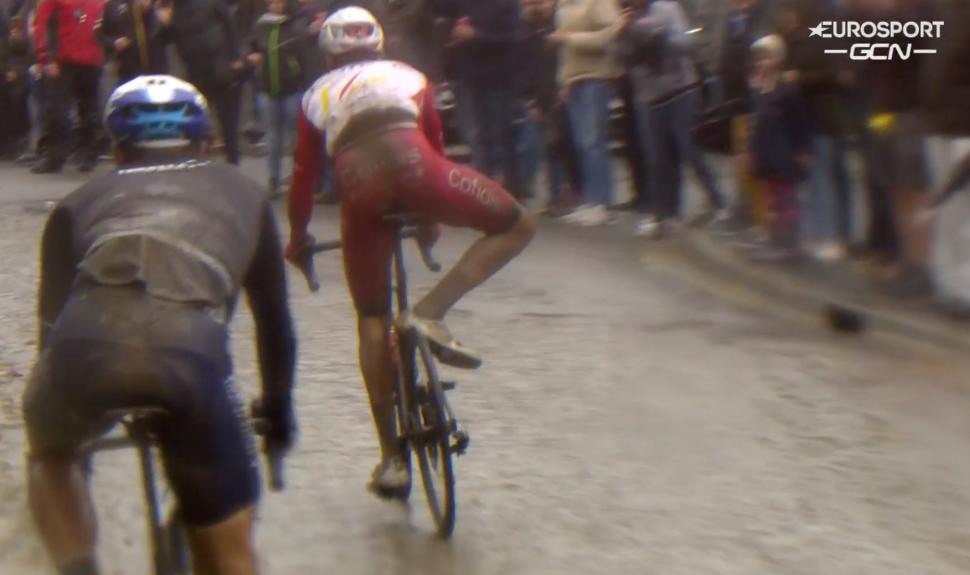 04 October 2021, 16:31
Morning bike commuter one of many trying to let ambulance past Insulate Britain protest on Wandsworth Bridge

Insulate Britain activists attempted to block Wandsworth Bridge in South London, furious motorists weren’t having any of it & did what the police should be doing.pic.twitter.com/EfqW8X26PB

Loads of talk around today about protests...and there's a cycle commuter in here trying to help get the paramedics through Insulate Britain at Wandsworth Bridge. It's an interesting comparison to the Stop Killing Cyclists demonstrations across London where news editor Simon recalls seeing event organisers quickly act to move everyone out of the road to let ambulances through, before resuming the protest. 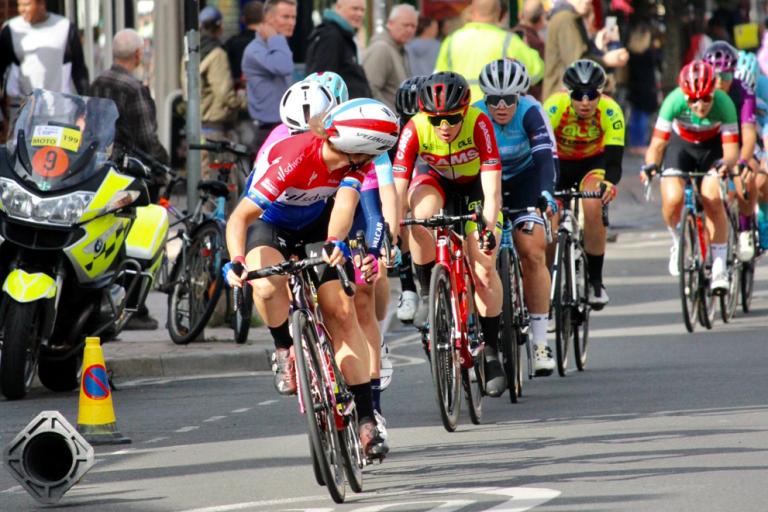 Laporte Man of the Match pic.twitter.com/VeoEor0Fvy

Christophe Laporte sprinted to sixth place from the group containing Wout van Aert and Yves Lampaert. The best result of his career in a Monument. Impressive. Even more impressive considering earlier in the day he was using his foot on his rear wheel after his brakes stopped working.

Deceuninck-Quick-Step hopeful Florian Sénéchal also reported braking issues, prompting some to question whether discs were the best kit choice for the race...

On Twitter, John Galloway argued: "Also for the record. Discs are a stupid choice for Paris-Roubaix. Slow wheel changes and with certain pads they lost the ability to stop in a race where braking is not an issue for rim brakes. Forget evangelism, embrace pragmatism. They're mostly fantastic, sometimes there are better choices."

Defective brakes? Riders stopping their bike by putting their shoe on their back wheel? https://t.co/S3H0pVDNgM

Just crap mechanics putting the wrong pads in. It was a day for a sintered pads, as any Cyclocross or mountain bike ride I would have told you

Rim brake pads get eaten in conditions like that.

This is a marketing opportunity...disc-specific cycling shoes, complete with emergency brake-block on the toes. They could even include a charging port for when your Di2 runs out of juice.

road.cc Liam reliably informs me the pad choice theory is a decent bet, the pros would have undoubtedly been better served on sintered pads, not organic ones which can struggle in such wet and muddy conditions and work fine in cyclocross. We'll never know, but it's also something that could have been made worse by Laporte dragging his brakes if he was trying to avoid sliding out on the cobbles. Other possible issues could be to do with the piston or hose...

Which would you rather ride through a wet Roubaix?

04 October 2021, 16:20
What you might have missed while watching Paris-Roubaix...Greipel retires, Cav wins again

Let's start this week with a standing ovation for this man. Congratulations on an outstanding career @AndreGreipel 👏

While the rest of the world was watching Paris-Roubaix, Mark Cavendish and André Greipel danced the dance one last time. The German was riding his final race before retirement and waved goodbye to the crowds in Nienberge.

It was one of the Gorilla's great rivals who took the win, however. A certain Mark Cavendish won from a small group for his tenth win of the campaign. A meeting of two legendary sprinters...

04 October 2021, 14:39
A Kickstarter solution to staying seen as the long winter nights closing in?

There's a new eye-catching cycling Kickstarter, this time it's a bike reflector aiming to offer 360-degree visibility without affecting your bike's performance. The FLECTR 360 WING doesn't need batteries, maintenance and can't be stolen (unless they take the whole bike, of course), according to its designers. There's a challenge for British bike thieves...

What's more, for any performance addicts, it adds zero drag and weighs just four grams. Each reflector weighs one gram, but it's recommended you add two on each wheel front and back.

A good idea? 2,030 people on Kickstarter thought so, at the time of writing. The project has raised £69,105 of its original £9,846 target. Hey, it's got to be better than that GoFaster startup allowing riders to wear its kit one they've proved they're quick enough to wear it...

As expected the opening stage of the Women's Tour came down to a sprint, and it was Italy's Marta Bastianelli who took the win. Is there anything the Italians won't win this year?

Chloe Hosking was second for Lizzie Deignan's Trek-Segafredo team and Clara Copponi third. Britain's Hannah Barnes and Josie Nelson both earned a top ten result in Banbury. Bastianelli will of course wear the leader's jersey tomorrow. Talking of which, it's a circuit race around Walsall. Nine laps of a largely flat loop before the town centre finish.

Highlights of today's stage will be shown on ITV4 at 9pm... 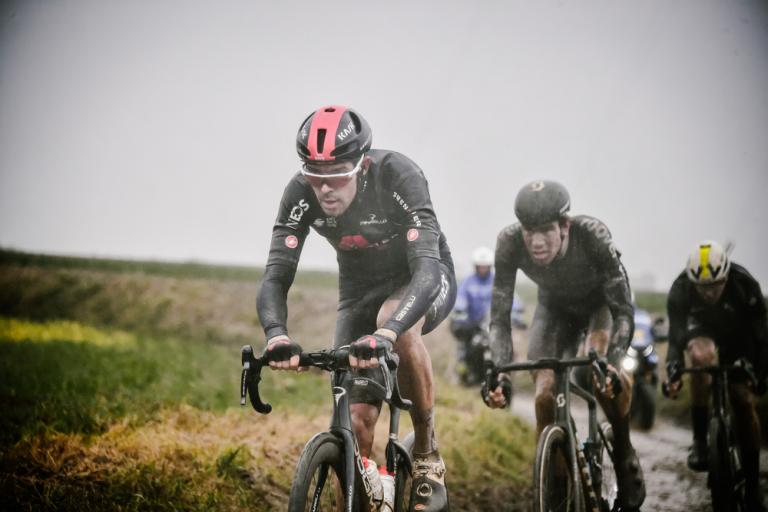 I'm calling a brief Paris-Roubaix timeout...there's just too much brilliant stuff from yesterday. We'll resume the cobbled brilliance after lunch. For now, here's PedalMe helping someone move house by bike...

The future of cross-London flat moving transportation. Shout out to the amazing @pedalmeapp cyclist - she even helped me up the stairs with the mattress. I’m having a sit down and she went off pedalling across London! pic.twitter.com/fSmyKxF2JP

And some eagle-eyed CCTV scanning...

After reading your tweet, I spotted this one ... wonder if that's your flat on the move?https://t.co/1ozF6ttNxe 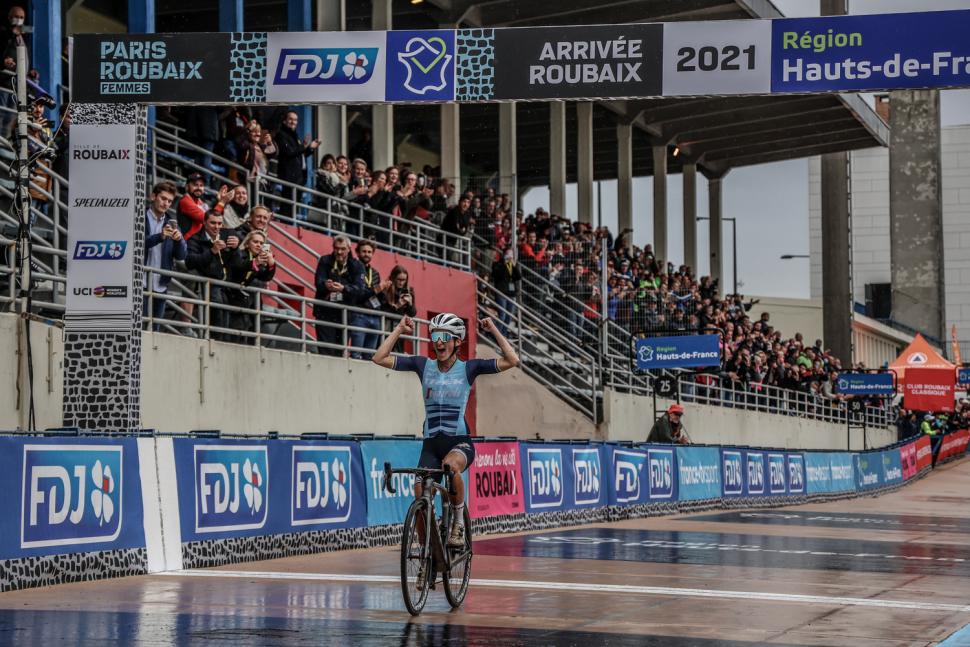 Today's stage is from Bicester to Banbury, before the race dips into the Midlands for tomorrow's Walsall stage and Wednesday's time trial in Atherstone. The week ends in Essex and Suffolk...Thursday is Shoeburyness to Southend-on-Sea, Friday is Colchester to Clacton-on-Sea, while Saturday's finale will take the peloton from Haverhill to Felixstowe.

Frustratingly, the race isn't being broadcast live, but there will be highlights on ITV4 at 9pm tonight and then 8pm for the rest of the week. We'll keep you updated with the stages here on the live blog... 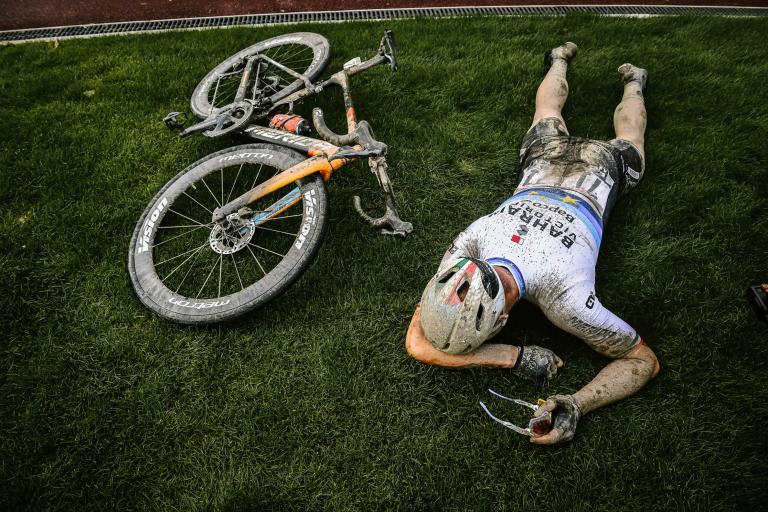 The bikes that won Paris-Roubaix - Tubeless, disc and aero for Colbrelli and Deignan

After the cobbles had been tamed and the mud washed out of eyes, the Trek Domane SLR 9 and Merida Reacto Team-E stood as the winning steeds of Paris-Roubaix 2021
22
04 October 2021, 09:39
Roubaix bog snorkelling

Cycling bog snorkelling is unbelievably already a thing. A nudge towards 14 of the world's incredible cycling world records. Number six? Yep, it's mountain bike bog snorkelling. Graham Robinson holds the fastest time on the Llanwrtyd Wells course, but shoutout to road.cc Dave who won the event two years running. The big question: could he beat a topless Frenchman who's been on the beers all morning?

04 October 2021, 07:20
Smell of the North: That wasn't mud on Matteo Jorgenson's shorts...Movistar rider apologises to families who saw him pulling a Dumoulin at Paris-Roubaix

Everyone had brown shorts by the end of Roubaix...

Matteo Jorgenson's place in the front group was lost thanks to "six hours of cow shit and mud in the mouth taking my stomach for a ride and a half". The young American took to Instagram to tell the tale of how he scarred several young families for life by adding to the Roubaix sludge...

The Movistar rider was in the same group as Mathieu van der Poel after the infamous Trouée d'Arenberg sector, but waddled home a few pounds lighter in 65th place after an unfortunate pit stop.

"Sometimes, nature calls and you have literally no choice but to answer," Jorgenson laughed. "Apologies to all the women and children who just wanted a wholesome day out watching Paris-Roubaix, but this is the Hell of the North. Six hours of cow shit and mud in the mouth took my stomach for a ride and a half. Maybe next time I can stay in the winning move once I make it."

The jokers in the comments had fun with Matteo's misfortune, one dubbing it the "winning movement", another congratulating him on being a "hitter"...well, it rhymes with hitter. Ask Tom Dumoulin, it happens to the best of us...

On the bright side, winning Giro D'Italia has never been closer for you.

There was a moment yesterday when it seemed as though, after 30 months of absence and expectation, one of pro cycling's least popular names was going to spoil the party...

Alas, Gianni Moscon punctured, got a new bike with rock-hard tyres, bounced over the cobbles and crashed. The trio of chasers caught up, dropped him, and left the soon-to-be Astana rider one step off the podium in fourth.

It's fair to say there wasn't much sympathy for the Italian during, or after, the race...

I can't imagine how on the limit he must have been when he made his racist comments.

I can't speak for anyone else but I'm just so happy that Moscon got dropped that I really don't even give a shit who wins now.

Buckle up for a 'why Moscon is peloton enemy number one' history lesson. During the 2017 Tour de Romandie he racially abused French rider Kevin Reza, resulting in a six-week suspension. Later in the year he was accused of deliberately causing Reza's teammate Sébastien Reichenbach to crash. Lack of camera evidence meant the case was dropped. To top off the year, he was then disqualified from the World Championships Road Race for holding on to a team car.

At the 2018 Tour de France, Moscon was kicked off the race for punching Élie Gesbert, and then at Kuurne-Brussels-Kuurne last year he was disqualified for throwing a bike at Jens Debusschere after a crash...nice chap.

The Hell of the North lived up to its title. The first wet edition in 19 years was as brutal/ chaotic/ hectic/ epic as expected. It even made getting out on the bike at half seven in full winter gear worth it. There were crashes, motorbike falls, punctures, Adam Blythe meltdowns, Christophe Laporte using his foot as a brake, Matteo Jorgenson ditch dumping, finish line scenes, and that's just the stuff we saw.

AG2R Citroën's team car taking a spill was one of the many incidents the TV cameras missed, but thankfully a well-positioned fan didn't let this prime content go to waste.