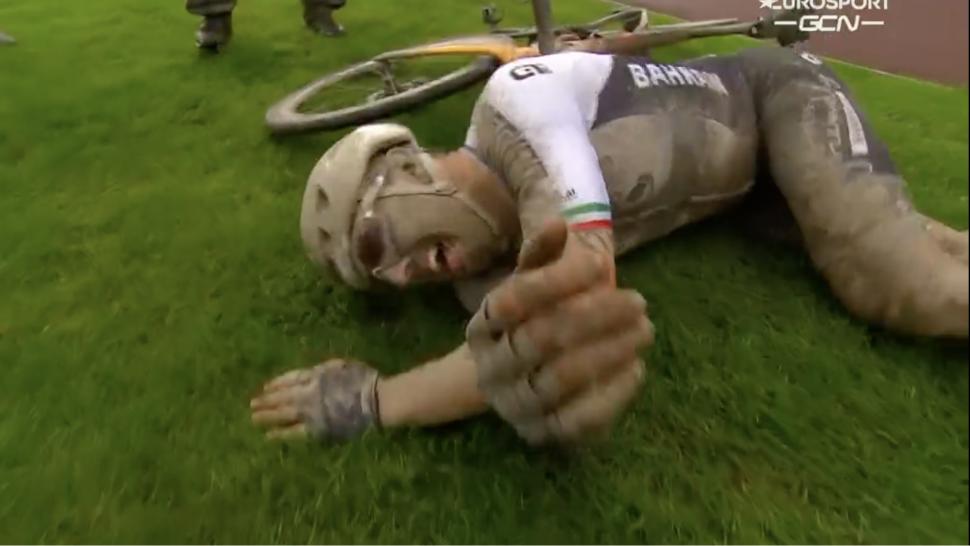 The first rainy Hell of the North in nearly two decades was a slightly dramatic one..
by Will Bolton

Sonny Colbrelli sobbed with joy as he crossed the line to take victory after 260km of mud covered madness on the cobblestones of Paris-Roubaix.

This year's Hell of the North was the first rainy edition for almost 20 years and it was a dramatic one.

The slippery mud slicked cobbles sent riders (and camera motorbikes) flying left and right into water filled ditches throughout the day after a breakaway went clear and the race exploded into anarchy with around 200km to go.

With 50km to go, Gianni Moscon (Ineos) found himself alone at the front of the race while behind him were Florian Vermeersch (Lotto Soudal) and Tom Van Asbroeck (Israel Start-Up Nation) in a two man group.

Behind them, Mathieu van der Poel (Alpecin-Fenix) led a group of chasers and with 30km to go Moscon suffered a rear wheel puncture which drastically cut into his lead.

A 'peloton' containing Wout Van Aert (Jumbo-Visma) had been in contention but by the final 40km kilometres they were around 2 and a half minutes back and seemingly out of the race.

Moscon still had a 45 second gap after a quick bike change but then with 26km he came off his bike hard on a particularly slippery section of cobbles.

There was speculation that the tyre pressure on his new bike was far too high and he did appear to be skating over the cobbles more than he had been before.

The rain eased as Moscon raced towards the finish but over the five star section Carrefour de l'Arbre the Van der Poel group - now made up of just MvdP, Colbrelli and Vermeersch - finally reeled him in.

They dropped Moscon almost immediately and the three mud caked riders, all of whom were making their Roubaix debut, continued on together to the velodrome.

Vermeersch tried in vain to go for a long attack but Colbrelli proved strongest and in the end comfortably saw off the competition.

Co-commentator Magnus Bäckstedt concluded: "It doesn't matter if you are the first rider in the race, or the last, it's the same.

"You have gone through hell to get to the finish line."